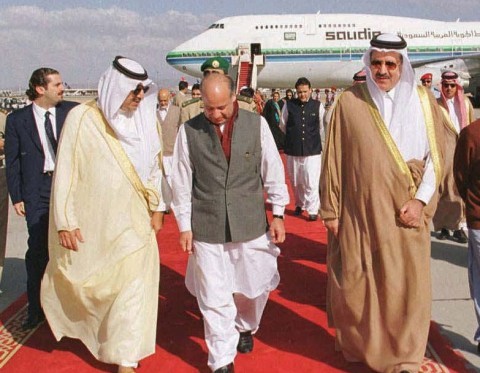 Saudi Arabia’s campaign against Houthi rebel forces in Yemen, which began with waves of airstrikes overnight on Thursday, has laid down a new marker in the dangerously unstable Middle East.

As WorldViews discussed earlier, the Saudis coordinated their action with a coalition of Sunni majority countries, sharpening the perception that the offensive was part of a wider regional conflict with Iran, a Shiite power that has backed the Houthis and is locked in a larger game of geopolitical chess with the Saudis in various corners of the Middle East.

One conspicuous nation among the list of countries official Saudi media claimed had “declared their willingness to participate” in the anti-Houthi action is Pakistan. A non-Arab state with a sizeable Shiite minority, Pakistan also has an overstretched military, which is wrestling with its own extremist insurgency in the rugged borderlands near Afghanistan.

Yet on Thursday, a statement from the office of Pakistani Prime Minister Nawaz Sharif indicated that a delegation of top Pakistani officials would possibly travel to Riyadh to coordinate assistance, though it’s not clear whether that means Islamabad is actually willing to commit strategic resources to the fight in Yemen.

“The Prime Minister said Pakistan enjoys close and brotherly relations with Saudi Arabia and other [Gulf] countries and attaches great importance to their security,” the statement read.

“The meeting concluded that any threat to Saudi Arabia’s territorial integrity would evoke a strong response from Pakistan.” (Nevermind that in this instance, it appears Saudi Arabia is leading an intervention into the territory of another state.)

On one level, this is partly down to Sharif’s personal politics. Saudi Arabia gave the Pakistani prime minister sanctuary in 2000 following his earlier ouster in a military coup. Last year, a rare visit by the then Saudi defense minister – now, the current King Salman – to Pakistan led to Sharif’s government joining the Saudi call for the departure of Syrian President Bashar Assad.

But Islamabad and Riyadh’s ties run far deeper than that. Both countries in their own way are deeply ideological states, and they’ve forged vital partnerships over the years — deemed by one former Saudi intelligence chief as “probably one of the closest relationships in the world between any two countries.”

Most famously, the Saudis funneled aid and money through Pakistan to build up the Afghan mujahideen fighting Soviet occupation in the 1980s. That eventually spawned the Taliban and led to the emergence of al-Qaeda.

Pakistani critics frequently lament the corrosive effect Saudi funds – and the kingdom’s orthodox, Wahhabist ideology – had on the evolution of political Islam in Pakistan and the blossoming of hundreds of madrassas, or religious schools, throughout a country that’s steeped in a diverse array of Islamic traditions. Sectarian violence has claimed thousands of Pakistani lives in recent years.

But Pakistan left an important imprint on the Saudis as well. Dating back to the 1960s, Pakistan’s experienced military helped train the undermanned and underprepared militaries of a number of fledgling Arab states. The former Pakistani President Zia-ul-Haq once even commanded a unit of troops in Jordan tasked with combating Palestinian fighters.

A 2008 report in Brookings spells out the close military relationship with the Saudis, which shows there’s a precedent for Pakistani action in Yemen:

Pakistan has provided military aid and expertise to the kingdom for decades. It began with help to the Royal Saudi Air Force to build and pilot its first jet fighters in the 1960s. Pakistani Air Force pilots flew RSAF Lightnings that repulsed a South Yemeni incursion into the kingdom’s southern border in 1969. In the 1970s and 1980s, up to 15,000 Pakistani troops were stationed in the kingdom, some in a brigade combat force near the Israeli-Jordanian-Saudi border.

Pakistani engineers also helped build fortifications along the southern Saudi border, in part to help counter Houthi rebels, according to the Diplomat. Up until the First Gulf War, there was a detachment of thousands of Pakistani soldiers posted in Saudi Arabia.

The Saudi military has markedly improved its capabilities since those days; the kingdom recently became the world’s biggest arms importer. But Pakistani manpower still comes in handy in the petro-rich countries of the Gulf, where foreign nationals often staff a whole range of state institutions.

The Sunni monarchy that rules over Bahrain has employed thousands of Pakistanis in its security services, who, during the 2011 pro-democracy protests in the Shiite-majority country, delivered orders to protesters in English and Urdu.

“Our own [Shiites] cannot join the security forces, but the government recruits from abroad,” one Bahraini activist told Al Jazeera in 2011.

Opposition politicians in Pakistan are understandably concerned. “Given…our own internal sectarian terrorism, Pakistan cannot afford to get embroiled in any Shia-Sunni conflict in the Gulf and Middle East,” said Shireen Mazari, a leader of the Movement for Justice party, in a statement. “Pakistan must stay strictly neutral.”
Saudi Arabia, allies launch airstrikes in Yemen(0:49)