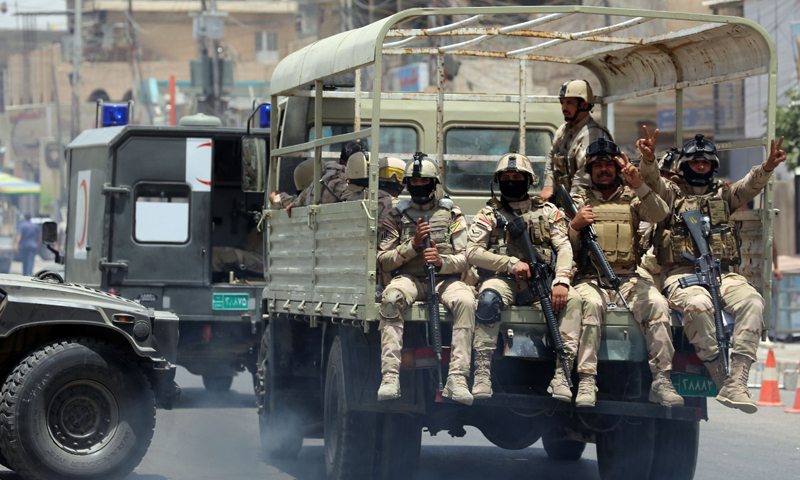 Iraq has descended into a full-blown civil war. The Jihadists have captured three towns and are marching on to Baghdad. They claim to have killed 1,700 prisoners in violation of Islamic and other laws governing warfare. They have also released gruesome pictures of mass execution of the captured Iraqi soldiers. Underlying this conflict is reportedly the old sectarian divide which has yet again resurfaced in Syria and Iraq.

The Islamic State in Iraq and the Levant (ISIS) has already taken over three towns in Iraq: Mosul, Takreet, and Tal Afar, have fallen to the militants.

The situation grew so bad so rapidly that it even alarmed President Obama, whose administration, until recently, was backing the Jihadists against the Syrian government.

“… We do have a stake in making sure that these militants are not getting a permanent foothold in either Iraq or Syria,” Mr. Obama responded earlier this week.

ISIS militants are fighting the Iraqi army on several fronts. The sectarian schism has brought militants from across the globe to fight against the Alawites in Syria and the Shia-led government in Iraq. The recently killed leader of the insurgents in Fallujah was an Algerian national.

Muslim countries cannot afford a resurgence of sectarian wars that kills thousands more and deprive millions of a healthy and prosperous future. If unchecked, these wars may spread to other countries in the Middle East and beyond. Pakistan needs to be on guard.

The US invasion of Iraq under false pretences (remember no weapons of mass destruction were ever found) indeed put an end to the brutal Saddam regime.

However, half a million Iraqis have lost their lives as a result. Iraq has descended into a civil war that has pushed the Saddam loyalists into the folds of Al Qaeda inspired militants. The US has spent billions on the Iraq war which saw five thousand US soldiers (besides Iraqis) losing their lives. Thousands more from allied countries also perished in Iraq.

Experts put the true cost of the US wars at $3 trillion.

In Syria too, the West’s misadventures, sponsored by special interests, have created a monster too big to contain. In their haste to counter Syria’s authoritarian regime, the US and others aided and abetted Al Qaeda affiliated militants who received hundreds of millions in aid and weapons from charities and rogue state agents in Saudi Arabia and other affluent Arab countries. The Saudis have, in the past, bankrolled Saddam Hussain’s wars. They are doing the same in Syria, and until recently, were joined by the Western states.

The prospect of Iraq falling back into the hands of Saddam loyalists, who now have shared interests with the militants, does not bode well for Iraq or for the larger Muslim world. The militants are motivated not by the desire to create modern Islamic states, but by hatred of other Muslim traditions they do not approve of.

The re-emergence of conflicts in Syria and Iraq along sectarian lines may spill into other countries. If these conflicts spread, they will threaten global energy supplies and trade routes. Global powers will intervene to protect their commercial interests. Such a development will further diminish the autonomy of countries suffering from the conflict.

The situation makes it all the more imperative for Pakistan to be on guard against sectarian conflict.

Sectarian militants are already well established in Pakistan. While Shias are attacked often, Sunnis aren’t spared either, and hostilities springing up in its neighbouring countries can spill over into Pakistan.

The nexus of sectarian warriors will continue to hurt its citizens both with and without discrimination. The attack at Karachi Airport — allegedly executed by Uzbek militants — already proved that foreign militants have established bases here, and the situation may exacerbate.

It is, therefore, paramount to eradicate the roots of militancy from tribal and settled parts of Pakistan.

An egalitarian and just State and society, and not the one where masses are divided along sectarian and tribal lines, should be the future of Pakistan.