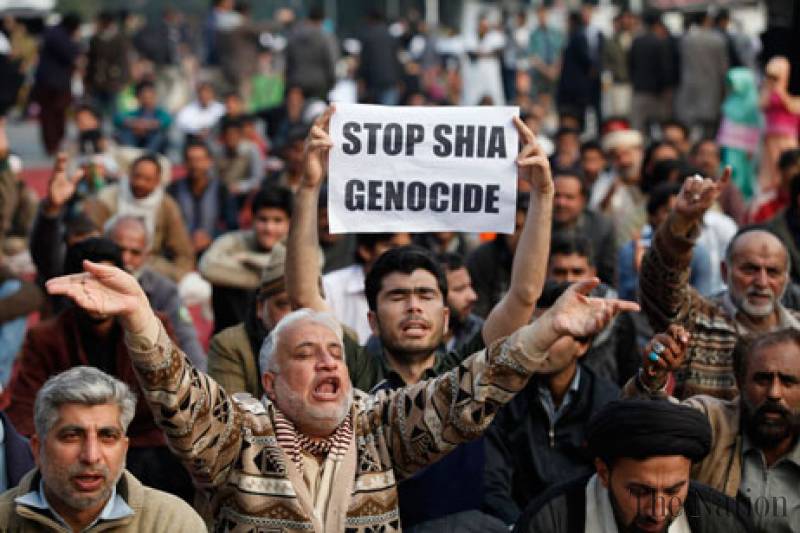 Last Friday, nearly 150 Shias were killed and 400 wounded in triple suicide blasts that targeted the Shia community during the Friday congregational prayers in Yemen’s capital Sanaa. ISIS/ISIL claimed responsibility of the attack and a statement released by them read, “Infidel Shias should know that the soldiers of the Islamic State will not rest until they eradicate them… “. The images showing aftermath of the attack are extremely graphic but in the words of an eyewitness, “The heads, legs and arms of the dead people were scattered on the floor of the mosque… Blood is running like a river.” According to reports, a fifth attack in the southern city of Sadaa was foiled when the bomb went off early, killing just the bomber.

On the same Friday, ISIS destroyed Shia shrines and mosques in northern Iraqi city of Hamdaniya. Photos released by the anti-Shia militant group show a fighter holding the ISIS flag standing on the dome of the Shia mosque that had been ransacked. Militants laying explosives in the Shia mosques can also be seen. Another photograph showed militants holding banners showing traditional Shia depiction of Imam Hussain with caption describing them as evidence of “shirk”. Later in the day, they killed 20 Shia in other parts of Iraq.

Before Friday’s sun could set, anti-Shia militants in other parts of the world had claimed 17 lives on Turkish-Syrian borders while the self-proclaimed Shia killers of the Deobandi ASWJ party in Pakistan claimed several lives in multiple incidents. They killed Shia trader Ghulam Abbas in his shop in Dera Ismail Khan in north western Pakistan, ambushed Shia social worker and philanthropist in Gujranwala’s Ramzan Pur, opened fire on Shia community leader and poet Mir Azam in Charsadda and finally, attacked Pakistan’s Bohri Shia community – again, during a congregational prayer in Karachi. A bomb planted on the main entrance of Burhani mosque of the Bohra Shia community exploded soon after the congregational prayer claiming several lives.

What do you make of it? Is this the Ummah’s way of saying Jummah Mubarak to the Shias? Sounds exaggerated? Let’s take a look at a few more Fridays.

Days before this attack, Salafi terrorists attacked Charlie Hebdo claiming they mocked Prophet Muhammad and ironically, here they killed Shias during a Milad gathering. This Imambargah was built by family of Aun Muhammad Rizvi killed in late 90s by ASWJ. His killer, along with other ASWJ workers has been on death sentence and reports suggest they have been demanding pardon through diyaat but family of the victim rejected it. This could be the reason for the attack on this very imambargah.

Friday 30th January 2015, Deobandi terrorist group Jandullah (affiliated with TTP) bombed a Shia mosque during congregational prayer killing 60 on the spot and leaving over a hundred injured. According to reports, death tool now stands around 90.  “Our target was the Shia mosque … They are our enemies,” said Jundullah spokesman Fahad Marwat. The same group had earlier claimed responsibility of killing Shia pilgrims en route to Iran as well as bombing Peshawar church killing nearly 100 Christians.

Friday 13th February 2015, anti-Shia Deobandi ASWJ terrorists affiliated with TTP attacked a Shia Imambargah in Hayatabad district of Peshawar. Three attackers with grenades, Kalashnikovs and explosive suicide vests struck at the Imamia mosque at the time of the main Friday prayers. “It is revenge for Dr Usman who was hanged last month for the attack on the army’s headquarters. We will continue our attacks on Shia infidels” the TTP spokesperson Muhammad Khorasani said.

Following the third Friday attack on Shias in Pakistan, I happened to hear a conversation between two young Shia siblings. Hassan, a 16 year old school boy had just returned from Friday congregational prayer in an imambargah in Lahore and reported that the Imam was saying they had received threats of an attack on the mosque. His 22 year old sister Sheharbano listened keenly, took a moment and suggested, “Why don’t you go pray at a Sunni mosque next time?” and both had a good laugh at it.

Not that Shias have given up their mosques, processions, traditions or culture because of these attacks but the thought holds great significance for the wider Muslim community in Pakistan. When the Shia doctors were being killed so much so that some of them had to change names to survive; when killing Shia pilgrims en route to Iran was so regular that the government had to put a temporary ban on the route; when Shia processions were bombed year after year; when Shia residential areas were attacked and when Shia were made to feel so unsafe that bombing their Friday congregational prayers was sort of given – what was the wider Muslim community doing? Did a single Muslim community leader or Imam volunteer to pray besides the Shias on Fridays? Did any one of those several dozen Muslim organisations across the country vow to join hands with the Shias on Fridays? Did you as a non-Shia Muslim think of praying with Shias one Friday in solidarity or were you too saying Jummah mubarak, you kafir!