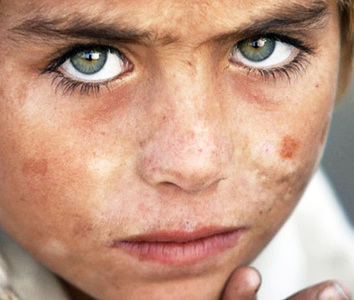 It is one of the weirdest school enrolment drives ever: Surrender a son to the madrassa (religious seminary), or pay 400,000 rupees (US$4,000) instead.

The militants in Pakistan’s tribal areas are openly coercing families to hand over their sons, or buy out their freedom.

Only a few miles from Peshawar, posters have appeared on walls in the Bara district asking parents to enlist at least one son with a seminary affiliated with Ishat-o-Tauheed, a subsidiary of Lashkar-i-Islam (LI), an outlawed militant group headed by Mangal Bagh Afridi.

The directives are clear. Only those enrolled in seminaries affiliated with LI will count.

The militants perhaps are running short on beachheads or suicide bombers. The Taliban’s rank-and-file are made up of orphans or children abandoned by parents because of abject poverty. Militancy, devastating floods, and the earthquake in October 2005 forced the poor affected households to give up their children to religious seminaries.

Some children were turned into religious mercenaries, who became fodder in the war on terrorism. As militants continue to fight against the State and amongst themselves, fresh blood is needed. Hence, the conscription.

After decades of sustained neglect and fuelled by anger against the Nato intervention in Afghanistan, Pakistan’s tribal areas have become willing breeding grounds for religiously inspired orthodoxy and militancy.

The rise of militants in Pakistan’s tribal areas is partially due to the State’s failure to extend the same privileges of citizenship that are enjoyed by others in settled parts of Pakistan.

A denial of adequate political representation, franchise, and protection under the constitution are some examples of a discounted citizenship afforded to the residents of tribal areas. Prospects for quality education, healthcare, and judicial redress have remained remote.

The recent drive for conscription by the Mangal Bagh-led LI raises several concerns and questions.

Knowing that poor households do not have access to $4,000, militants are certain to expand their ranks with young conscripts whose parents would have no other option, but to comply.

Mangal Bagh’s ascent to leadership in just a few years’ time is a remarkable story. Most accounts of Mr. Bagh’s early life suggest that he was raised by his mother after his father passed away. There are no records of education for Mr. Bagh. His last known profession was that of a cleaning assistant for a truck. He had spent time fighting against the Soviets in Afghanistan.

He took over LI from its founder and through carefully crafted alliances over the years, Mr. Bagh now commands a force whose strength is disputed between 10,000 and 100,000. He settles disputes for people and collects taxes in areas under his control. In 2008, he collected an $11,000 fine for malpractice from Dr. Shakeel Afridi, the doctor who led the CIA to Osama Bin Laden.

Mr. Bagh is schooled neither in religious text nor in humanities. His fluency with armory though enables him to recruit the young to madrassas from where they would likely graduate as militants.

While many madrassas are directly involved in militancy, most are not. Most madrassas do impart religious knowledge to students.

There are challenges even with those madrassas that do not condone violence. Their graduates are not ready to join the real world where a different set of skills and knowledge base is required.

The oversupply of madrassa graduates is imposing huge burdens on Pakistan. While some madrassas have tried to modernise their curriculum, most are stuck in the curriculum devised centuries ago to meet the religious needs of South Asian Muslims.

The madrassa-based messaging has played a huge role in radicalising the entire society. It is no longer the madrassa alumni who depict a fundamentally regressive world view. The entire society, with some exceptions, has embraced fundamentalist ideals. The goal should be to eradicate the fundamentalism that promotes militancy in Pakistan.

The State should step up and prevent the LI from conscripting in the Bara district. The government must open schools and colleges to allow the next generation of tribal area children a decent chance at a decent living.

Otherwise, the State should dispense with $4,000 per household to prevent children from being forced into militancy.

A small price to secure an entire generation against violence.