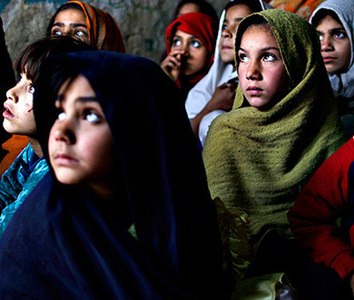 We know them as al Qaeda, Boko Haram, and the Taliban. Their branding may differ, but their misogynist ideologies do not.

These so-called Islamists have promoted discrimination against women for centuries. Now, they abduct young women and threaten to kill them. Permitting these militants to pursue their misguided agendas will destroy whatever goodwill is left for Muslims.

A recently released video by Boko Haram shows the abducted Christian girls clad in abayas. Abubakar Shekau, the leader of Boko Haram, claims that the girls, while being in captivity, have embraced Islam.

Boko Haram has taken forced conversions to another level. They have kidnapped young women, held them hostage, threatened to kill them, and offered conversion and forced marriage to Boko Haram fighters as the only way out.

Muslim societies across the globe have been notorious for the poor welfare of women, especially the girl child. In several Muslim countries, determinants of physical and social well-being are much worse for girls than they are for boys.

Despite the glaring discrimination, Muslim apologists argue that this has nothing to do with Islam or Muslims. They hastily blame the “enemies of Islam” for propagating lies about Muslims.

Scapegoating, however, will serve no purpose. Boko Haram and its ilk hurt all Muslims, but more so young women. Muslims must confront those who harm women in the name of Islam.

Boko Haram may seem like a remote African tribe that abducts girls, threatens to kill them, and marries them off against their will. Some introspection should reveal that the same tendencies are alive and instrumental in all Muslim societies.

In some Muslim societies the situation has worsened to the extent that young Muslim women have to abandon their homelands and find refuge elsewhere.

Ever wondered why Pakistan’s most recognised young woman, Malala Yousafzai, is unsafe in Pakistan, but is safe in Birmingham?

The forced migration of Malala and other young women like her sends a clear message to the young Muslim women; conform, and you can live a life of servitude; express dissent, and you are condemned to death or exile.

While the British stepped up to save Malala, millions more like her need to be rescued.

A quick look at the development statistics across Muslim societies reveals the not so hidden bias against the girl child, who is less educated and faces a much narrow set of options to develop and self-actualise.

Given the scale of discrimination against Muslim women, one may feel overwhelmed, not knowing where to begin. One may be tempted to blame the government and ask of the legislators to enact even more laws to try to safeguard the welfare of young women. While it may help, it is not where the change really needs to take place. Instead, the change has to happen at homes.

Alys Faiz, a social activist, knew what lied at the core of this issue. She grew up in England, but lived in Pakistan after marrying Faiz Ahmed Faiz, one of Urdu’s most revered poets. She asked me,

Why do Pakistanis serve the father first at the dinner table? Why are daughters served after sons, and why are mothers the last to eat in a Muslim household?

She could clearly see what the rest in Pakistan were blinded to.

Women are subjected to institutionalised discrimination at homes because of the hierarchy that favours men over women. No wonder, the girl child in Pakistan, and in other Muslim societies, struggles to be fed.

The discrimination and the neglect of the girl child in Muslim societies must not continue. Scapegoating is no longer an option, nor should it be tolerated. In the name of our daughters, we should stand up to safeguard the economic, emotional, physical, and social welfare of women.

We can start this very evening by serving women, young and old, first at the dinner table.