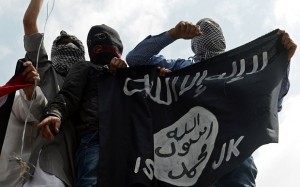 Police suspect the involvement of the nexus between the Taliban, the Lashkar-e-Jhangvi, the Jundullah and other terrorist outfits, which is already responsible for several sectarian attacks, in the bomb attack on a Bohra community mosque in Arambagh on Friday in which two worshippers were killed and 11 others injured.

Officials say that these banned outfits have also been involved in earlier attacks on the Bohra and Ismaili communities.

On March 4, a Bohra community member was killed and four others wounded in a gun attack at Burhani Snacks and Samosa Shop in Dhoraji Market in Bahadurabad.

Khan Mohammad, an employee at the restaurant, had succumbed to his injuries.

On September 18, 2012, two bomb blasts at Bohri Market in North Nazimabad had killed seven people and injured several others.

Pointing out similarities between the Arambagh mosque attack and the one in North Nazimabad, an official said the attackers had used an explosive device with a timer planted on a motorcycle in both the cases.

The official said police were trying to develop the sketches of the attackers with the help of the CCTV cameras installed near the crime scene, but two of them were not functioning at that time.

The official said the Taliban, LeJ and Jundullah nexus had been targeting Shia, Barelvi and Ahmadi communities and now added Bohras to their list.

They sent their recruits to the Afghan Taliban and the al Qaeda militant training wing so that they can learn to operate heavy arms, make bombs with mechanical devices etc.

The nexus of these groups has a vast network in Sindh and they recruit teenage boys in Karachi.

The LeJ has also been targeting policemen participating in operations against the outfit.

The official said these groups were active in many areas of the Karachi including Baldia, Saeedabad, Mochko, Manghopir, Peerabad, Sohrab Goth, Sachal and Gulshan-e-Maymar as well as the South and Central districts.

“There are reports that the LeJ is active in the Central district, Orangi Town and New Karachi. The al Qaeda Karachi chapter is working in the East district, mostly in Korangi, Shah Faisal Colony and their adjoining areas.

The officer said the forensic reports of attacks had confirmed the involvement of these groups in them.

“We have been comparing the empty bullet shells, explosives and other material used in these attacks.”

The official said the Jundullah was also become active in the city in recent times.

Then they are instructed to carry out the attack and provided arms, explosives, motorcycles and other equipment they require for this purpose.