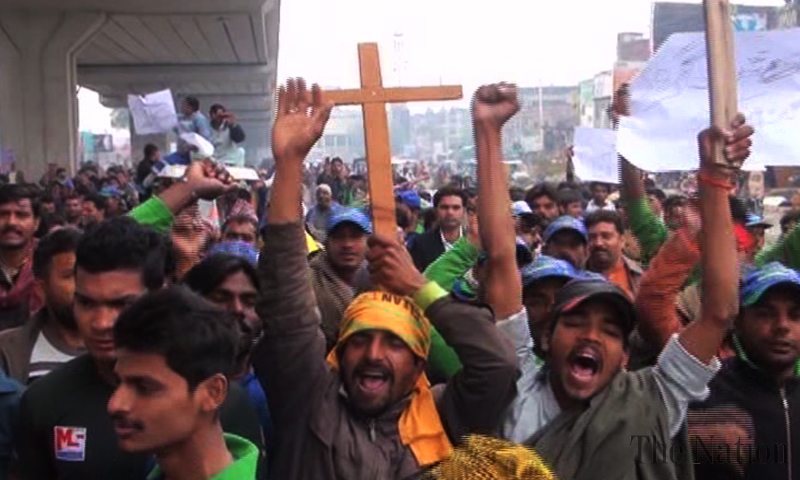 Yesterday was an unusual day on Pakistani television channels as well as on social media. Clerics who are always short of words to condemn violence, and never speak of sanctity of human life, were seen demanding justice and denouncing violence. Maulana Tahir Ashrafi in one of the TV shows claimed that the current situation is taking Pakistan towards a civil war. Ironically, the assault of Taliban and ASWJ on Pakistan for over a decade, killing 70,000 of us was never highlighted as a war on us.

Mufti Naeemi of Jamia Bonoria Deoband released a special video message demanding prosecution of the culprits. Proud advocates of blasphemy law were seen acting like human right champions on social media, while those who leave no opportunity to demand death for apostasy had also become advocates for humanity.

Have we finally landed in the Naya Pakistan we all dreamed of? Well, not really. The reason behind this apparent compassion, denouncement of violence and advocacy for rights is the fact that the subject was a Chrsitian mob. Put the question of Shahbaz Bhatti being gunned down in the wake of blasphemy laws controversy, and all compassion will melt away in seconds.

For decades, many have justified the suicide bombings of Taliban and ASWJ on the pretext that these people have lost their family members in drone attacks and the bombings are a reaction only. However, one can bomb a church full of Christians on a Sunday and expect no reaction whatsoever. After all, only Muslims have the monopoly over emotionalism and mob mentality in the country.

Pakistanis do not take a moment to suggest that “terrorism has no religion” every time a Muslim terrorist strikes in the country, but we have considered it our moral responsibility on social media to remind the world of “Christian minority going violent.”

Similarly, some of the human rights champions seem to have ignored the attack on the Lahore church and are spending more time addressing the mob’s reaction. Apparently, no one is trying to look deep into the problem and demand answers from the Punjab government as well as the Pakistani state. When people are taking law in their hands, the state needs to come up with answers.

Christians in Pakistan for years have been discriminated, mocked with racist jokes, oppressed and persecuted. They have been reduced to odd jobs which none else wants to do – cleaning your gutters and child-minding your kids while you enjoy fine Australian beak steaks at five stars.

Their entire villages have been burnt time and again; they have been named under false blasphemy cases; their houses have been torched across the country; their property has been looted; their churches have been bombed and nothing has been done to counter any of this.

In 2013, over a 100 Christian houses were set alight by terrorists of ASWJ in Joseph Colony Lahore while 75 were killed later in the same year in a suicidal attack by the same group of Deobandi terrorists on a Peshawar church. In 2012, the subject of anger after the “Innocence of Muslims” YouTube video, were Christians of Mardan, where a church, school, library, laboratory and houses of clergymen were set alight. In 2011, Deobandi ulema demanded a ban on The Bible while later in the same year countless Christians were killed in Gujranwala by enraged mob in the presence of the police. The Gojra riots of 2009 leave behind chilling remnants where a Muslim mob attacked Christian houses after being incited by a local mosque and the police typically refused to provide protection.

In the year 2008, a church in Karachi was attacked with the Christians being denounced as infidels. The Christian community also suffered the wrath of angry Muslims following the publication of infamous Danish cartoons in the year 2006. The list of Christians being implicated in false blasphemy charges to settle personal or political scores is endless – the recent story of Shama and Shahzad being only one of those cases.

The crimes against the community are escalating. Their killers roam free and vow to do more of the same. They are abused and threatened in broad daylight by the likes of Hafiz Saeed and Ludhianvi under state patronage. Under these circumstances, when terrorists come to wipe off two churches, some give their lives to defend others and still 20 die, how can we expect them to remain sane?

When a state fails time and again and becomes a party to your oppression you have to take matters in your hands. Survival is basic human instinct. Vigilante justice is not right but it highlights the failure of the state, not of people. They are part of the same society like all of us and have had enough. If the state fails to deliver justice and is party to crimes against a community, the vigilante mob response should not be surprising. After all, that is how a state and its relationship with people is supposed to work. The state delivers justice, provides protection, ensures equality of all and in return gets taxes, compliance to a set of laws and order in the land. It is a give and take situation. If the state does not do its job, the rule of jungle will prevail.

It is time for the media, the selective human rights champions and the state cronies to look deep and hit the nail on the head. The Christians of Lahore and Shias of Rawalpindi have suffered long enough and are barely managing to survive.