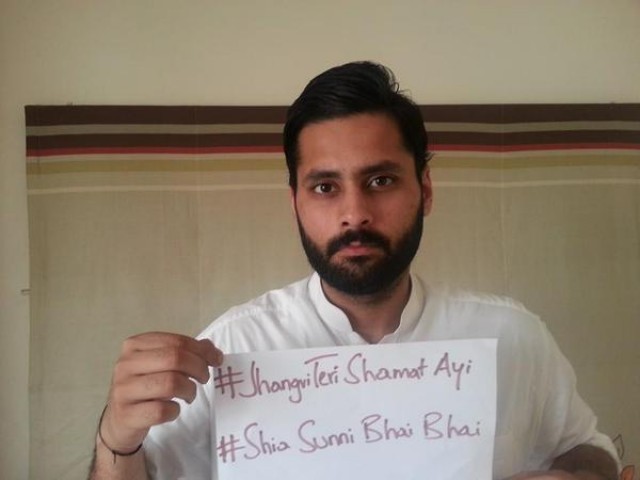 I am writing this to bring your urgent attention to an illegal public gathering of Ahle Sunnat Wal Jamaat (ASWJ), which was declared as a banned outfit on February 15, 2013, by the Government of Pakistan.

The gathering is being held on February 21, 2015, after Maghrib Prayers, at Karachi Company Market, G-9 Sector, Islamabad, which falls within your jurisdiction. In fact it is just seven minutes away from the Islamabad Capital Territory Administration Office.

The gathering is being held to mark the death anniversary of the founder of Sipah-e-Sahaba (SSP), Haq Nawaz Jhangvi, who is also the inspiration behind the formation of Lashkar-e-Jhangvi (LeJ). Both SSP and LeJ were banned by the Government of Pakistan on January 14, 2002, and August 14, 2001, respectively.

I have separately informed the concerned Assistant Deputy Commissioner Captain Sher of this event via telephone. Another colleague of mine personally went in to submit an application asking your office to prevent this illegal gathering but your office refused to accept the application and an official replied that it is not in their capacity to prevent the said banned outfit from staging this illegal event.

Following this, another friend managed to submit the application after much insistence – which was unnecessary given that our demands were in compliance with the law of Pakistan. However, your office again expressed their inability to act.

As a responsible officer of the state, you have been designated with the duty to ensure safety and good administration of Islamabad, the capital city of Pakistan, which is home to the parliament, the Supreme Court and the prime minister’s secretariat. This is the city from where the writ of the government is defined, enforced and protected – or at least that is the notion I carry as a citizen of this country.

I am sure that as a responsible officer of the state, you are also aware that Haq Nawaz Jhangvi is the ideological father of Takfirism, sectarian violence and hate in Pakistan. Members of the SSP, LeJ and ASWJ have been involved in various cases of sectarian killings. Rogue clerics associated with these outfits pass perverse verdicts on the Shia school of thought declaring them as infidels and condemning them to death.

Aurangzeb Farooqi, the head of ASWJ in Karachi, in a recent interview which he gave at the Karachi Company Market – venue for today’s illegal gathering – stated that ASWJ supports the movement for Shia Pakistanis to be declared non-Muslims and a minority under the Constitution of Pakistan. Today’s event is to spread and advocate this same message.

The SHO of the Secretariat Thana in Islamabad registered an FIR against ASWJ as recent as February 20, 2015, booking them for not only violating the Amplifier Act but also interrupting government functions and spreading religious hatred. However, the central leader of ASWJ, Ahmed Ludhianvi, who was nominated in the FIR, was never arrested.

As a citizen of Pakistan, it was highly embarrassing to see a banned militant outfit hold the building of the Supreme Court of Pakistan hostage for several hours and a senior government official being sent to negotiate terms with them. For me, it was as if I was observing the funeral of the writ of the state. A state where anti-terrorism protestors are arrested because they are unarmed, upright and law-abiding citizens but militants and killers roam around under police protocol and state patronage.

The news about the interior ministry reaching a secret deal to prevent arrest of another accused, Abdul Aziz, who illegally uses the premises of a government mosque, Lal Masjid, to patronise the Taliban, forced me to ponder over this affair but, so far, I have been unable to find the right words to express my disgust at the impotency of the government.

Our politicians, who pollute the honourable offices of the various ministries, are perhaps staying quiet to serve their own means, as majority of Pakistan’s political parties are reported to have taken help of banned militant outfits during the recent general elections. Ludhianvi himself claimed that Pakistan Muslim League-Nawaz and Pakistan Peoples Party took ASWJ’s support in an interview in 2013.

However, with the faith that our bureaucrats, whose jobs are not dependent on re-elections and are appointed on merit, would stand up to protect and uphold the rule of law, I appeal to you to ensure that action is taken against ASWJ under the relevant laws.

Failing to do the same, the citizens will continue to do their job – that is risking their lives, standing unarmed and raising their voices against these militant and terrorist organisations. The government may be willing to negotiate with our killers but I would rather sacrifice my life than submit to the terror of these thugs and goons who disgrace Pakistan and Islam.

Like you, we as citizens are also bound by the Constitution of Pakistan and we cannot see it being reduced to a joke nor can we live with the blood of our innocent Shia brothers on our conscience. Today, when Pakistan is in a state of war which is not just being fought in the tribal areas but has also been brought to our streets and homes, staying silent is a crime and the citizens refuse to remain silent.

A Common Citizen of Pakistan