Home  »  Newspaper Articles   »   Does anyone care that Shia are being relentlessly murdered in Pakistan? 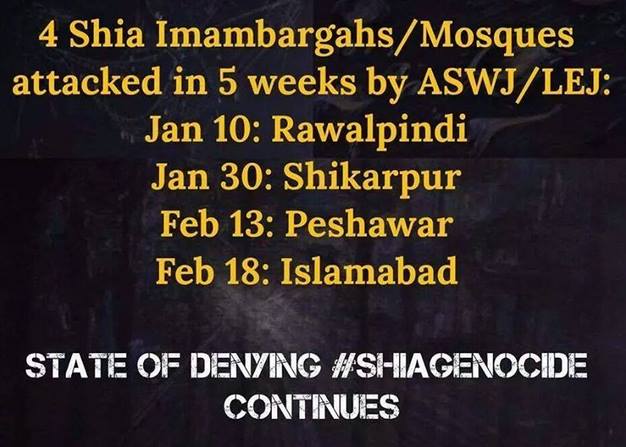 The recent murders of Shia community members in Pakistan has not drawn out the shock and horror that other recent atrocities such as Charlie Hebdo developed. Granted that the attack on satirists was within the bounds of Europe, though the sheer brutality and scale of killings in Pakistan has not even created half an hour of outpouring of sorrow and pain on social media. For the Shia that have been killed, there are no #JeSuisCharlie hashtags nor has there been any significant outcry by politicians in Europe.

So let us review the targeting of Shia that has taken place by the Pakistan Taleban and extremist groups in the country. Take for example the targeting in Balochistan of Shia Hazara Muslims with several thousand killed since 2008, including two bombings in Quetta in January and February 2013 that killed over 180 people. Or take the blast at the Shia mosque in Shikarpur earlier this year that killed over 40 Shia worshippers who were praying at the mosque. The Sindh province has been targeted by the extremist Jundallah group that has pledged allegiance to the Tehreek-e-Taliban Pakistan (TTP) and to the Islamic State.

According to the Human Rights Commission of Pakistan, over 700 Shia were killed in 2013 alone. More than 1,000 were injured in over 200 sectarian terrorist attacks in Pakistan. The scale of the targeting of this minority community is just breath-taking with attacks taking place in Quetta, Karachi, Parachinar, Islamabad and Rawalpindi. Which begs the question as to who is resourcing these attacks which are meant to create fear within Shia communities and to displace them away from their villages, towns and cities. In effect, a murderous displacement strategy is being played out in Pakistan with little or no hue and cry from Western nations.

The latest massacre against the Shia in Pakistan took place on 13 February. The Pakistani Taleban targeted a Shia mosque in Peshawar leading to the death of 20 people. The attackers used guns and grenades and a gunfight broke out outside the mosque. One of the attackers set off his explosive vest when cornered demonstrating that the killers were on a suicide mission.

The global silence on the targeting of the Shia in Pakistan is sickening. No hashtags have been circulated, no graphics calling for peace, nor have any faith leaders come together and carried out an interfaith walk which seems to be the ‘thing to do’ when a major atrocity occurs. Young people have not railed against the injustice and all that has happened is that more innocent worshippers have been murdered on the spot where they sat contemplating God.

Furthermore, not a single mosque or church has spoken out about the targeting of the Shia and only a handful of courageous civil society groups in Pakistan and Sufi groups have done so. The impression that this will give to the Shia communities in Pakistan and globally is that their lives do not matter, that they are just forgotten as numbers on the pages of newspapers. Yet, the Shia of Pakistan are one of the most vulnerable groups in the country and given their numbers and given the ideology of the Pakistan Taleban who regard them as heretics, and thereby ‘fair game’ for deadly attacks, you would think that the human rights of the Shia would be one conversation leaders of countries who pride themselves on human rights may want to raise. Sadly, no such thing apart from a long and deafening silence.

So next time you hear a political leader speak about human rights, why don’t you ask him where his voice was when Shia were being murdered in Pakistan? The Shia of Pakistan are an asset to Pakistan which should be protected at all costs. As politicians have rightly mentioned, if Jews left Europe, Europe would not be Europe any more. Well, if the Shia of Pakistan left Pakistan, Pakistan would not be Pakistan any more.