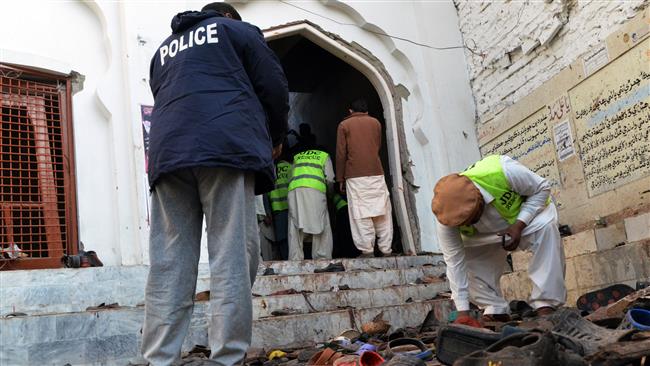 ISLAMABAD: Investigations by the security agencies have confirmed that the February 13 fidayeen attack targeting a Shia mosque in Peshawar during Friday prayers [which killed 20 people] was masterminded by Mullah Fazlullah’s close aide and the ameer of the TTP’s Military Shura, Commander Umar Mansoor Khalifa, who had earlier plotted the dastardly Army Public School carnage on December 16, 2014.

Well-informed sources in the security establishment say there is sufficient evidence to believe that the Hayatabad Mosque butchery was masterminded by Commander Umar Mansoor, who not only heads TTP’s Darra Adam Khel chapter but also Tariq Geedar group, and continues to operate from across the border in Afghanistan. The attack on the Shia mosque during Friday prayers was just like an action replay of the Peshawar school assault as far as the modus operandi of the TTP fidayeen squad was concerned. Just like the school attackers, the assailants who targeted the mosque were dressed in FC uniforms, which first set ablaze their car, then scaled the wall after cutting the razor wire, before hurling hand grenades at the worshippers and spraying them with bullets. In a video clip emailed to several media persons, Umar Mansoor claimed responsibility for the assault, saying it was revenge for the execution of Aqeel alias Dr Usman, the GHQ attacker, who was executed in December 2014.

While warning of more severe attacks in the future, Commander Umar Mansoor said, “This is a series that will continue to draw blood for blood”. In a separate email which carried a photograph of the suicide assault team, Umar is shown sitting in a row with three fidayeen attackers namely Siddiq, Aftab and Shahid. The TTP had issued a similar photograph following the Peshawar Army School bloodbath wherein Umar Mansoor was shown standing in the middle with six fidayeen attackers. It clearly established that he had motivated and sent these men on the suicide mission to attack the Army School. Umar Mansoor had later released an audio message to the media in which he tried to justify the school attack.

Investigations into the Army school massacre revealed that the fidayeen attackers were communicating with Umar Mansoor across the border in Afghanistan while they were carrying out the butchery. Mullah Fazlullah had tasked Khalifa Umar Mansoor Darra alias Umar Khalifa Adenzai who was given additional charge of leading the Peshawar chapter of the TTP besides heading Darra Adam Khel chapter after Mufti Ahsan Swati decided to join hands with the Islamic State or Daesh along with Shahidullah Shahid and five others. The 36-year old father of three children, Umar Mansoor had threatened in a December 20 more ‘revenge attacks’, if the military and the intelligence agencies do not stop operations against the militants. In a one-minute-forty-nine-seconds video with English subtitles posted on the TTP website, Umar had said that the attack on the Army Public School was in retaliation to the army’s ongoing operation in North Waziristan.

Director General ISPR Major General Asim Saleem Bajwa had stated during a February 12 press briefing a day before the Peshawar Mosque attack that the security forces have made arrests in connection with the December 16, 2014 Peshawar school attack and all those involved, except six, had either been killed or captured. “The main planners and facilitators who are still at large included Mullah Fazlullah, Umar Mansoor, Asif Ali, Taj Mohammad and Qari Saifullah. The six already arrested in Pakistan are Atiqur Rehman (a sub-operation commander), a government-employed cleric at a mosque Abdul Salam (facilitator), Kifayat (facilitator), Hazrat Ali (financier who also carried a head money of Rs2.5 million), Sabeel Yahya Afridi (involved in transporting the fidayeen attackers) and Mujibur Rehman (host of the attackers)”, said the DG ISPR while adding that the army authorities are sure that Mullah Fazlullah and Umar Mansoor are operating from Afghanistan and we are making frantic efforts to ensure that they are either killed there or arrested and extradited to Pakistan.

Umar’s younger brother Mustafa alias Munoon and four of his accomplices were killed in a joint operation by the law-enforcement and intelligence agencies in the Frontier Region Peshawar in the aftermath of the attack on the Army Public School and College. Coming from the Adenzai sub division of the Lower Dir district in Khyber Pakhtunkhwa, Umar Mansoor was affiliated with Tariq Geedar group of the TTP which still operates from Darra Adam Khel in Khyber Pakhtunkhwa. The Geedar group had earlier been found involved in the June 25, 2014 firing on a PIA flight in Peshawar [that killed a female passenger] and the March 17, 2013 fidayeen attack targeting Peshawar district courts on March 17, 2013 which had killed four people. The real name of Umar Mansoor is Aurangzeb who has been using three different names Umar Naray, Umar Adezai and Khalifa Umar Mansoor. Obviously, he prefers the last name as it confers on him some respectability in the ranks of the militants and makes him important in the hierarchy of the Pakistani Taliban.