Home  »  Newspaper Articles   »   This is NOT sectarian violence, it is Shia genocide – Sibtain Naqvi 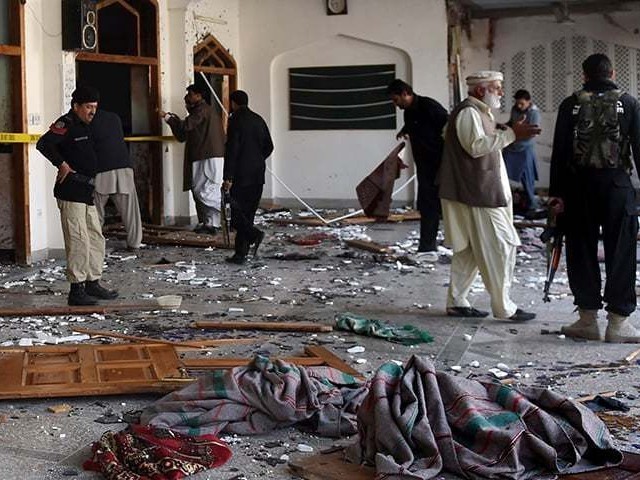 Another imambargah attacked in Islamabad leaving several Shias dead and injured. In the last two weeks, this is the third such incident, fourth overall in 2015 and it is only February. This is only the latest attack in a long line of attacks that have taken place. From 2001 to now, thousands of Shias have been killed in terrorist attacks across Pakistan. Through it all, governments continued to tolerate extremist groups and even gave them space in mainstream politics.

The pace of these frightening attacks has picked up. One would have thought that the regular attacks would have pricked social conscience into recognising the on-going Shia genocide, but sadly, nothing of this sort has happened. The airwaves and social media are dominated by the cricket World Cup and any dialogue is swept aside in the face of larger concerns of bat and all.

When Shias are killed, we want to label them as Pakistanis or Muslims. They are both but are not being targeted because of their nationality or religion. This is a deliberate massacre of a particular community being carried out with impunity. The right term is not ‘sectarian violence’ which implies that it is a war between two sects. If this was a war, then there would be Shia suicide bombers or killers attacking other sects. The right term is ‘genocide’ which is defined as,

“The deliberate killing of a large group of people, especially those of a particular nation or ethnic group.”

The deliberate obfuscation of “sectarian violence” takes away focus from the issue. Equally damaging are theories of Iran-Saudi Arabia proxy wars and geopolitical manoeuvres. Why is there so much resistance to recognising this simple fact? Abbas Town and Alamdar Road were bombed because Shias lived there. Hazara Shias were pulled from buses and shot because they were Shia. Muharram processions and imambargahs are attacked because they are seen as Shia institutions.

If its Shia-Sunni violence, how many Shia suicide bombers can you name? How many Sunnis have been killed by Shias after checking their ID cards? How many times has a Tablighi Ijtima been bombed? How many Sunni mass graves have been dug following Shia attacks on Tarawih?

The answer is zero to all of them.

Shame on all deniers of ‪‎Shia genocide and those who try to dilute it with false narratives.

After every attack there is token condemnation by government agencies which continues to give political space to known Shia killers. It also actively supports killers because they are seen as “strategic assets” that will be used for asymmetric wars against imagined enemies of state. Uninformed and irrelevant human right groups give unsolicited and ineffectual advice, some even condemning the military operation against the self-declared enemies of state. It seems all the human rights are for people bent on destruction of a community, one that has served Pakistan in every field of life.

Solutions are complex but for a start we need to accept these killings as what they are – a Shia genocide. We need to call the killers by name and identity, and accept that these are one-sided massacres. The public, the state, the media and the civil society as a whole needs to disassociate itself from people who sympathise with or support these Takfiri/Deobandi terrorists and stand for a pluralistic, secular state, the kind envisioned by the founding fathers. We need to conduct a thorough self-analysis on where we stand when it comes to issues of religious tolerance; and build pressure on the government and the state to break all ties with Islamist non-state actors. Only then can any condemnation be considered meaningful and sincere. We need to agree that every person who tries to rationalise and justify Shia genocide as sectarian proxy war between Iran and Saudi Arabia is an indirect accomplice of these butchers.

The recent India-Pakistan cricket match had the whole nation focused on it. According to NDTV, 1.1 million people in Pakistan had 3.3 million interactions related to cricket. But how many people make their profile pictures black and express dismay over Shia killings? A cricket match was given unprecedented coverage while existential crises were being ignored.

Several thousand Americans came out in solidarity with Muslims after‪ the Chapel Hill shootings. How many Pakistanis will come out in sympathy with Shias? How many have been gathered by protests taking place for solidarity with Shia victims? How many will stand up for them? There are more people at a low-key match screening than there are people standing up for their Shia community. That’s enough to put our overblown sense of humanity to shame. If the people of this land cared about innocent countrymen being killed in the name of faith half as much as they care about cricket, they would have a better country and maybe a better cricket team too.