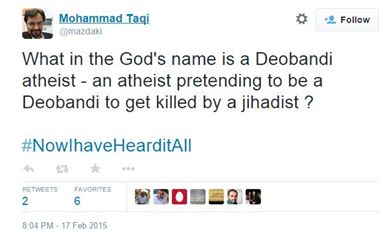 Here’s an example of typical strawmanning, although I did not expect this tactic from Dr. Mohammad Taqi who happens to be a dear friend. To see him align with the likes of Shahid Saeed, known Deobandi apologist and a worshipper of Iftikhar Chaudhry, makes one ponder the financial power and reality of the Saudi establishment proxy in Pakistan in the form of the PMLN regime.

The term Deobandi atheist or Deobandi pseudo atheist is a term that is applied, not adopted. This is the starting point of Dr. Taqi’s blatant misrepresentation. This term applies to those who use the guise of atheism to subtly engage in Takfir against Sunnis and Shias while deliberately omitting the role of Deobandi polemicists and hate mongers. It is a term reserved for those who do not abandon their vicious anti-Shia and anti-Sunni-Sufi sectarianism rooted in Deobandi hate literature but at the same time proclaim their hollow “liberal”. secular and “atheist” connections. LUBP’s tag on Deobandi atheists and secular sectarians provides ample example of those pseudo-atheists and secular sectarians who resort to false Saudi-Iran or Sunni-Shia binaries and generically condemn all forms of religions and sects only to hide, dilute or obfuscate the fact that it is the Deobandi terrorists and clerics who have been killing and inciting to violence against Shias, Sunni Sufis, not the other way round. Both of these groups work in close coordination. Deobandi hate clerics and suicide bombers kill Shias, Sunni Sufis, Barelvis, Ahmadis, Christians, Hindus etc while Deobandi pseudo atheists step forward to condemn all religions and sects, blame both Sunni and Shia, Saudi and Iran, thus effectively defelcting attention from common Deobandi identity of ASWJ, TTP, LeJ and other terrorist outfits who are killing both Sunni and Shia.

Starting with Tariq Ali and including members of Pakistan’s elitist left-liberal strands, this is valid term of reference. Dr. Taqi’s intellectual dishonesty stems from the very way he frames this issue. You can refer to my timeline on twitter and see how I have responded to this. Clearly, since they lack an argument, they are now responding with the most tired attacks. I did not see it fit to respond to those claiming that LUBP destroyed PPP! This assertion is so ridiculous that it works in our favour. 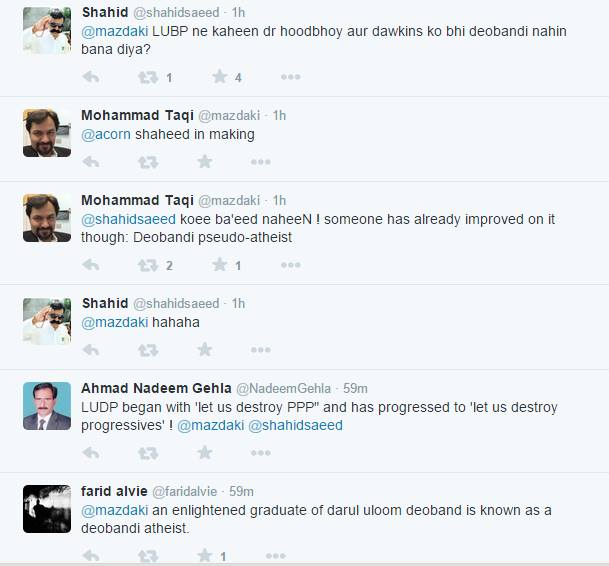