Home  »  Newspaper Articles   »   #‎DeobandiTerrorism‬: Under Pakistani state patronage it was Deobandi Islam, another toxic form of the faith already indigenous to South Asia, that has flourished far more than Wahhabism. 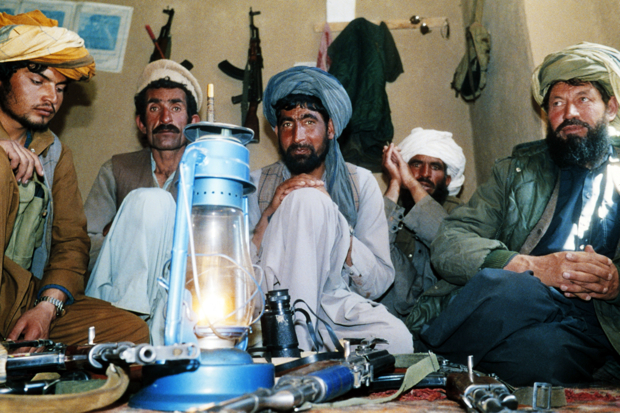 We all need stories ‘to help us make sense of the complexity of reality’, intones the sensible sounding voice of Adam Curtis at the start of his new documentary about Afghanistan, Bitter Lake.

But stories told by ‘those in power’ are ‘increasingly unconvincing and hollow’. What a relief then that Curtis has raided the archives of BBC News on our behalf for footage of the west’s 13 year engagement in Afghanistan to construct his own more than two hour long story.

His conclusion: the crisis in Afghanistan is all the fault of the witless Americans!

The problem all began on a US warship parked in the Suez Canal in 1945 (cue newsreel). It was there that President Franklin D. Roosevelt met with King Abdul Aziz of Saudi Arabia and agreed to buy all of his oil. But the wicked Saudis used their oil wealth to export their ‘radical, violent and extremely puritanical’ form of Islam – Wahhabism – around the world, including to Afghanistan.

Curtis’s story, as simplistic as anything told by ‘those in power’, is made to seem frightfully clever by his acid-trip filmmaking style, perfectly spoofed by Ben Woodham (watch below) as the ‘televisual equivalent of a drunken late night Wikipedia binge with pretension for narrative coherence’.

In his search for ‘the complexity of reality’ Curtis bangs on endlessly about the Saudis.

But in the TV equivalent of staging Hamlet without the prince, he barely mentions Pakistan, the single most important driver of the decades’ old conflict.

Anyone looking for an explanation of Pakistan’s desperate quest to dominate Afghanistan through Islamist proxies should not turn to Bitter Lake for enlightenment (hint for Curtis: Kabul claims vast swathes of Pakistan’s Pashtun territory and is a bit too thick with India for Islamabad’s liking).

Some jaunty archive images of Afghanistan attempting to block the new Muslim homeland’s membership of the UN in 1947 would not have gone amiss. Perhaps Curtis could also have ferreted out some footage of the young Afghan Islamists whose first taste of jihad came in the mid-1970s in a secret Pakistani training camp, without an Arab sheikh in sight.

Saudi Arabia did go halves with the CIA in funding the Afghan jihad in the 1980s but it was Pakistan’s military spy agency, the ISI, that set the strategy and maintained tight control over how the money was distributed. The craziest Afghan Islamists got the most cash as Pakistan’s generals believed they would be too preoccupied spreading militant Islam to be bothered trying to redraw national borders.

Under Pakistani state patronage it was Deobandi Islam, another toxic form of the faith already indigenous to South Asia, that has flourished far more than Wahhabism.

Nor is there any mention of the vast amounts of Pakistani cash, materiel and military advice that underpinned the Taliban’s astonishing blitzkrieg conquest of Afghanistan in the 1990s. And nothing at all on how Pakistan, furious at having lost its client state, continued to support the Taliban throughout the 9/11 decade.

Curtis throws in other stories to pad out his straight to iPlayer film. The most clunking is that the western intervention in Afghanistan has been an unmitigated disaster.

It’s all there: Afghans complaining about corruption, a blundering British Army making more friends than enemies in Helmand (like most Brits, Curtis is myopically obsessed with just one of Afghanistan’s 34 provinces) and ‘Jack’ Idema, a freelancing American who apparently tortured Afghans in his Kabul basement as part of his one-man quest to find Osama bin Laden.

But the west’s supposed failure is now the most potent of all stories about Afghanistan. To hear all this again is merely to wallow in a peculiarly western form of self-hatred, built on the historical nonsense that Afghanistan always defeats its foreign invaders.

Curtis makes much of the irony of British troops returning to Maiwand, the scene of a great defeat for their 19th century forebears. Well, yes, colonial Britain did suffer some epic military defeats in Afghanistan, but it bounced back to win both of its 19th century Afghan wars. Even the Russians arguably achieved their strategic aim of propping up the Afghan communists, who out-lived the Soviet Union itself.

Anyone really interested in the complexity behind the ‘lost war’ story might remind themselves that the US and its allies easily secured their basic military aims in 2001, swiftly destroying al-Qaida’s operational base in Afghanistan and ousting their Taliban landlords.

Nor have the west’s subsidiary ‘nation building’ efforts been completely disastrous. Curtis has much to choose from on this front: the reconstruction of a national infrastructure destroyed by civil war, the revival of vast tracts of farmland by landmine clearing charities, the giant leaps in health and education.

Or how about just one interview with any of the 5.7m refugees who have returned to the country since 2001? Dwell on that a moment. Nearly 20 per cent of Afghans have escaped the indignity of wasted lives in refugee camps because of a supposedly failed war. They are still coming back, by the way, despite all those psychotic Americans: 39,665 in 2013, the last year for which UNHCR have published statistics.

But it’s pretty clear Curtis is as uninterested in such ‘complexity’ as he is in Afghans, a people he really doesn’t seem to like very much. His most insidious story is that they are irredeemable savages who will always reject, steal or subvert the help of the most well-meaning of outsiders.

Naïve westerners are mocked, from the army of US engineers who built the Kajaki dam in Helmand in the 1950s, to Rory Stewart’s Turquoise Mountain Foundation in Kabul, seen introducing Afghan students to western conceptual art.

‘That is Sir Sidney Ruff-Diamond, the British governor whose benevolent rule and wise guidance we could well do without,’ says Kenneth Williams’ Khasi of Kalabar in a clip from Carry On Up the Khyber that sums up Curtis’ view.

In fact Afghans have consistently demonstrated their wish to join the 21st century. After more than a decade of trying the Taliban have failed to gain more than a slither of popular support. Democracy in Afghanistan is flawed, but with Afghans continuing to go the polls, it has not failed, as Curtis baldly states.

As Lotfullah Najafizada, one of the country’s leading journalists, put it last year, a sneering western media might have written off Afghanistan’s ‘decade of war’. But, ‘for us, it’s a decade of peace’.