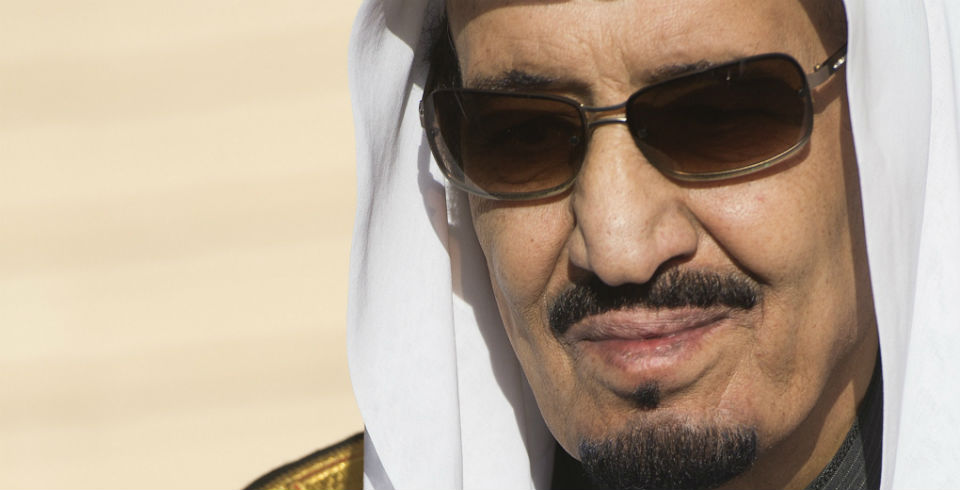 President Barack Obama arrived in Riyadh today to offer his condolences on the death of the beloved Saudi King Abdullah and to meet his successor, Salman bin Abdulaziz Al Saud. But just who is King Salman?

The U.S. ambassador in Riyadh, Joseph Westphal, hailed the new Saudi ruler on Friday, proclaiming that ties “will only be strengthened by the wisdom and courage that is the essence of King Salman.” This was not just standard boilerplate from serving U.S. officials: Former U.S. envoy to Saudi Arabia Robert Jordan described Salman as “a reformer … well prepared for the task at hand,” and the Washington Post is reporting that analysts consider Salman “a moderate in the mold of Abdullah,” the late king.

Yet Salman has an ongoing track record of patronizing hateful extremists that is now getting downplayed for political convenience. As former CIA official Bruce Riedel astutely pointed out, Salman was the regime’s lead fundraiser for mujahideen, or Islamic holy warriors, in Afghanistan in the 1980s, as well as for Bosnian Muslims during the Balkan struggles of the 1990s.

As longtime governor of Riyadh, Salman was often charged with maintaining order and consensus among members of his family. Salman’s half brother King Khalid (who ruled from 1975 to 1982) therefore looked to him early on in the Afghan conflict to use these family contacts for international objectives, appointing Salman to run the fundraising committee that gathered support from the royal family and other Saudis to support the mujahideen against the Soviets.

Riedel writes that in this capacity, Salman “work[ed] very closely with the kingdom’s Wahhabi clerical establishment.” Another CIA officer who was stationed in Pakistan in the late 1980s estimates that private Saudi donations during that period reached between $20 million and $25 million every month. And as Rachel Bronson details in her book, Thicker Than Oil: America’s Uneasy Partnership With Saudi Arabia, Salman also helped recruit fighters for Abdul Rasul Sayyaf, an Afghan Salafist fighter who served as a mentor to both Osama bin Laden and 9/11 mastermind Khalid Sheikh Mohammed.

Reprising this role in Bosnia, Salman was appointed by his full brother and close political ally King Fahd to direct the Saudi High Commission for Relief of Bosnia and Herzegovina (SHC) upon its founding in 1992. Through the SHC, Salman gathered donations from the royal family for Balkan relief, supervising the commission until its until its recent closure in 2011. By 2001, the organization had collected around $600 million — nominally for relief and religious purposes, but money that allegedly also went to facilitating arms shipments, despite a U.N. arms embargo on Bosnia and other Yugoslav successor states from 1991 to 1996.

And what kind of supervision did Salman exercise over this international commission? In 2001, NATO forces raided the SHC’s Sarajevo offices, discovering a treasure trove of terrorist materials: before-and-after photographs of al Qaeda attacks, instructions on how to fake U.S. State Department badges, and maps marked to highlight government buildings across Washington.

The Sarajevo raid was not the first piece of evidence that the SHC’s work went far beyond humanitarian aid. Between 1992 and 1995, European officials tracked roughly $120 million in donations from Salman’s personal bank accounts and from the SHC to a Vienna-based Bosnian aid organization named the Third World Relief Agency (TWRA). Although the organization claimed to be focused on providing humanitarian relief, Western intelligence agencies estimated that the TWRA actually spent a majority of its funds arming fighters aligned with the Bosnian government.

A defector from al Qaeda called to testify before the United Nations, and who gave a deposition for lawyers representing the families of 9/11 victims, alleged that both Salman’s SHC and the TWRA provided essential support to al Qaeda in Bosnia, including to his 107-man combat unit. In a deposition related to the 9/11 case, he stated that the SHC “participated extensively in supporting al Qaida operations in Bosnia” and that the TWRA “financed, and otherwise supported” the terrorist group’s fighters.

The SHC’s connection to terrorist groups has long been scrutinized by U.S. intelligence officials as well. The U.S. government’s Joint Task Force Guantanamo once included the Saudi High Commission on its list of suspected “terrorist and terrorist support entities.” The Defense Intelligence Agency also once accused the Saudi High Commission of shipping both aid and weapons to Mohamed Farrah Aidid, the al Qaeda-linked Somali warlord depicted as a villain in the movie Black Hawk Down. Somalia was subject to a United Nations arms embargo starting in January 1992.

Saudi Arabia’s support for Islamist fighters in Afghanistan and the Balkans ultimately backfired when veterans of the jihad returned home, forming the backbone of a resurgent al Qaeda threat to Saudi Arabia in 2003. Salman fell back on a tried-and-true Islamist trope to explain the attacks targeting the kingdom, declaring that they were “supported by extreme Zionism whose aim is to limit the Islamic call.”

The jihadi threat to Saudi Arabia, however, does not appear to have ended Salman’s willingness to associate with alleged jihadi funders and fundamentalist clerics.

The jihadi threat to Saudi Arabia, however, does not appear to have ended Salman’s willingness to associate with alleged jihadi funders and fundamentalist clerics. The board of trustees for the Prince Salman Youth Center, which Salman himself chairs, today includes Saleh Abdullah Kamel, a Saudi billionaire whose name showed up on a purported list of al Qaeda’s earliest supporters known as the “golden chain.” (The Wall Street Journal reported that Kamel “denies supporting terror.”) But as the United States sought to shut down Saudi charities with ties to terrorism in the aftermath of the 9/11 attacks, Kamel and Salman both condemned the effort as an anti-Islamic witch hunt.

In November 2002, Prince Salman patronized a fundraising gala for three Saudi charities under investigation by Washington: the International Islamic Relief Organization, al-Haramain Foundation, and the World Assembly of Muslim Youth. Since 9/11, all three organizations have had branches shuttered or sanctioned over allegations of financially supporting terrorism. That same month, Salman cited his experience on the boards of charitable societies, asserting that “it is not the responsibility of the kingdom” if others exploit Saudi donations for terrorism.

As President Obama encourages Saudi Arabia to build “a society that is going to be able to sustain itself in this age,” he would do well to consider Salman’s role helping to run the Abdulaziz bin Baz Foundation, named after a Saudi grand mufti who passed away in 1999. The foundation’s website states that it has been “blessed with direct and continuous support” from Salman since its creation in 2001.

In part thanks to this foundation, the late bin Baz still ranks among the most influential Saudi clerics on the web, even from beyond the grave. Islamic historian Reuven Paz notes that the cleric was renowned for his “persistent attempts to move Saudi Arabia in the direction of strict and severe fundamentalism.” For example, bin Baz memorably ruled that women who study with men are equivalent to prostitutes.

Aqeel al-Aqil, a Saudi national placed under U.S. sanctions in 2004 for leading an organization alleged to have aided al Qaeda in more than 13 countries, was one member of the Baz Foundation’s board under Salman. Aqil retained his spot on the foundation’s board for several years following the imposition of the sanctions. When he did eventually leave the board, the foundation added another Saudi preacher, named Aidh Abdullah al-Qarni, who, in a speech on the Arab-Israeli conflict, declared that “throats must be slit and skulls must be shattered. This is the path to victory.”

Qarni is far from the only extremist cleric with whom Salman has worked. The new king has also embraced Saudi cleric Saleh al-Maghamsi, an Islamic supremacist who declared in 2012 that Osama bin Laden had more “sanctity and honor in the eyes of Allah,” simply for being a Muslim, than “Jews, Christians, Zoroastrians, apostates, and atheists,” whom he described by nature as “infidels.” That didn’t put an end to Salman’s ties to Maghamsi, however. The new Saudi king recently served as head of the supervisory board for a Medina research center directed by Maghamsi. A year after Maghamsi’s offensive comments, Salman sponsored and attended a large cultural festival organized by the preacher. Maghamsi also advises two of Salman’s sons, one of whom took an adoring “selfie” with the preacher last year.

U.S. officials have explained that the purpose of President Obama’s visit is to forge a “close relationship” with the new Saudi king and to take his measure of the man. As Western officials consider how to engage with the new Saudi regime, Salman’s record of bolstering and embracing extremists needs to be part of the conversation. The worst-case scenario is that the new king shares the hard-liners’ views; the best case is that he is simply an opportunist, willing to accept intolerance in order to get ahead.

Many in the West wish for a Saudi king who will pass meaningful reforms and push back against incitement by local extremists. Sadly, Salman does not look to be that man.