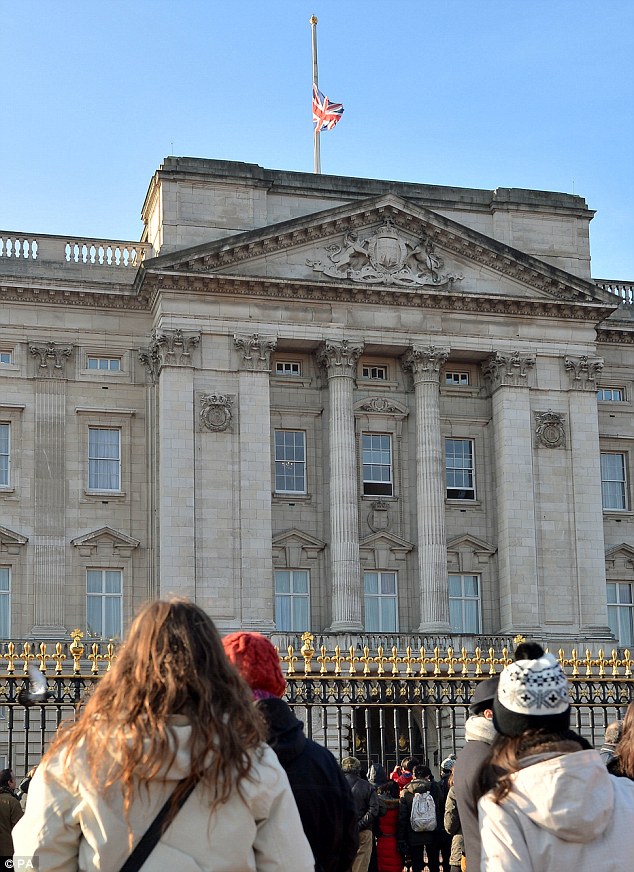 There was anger and disbelief yesterday that flags were lowered to half mast over Buckingham Palace, Downing Street and the Houses of Parliament to mark the death of King Abdullah of Saudi Arabia – despite his country’s shameful record on human rights.

David Cameron, Barack Obama and Tony Blair were among those who made gushing tributes to the authoritarian and hugely powerful monarch of the world’s biggest oil producing country.

Buckingham Palace announced that Prince Charles would join Mr Cameron in flying to Saudi Arabia today to pay their condolences personally alongside a host of world leaders. But the decision to lower flags to half mast over public buildings – also including Westminster Abbey – triggered a bitter backlash with widespread criticism that the monarch, who died aged 90, had done little to stop the regular public beheadings and floggings handed out by the authorities.

The leader of the Scottish Conservatives Ruth Davidson condemned the decision to fly flags at half mast as ‘a steaming pile of nonsense’. She added that it was a ‘stupid act on its own and a stupid precedent to set’. The flag at the Houses of Parliament, London, flies at half mast as a mark of respect for King Abdullah The flags at Whitehall and Buckingham Palace fly half mast Abdullah, who died on Thursday night of pneumonia, oversaw limited reforms in the conservative kingdom where women are still banned from driving, voting and even leaving the house without a male chaperone.

All citizens are unable to vote except in municipal elections, public beheading by sword remains a feature of the judicial system while political parties are banned and homosexuality is punished by death.

Saudi Arabia runs one of the world’s strictest criminal justice regimes. Its punishments include:

Banditry: Ampuation of hand and foot

However, the order came from the Department for Culture, Media and Sport yesterday for government buildings to lower flags as a mark of respect for the king.

The move was condemned as a ‘serious blunder’ by Ukip MP Douglas Carswell.

Referring to the civil service as Sir Humphrey – the mandarin from television comedy Yes Minister – he said: ‘On the day that Sir Humphrey lowers the Union Jack in Whitehall to mark the passing of the Saudi monarch, I wonder how many public executions there are going to be in Saudi Arabia?

‘Why are we doing this? I think Sir Humphrey has seriously blundered.’

Tom Copley, Labour London Assembly member, tweeted: ‘Disgusting that flags are being flown at half mast for the death of an autocrat. If anything we should double the length of the flagpoles.’

The director of Amnesty International UK, Kate Allen, said: ‘No one is flying flags for the scores of people Saudi Arabia executes each year after unfair trials.’ The reaction to the King’s death sparked a furious response. Former MP Louise Mensch said it was ‘unacceptable’ Prince Charles is flying to Saudi Arabia to pay his respects to the late king (pictured in 2007), who ruled his country according to strict Islamic traditions

Saudi Arabia, which last year is reported to have carried out 87 beheadings, has attracted further outrage after the first public flogging of blogger Raif Badawi, 31, who was sentenced to 1,000 lashes and ten years in jail for highlighting the kingdom’s harsh laws on dissent.

A video taken by a policeman last week of four colleagues dragging a woman down the street of Mecca and taking three attempts to behead her with a sword highlighted the crude brutality of the ruling regime’s justice system.

Downing Street and other Whitehall departments – along with Westminster Abbey and Buckingham Palace – were among prominent landmarks to put Union Flags at half mast after a request was sent out by the Department for Culture, Media and Sport.

Officials said it was a matter of protocol and that the formal request had been made by the Palace.

The Queen’s tribute to the Saudi King is in stark contrast to the reluctance to fly the Union Flag at half mast after the death of Princess Diana in 1997. She eventually broke with protocol to lower the flag on the day of the funeral – a week after the Princess’s death.

A notice issued on department’s website said: ‘It is with great regret that we learn of the death of the King Abdullah bin Abdulaziz, King of Saudi Arabia.

‘It is requested that all flags be half-masted from 8am today until 8pm this evening.

‘Any other UK national flags flown alongside the Union Flag when it is at half-mast should also be at half-mast. If a flag of a foreign nation is normally flown on the same stand as the Union Flag, it should be removed.

‘Local authorities are not bound by this request but may wish to follow it for guidance. Devolved administrations are responsible for issuing instructions for the flying of the Union Flag on buildings in their estate and others as necessary.’

In one of the most horrific cases during King Abdullah’s reign, 15 schoolgirls died after religious police stopped them leaving a burning building because they were not in Islamic dress.

The senior Labour MP Ann Clwyd questioned why Britain was paying tribute to a leader with an ‘appalling’ human rights record.

Former Conservative MP Louise Mensch asked: ‘When will we stop the goddamm cultural relativism and say NO IT’S NOT OK to whip women, stop them voting, working, having custody rights?’

After the death of Princess Diana in 1997, there was a public outcry because no flag was flying over Buckingham Palace – let alone one at half mast.

The reason was because the Royal Standard was the only flag traditionally allowed to fly, and only when the sovereign was present. The Queen was at Balmoral. The Queen responded to the outcry by ordering the Union Flag to fly at half mast on the day of Diana’s funeral.

Since then, the protocol has been for the Union Flag to fly when the Queen is not in residence, as an alternative to her standard. The union flag is at half mast upon times of national mourning.

Supporters of King Abdullah, who is succeeded by his 79-year-old half-brother Salman, claim that the absolute ruler followed a difficult path maintaining good relations with the West – Saudi Arabia is a key ally in the war on terror as well as an important business partner for the UK – while putting into place mild reforms.

Mr Cameron said the king ‘will be remembered for his long years of service to the Kingdom, for his commitment to peace and for strengthening understanding between faiths’.

Former prime minister Mr Blair said: ‘He was loved by his people and will be deeply missed. I knew him well and admired him greatly. Despite the turmoil of events in the region around him, he remained a stable and sound ally, was a patient and skilful moderniser.’

The Queen – now the world’s oldest monarch – said the king ‘will be long remembered by all who work for peace and understanding’.

Mr Obama praised the king’s ‘steadfast and passionate belief in the importance of the US-Saudi relationship’.

Tens of thousands gathered in the capital and Mecca as King Abdullah was buried in an unmarked grave, in keeping with Muslim traditions.

Saudi Arabia is a key customer of the British arms industry and an export centre for more than 6,000 UK companies.

The annual value of trade to Britain is in the billions, with 200 on-going joint ventures alone worth a total of £11.5billion.

To the UK arms industry, Saudi Arabia is a key target. In 1985, the controversial Al-Yamamah weapons agreement deal was signed – marking Britain’s biggest arms contract, worth £40billion. The deal to sell fighter jets was the subject of a fraud investigation that was halted by the government amid warnings it would damage relations with the Saudis. Former journalist Martin Bright, who went to work for the former Prime Minister, said Mr Blair’s response highlighted why he had to leave