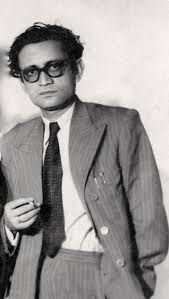 Qurattulain Haider, writer of the greatest Urdu novel ‘Aag Ka Darya’ had come to Pakistan in 1949. By then she had attained the stature of a world class writer. She joined the Press Information Department and served there for quite some time. In 1959 her greatest novel ‘Aag ka Darya’ was published which raised important questions about Partition and rejected the two-nation theory. It was this more than anything else that made it impossible for her to continue in Pakistan, so she left for India and permanently settled there.

Sahir Ludhianvi, one of the finest romantic poets of Urdu language settled in Lahore in 1943 where he worked for a number of literary magazines. Everything was alright until after partition when his inflammatory writings (communist views and ideology) in the magazine ‘Savera’ resulted in the issuing of a warrant for his arrest by the Government of Pakistan. In 1949 Sahir fled to India and never looked back.

Sajjad Zaheer, the renowned progressive writer, Marxist thinker and revolutionary who came to Pakistan after partition was implicated in Rawalpindi Conspiracy Case and was extradited to India in 1954. Ustad Bade Ghulam Ali Khan was a Pakistani citizen, regarded as one of the greatest classical singers of the sub continent, was so disillusioned by the apathy shown towards him and his art that he applied for, and was granted a permanent Indian immigrant visa in 1957-58. He migrated to India and lived happily thereafter. All of the above lived a peaceful and prosperous life in India and were conferred numerous national awards by the Government of India. Now let’s see the scene on the other side of Radcliff line. Saadat Hassan Manto a renowned short story writer migrated to Pakistan after 1947. Here he was tried thrice for obscenity in his writings.

Disheartened and financially broke he expired at the age of 42. In 2005, on his fiftieth death anniversary, the Government of Pakistan issued a commemorative postage stamp. On Aug 14, 2012 Manto was awarded Nishan-e-Imtiaz, the highest civil award by the Government of Pakistan; 57 years after his death. Zia Sarhadi the Marxist activist and a film director who gave us such memorable films as ‘Footpath’ and ‘Humlog’, was a celebrity in Bombay when he chose to migrate to Pakistan. ‘Rahguzar’, his first movie in this country, turned out to be the last that he ever directed. During General Ziaul Haq’s martial law, he was picked up by the army and kept in solitary confinement in terrible conditions. The charges against him were sedition and an inclination towards Marxism. On his release, he left the country to settle permanently in the UK and never came back.

Faiz Ahmad Faiz, one of the greatest Urdu poets of the 20th century was arrested in 1951 under Safety Act and charged in the Rawalpindi Conspiracy case. Later he was jailed for more than four years. Professor Abdus Salam the internationally recognized Pakistani physicist was disowned by his own country due to his religious beliefs. He went to Italy and settled there. He could have been murdered in the holy land but was awarded the Nobel Prize in the West for his contribution in the field of theoretical physics. Meanwhile his tombstone at Rabwah (now Chenab Nagar) was disfigured under the supervision of a local magistrate. This was our way of paying tribute to the great scientist.

Rafiq Ghazanvi was one of sub-continent’s most attractive, capable and versatile artists. He was an actor, composer and singer. He composed music for a number of films in Bombay like ‘Punarmilan’, ‘Laila majnu’ and ‘Sikandar’. After partition he came to Karachi where he was offered a petty job at Radio Pakistan. He later resigned and spent the rest of his life in seclusion. He died in Karachi in 1974. Sheila Ramani was the heroine of Dev Anand’s ‘Taxi driver’ and ‘Fantoosh’ released in the 50’s.She was a Sindhi and came to Karachi where her uncle Sheikh Latif was a producer. She played the lead in Pakistani film ‘Anokhi’ which had the famous song ‘gari ko chalana babu’. However seeing little prospects of any cinematic activity at Karachi, she moved back to India.
Ustad Daman, the ‘simpleton’ Punjabi poet had a style of his own. Due to his unorthodox views, many a times he was sent behind bars. Pandit Jawaharlal Nehru offered him Indian citizenship which he refused. The reward he received here was the discovery of a bomb from his shabby house for which he was sent to jail by none other than the populist leader Mr. Zulfiqar Ali Bhutto. Had Mohammad Rafi the versatile of all male singers of the Indian sub-continent, chosen to stay in Pakistan, what would have been his fate. A barber in the slums of Bilal Gunj in Lahore, while Dilip Kumar selling dry fruit in Qissa Khawani Bazaar, Peshawar.

Ustad Salamat Ali a bhagwan in Atari turned out to be a mirasi in Wahga all his life. Last time I met him at his rented house in Islamabad, he was in bad shape. We also find Nusrat Fateh Ali Khan who went to India and was treated like a god. His compositions recorded in India became all time hits not only in Pakistan and India but all over the world. Rahat Fateh Ali Khan, Faakhir, Ali Zafar and Atif Aslam frequently visit India and their talent is duly recognized by a culture where art and music is part of life. Adnan Sami has even obtained Indian citizenship and has permanently settled there. Salma Agha and Zeba Bakhtiar got fame after they acted in Indian films. Meanwhile Veena Malik is getting death threats here and is currently nowhere to be seen. Sohail Rana the composer was so disillusioned here that he permanently got settled in Canada. Earlier on Saleem Raza the accomplished singer immigrated to Canada. I was told by a friend that Saleem Raza was once invited by some liberal students to perform at Punjab University when the goons of Islami Jamiat-e-Talaba attacked him and paraded him in an objectionable posture in front of the students.

After returning to Pakistan the ‘chhote ustads’ of ‘star plus’ who achieved stardom in India have gone into oblivion, while Amanat Ali and Saira Reza of ‘sa re ga ma’ fame have disappeared. And ask Sheema Kirmani and Naheed Siddiqui, the accomplished dancers how conducive the environment here is for the growth of performing arts.
A country gets recognition through its intelligentsia and artists. They are the real assets of a nation. The cultural growth of a society is not possible without these individuals acting as the precursors of change. Unfortunately this state was not created, nor was it meant for these kinds of people. It was carved out for hypocrites and looters who could have enjoyed a heyday without any fear or restraint.The best policy for merry making in the Islamic Republic remains “Never to defy the status quo, be a part of it, promote it and therein lies the perfect recipe for success.