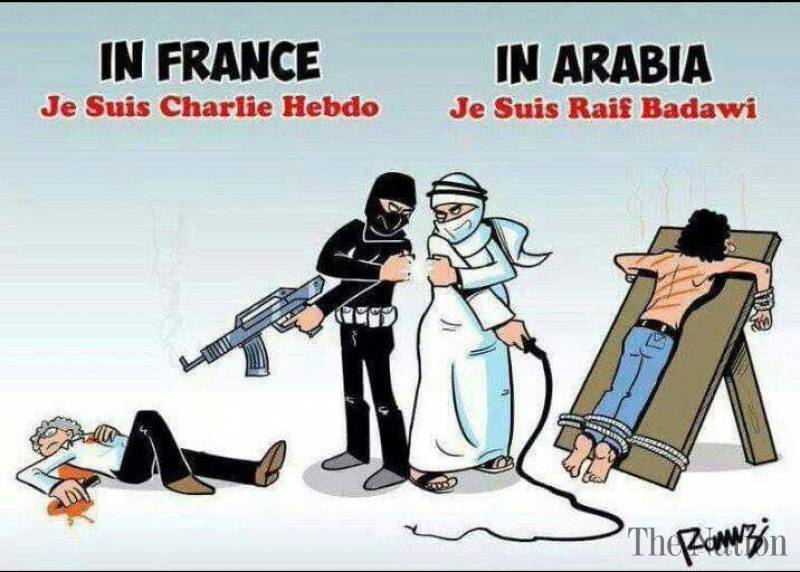 Blasphemy is in the news yet again, not that there is ever a point in time, when it isn’t, but this time we won’t talk about Pakistan.

On January 7th, two gunmen entered Charlie Hebdo, a French satirical newspaper, and shot dead 12 people. Before using their automatic weapons to fire 50 shots, they shouted Allahu Akbar making their intent clear;they were there to take revenge. To avenge the blasphemy Charlie Hebdo had committed by drawing caricatures of the Prophet.

While some cartoons may have been distasteful to some, but were they really something to kill people over?  If peace and tolerance is what all Muslims say Islam teaches, wouldn’t that fact be more believable if people actually showed these qualities at times like these?

Drawing a picture of the Prophet vs. brutally killing people in his very name. Which one of these do you think is worse?

It is not till around the 17th century that it was disallowed.  However, Shiites did not stop till much later. One example would be the paintings of the Buraq and the visit to heaven. (Miraj Nama, Biblio the que Nationale, Paris).

There are numerous other pictures available if one did a simple research. However, I cannot post any of them here, even just to corroborate what I am saying, for obvious reasons.

In fact an Iranian newspaper Hamshahri, popularly known for sponsoring a contest to draw cartoons about the Holocaust, displayed a depiction of the Prophet on their site till not so long ago.

But let’s put all that aside, and just concentrate on the fact that it is a complete no to make fun of religious figures or religion. Ok, fair enough. But shouldn’t one practice what they preach? Muslims make fun of other religions every single day. The Hindu Gods are routinely made jokes about. The statues and rituals that other religions hold dear are laughed at and ridiculed daily.

Any questions why the Bollywood movie ‘PK’ did so well in Pakistan?

Imagine what would happen if people of other religions were to start killing Muslims who made fun of their Gods and religion. From the fastest growing religion, it would be become the most dying one.

Even Saudi Arabia, a country that routinely and harshly deals with blasphemy, condemned the murder of the cartoonists.

Speaking of which, as we are on the topic of blasphemy and Saudi Arabia surprisingly condemning the murder of the catoonists, I should mention Raif Badawi.

Raif Badawi created a website called ‘Free Saudi Liberals.’ It was an online forum where people could discuss and debate about religion, secularism amongst other topics.

He was arrested by the Saudi ‘thought’ police and charged with insulting Islam.

Raif Badawi has been sentenced to 10 years in jail, 1,000 lashes, as well as a fine of 1 million Saudi Riyals. He is to be brutally and publicly flogged with 50 lashes every single Friday till the 1,000 are up. It matters not whether he heals fast enough, what kind of physical and mental pain he goes through, come rain or shine, but those 50 lashes will happen on the holy day of Friday.

The first session even took place on 9th of January 2015 and if reports are to be believed, he will not survive the next flogging. His lawyer, who was simply doing the job that a lawyer is taught to do, has been sentenced to 15 years in jail as well.

“How dare he do his job? How dare he insult the judiciary by placing a case that they did not think right.” This really makes me wonder if the words ‘justice’ and ‘fair trial’ mean anything there.

Incredulously, all this for thinking differently from what was expected of him to think –and that too from a country that commits blasphemy itself on some level every day.

They routinely destroy historical monuments and holy Muslim sites and shrines. The Prophet’s daughter’s shrine was destroyed. The house of Khadijah is now a block of toilets.

In 1804, they even tried to destroy the grave of the Prophet, but the outrage around the world stopped them. The Qasida al–Burda, an ode praising the Prophet inscribed on his tomb, was painted over.

The House of Mawalid (Bayt al-Mawlid) where the Prophet was born is going to be demolished so a huge royal palace (because one can never have enough of those) can be constructed on top of it.

A Hilton hotel stands on the site of the house of Islam’s first caliph, Abu Bakr.

Many of the columns in Mecca itself – the Ottoman and Abbasid columns inscribed with names of the Prophet’s companions have been destroyed. The column where he started his journey to heaven has been demolished. If this is not a pure disrespect of the religion and the Prophet, I don’t know what is.

Dozens and dozens of key historical sites dating back to the birth of Islam have been bulldozed over to make malls and buildings.

Malcolm X visited Mecca in 1964 and said the city was as “as ancient as time itself,” and that the partly constructed extension to the Masjid Al Haram “will surpass the architectural beauty of India’s Taj Mahal.”

If he could see it now, he would see an obnoxious parrot green version of Big Ben surrounded by hotels glowering over everyone. In another few years, he would see a donut, because the whole of the interior of the Sacred Mosque is to redone again, only to be replaced with a super duper modern donut-shaped building. Yes, a donut.

All this is not disrespectful but just thinking differently is?