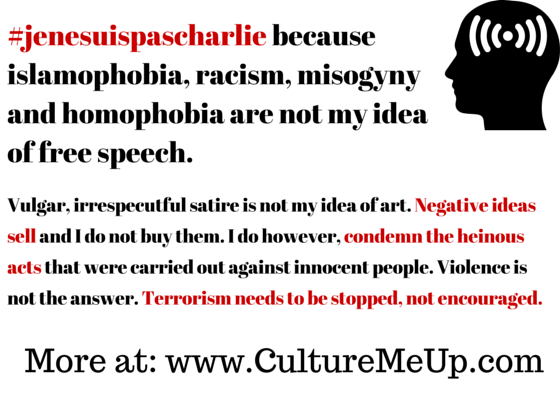 All those Pakistani “liberals”, “atheists”, “Marxists” and Islamophobes who were unconditionally, vehmently and opportunistically saying “I am Charlie” should also update their Facebook or Twitter statuses and publish the insulting cartoon/s of Prophet Muhammad (peace be upon him and his progeny) to show their solidarity with Charlie Hebdo magazine.

Charlie Hebdo was and continues to be an Islamophobe hate rag which is as much to be condemned as are anti-semitic statements by some Muslim clerics, anti-Ahmadi statements by almost all Sunni and a few Shia clerics and anti-Sunni Sufi anti-Shia statements and violence by almost all Takfiri Deobandi and Salafi/Wahhabi clerics. Why double standards?

Personally I protest, in a peaceful manner, the publication of insulting cartoons of Prophet Muhammad (pbuhp) by Charlie Hebdo.

Indeed, I condemn the massacre at Charlie Hebdo by the Deobandi and Salafi Wahhabi fanatics who neither respect human life, nor law.

Ironically, in both instances, the massacres were carried out by the Wahhabi Deobandi terrorists who are enabled by nothing else than West’s lasting alliance with the Saudi Arabian Kingdom.

I also condemn the hypocrisy of those who conondemn anti-semitism but condone, contribute to or/and deny Islamophobia. They generically balme Islam and Muslims but never clearly differentiate the majority of peaceful Sunni Sufi and Shia Muslims from a tiny violent minority of Deobandi and Salafi/Wahabi fanatics.

Indeed, I continue to condemn West’s hypocritical and opportunistic alliance with the Saudi kingdom which is a major enabler of the transnational Salafi Wahhabi and Deobandi terrorism today.

As Ali Abbas Taj noted, it is important to notice how few if any of the “liberals” are highlighting the Syria connection with the Paris massacre. (They hate Patrick Cockburn, Robert Fisk, George Galloway, Laleen Ahmed, Jahanzaib Hussain, Khurram Zaki and Aamir Hussaini for highlighting the blowback aspect of the West’s Jihadist investments in Syria, Libya and elswhere.) When one breeds Wahabi-Deobandi Frankensteins (FSA/ISIS/Al Nusra) in their backyard for carrying out regime change in faraway lands (Syria, Iraq etc) and allows allies like Saudi Arabia, Qatar, Turkey to radicalise the youth, how does one prevent terrorism rebounding within one’s one cities and towns. We have seen this in the shape of Deobandi Frankenstein in Pakistan and now we are seeing this in Europe.

More than 45,000 Sunni Sufis/Barelvis and 22,000 Shias have sacrificed their lives for the sake of their values. How many Pakistani (fake or commercial) liberals have offered their lives to uphold their own values?

The only true champions of liberalism and tolerance in Pakistan are those Sunni Sufis, Shias, Christians, Hindus, leftists etc who openly and clearly identify, condemn and resist the Deobandi roots of terrorism in Pakistan, the Deobandi-Wahhabi roots of terrorism across the globe, and are against all forms of bigotry and violence. Commercial liberals, Deobandi apologists and Islamophobes do not belong to liberalism, they belong to the dustbin of history.