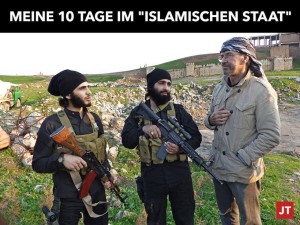 In his interviews with ISIS which he highlighted on  ABC and CNN as well as his own Facebook note, German Journalist Jürgen Todenhöfer  glamourises ISIS and misrepresents their “success”.  His reporting is a example of poor journalism which lacks context, background and which literally presents the ISIS point of view without presenting the opposing point of view.

On multiple occasions during this interview, Todenhöfer shows little remorse or condemnation, aside from token disapproval, at the atrocious claims made by the Salafi-Deobandi ISIS terrorists and is often reduced to becoming a conduit and mouthpiece for them.

From his encounters, he found many Sunni residents “unopposed to the new State… because they prefer it to the previous prevailing discrimination and oppression by the [former Iraqi prime minister] Maliki regime in Baghdad”.

“There is an awful sense of normalcy in Mosul,” Todenhoefer said in an exclusive interview with CNN.

“And during the Iraq war I was with the Shiite Government of Iraq and the [opposition] Sunni resistance.”

These are just some of the of the quotes taken from Todenhofer’s various interviews which display a disturbing Pro-ISIS bias.

In describing the repeated bombings targeted Shia civilians that have claimed hundreds of thousands of lives since 2003 as “Sunni resistance” and in describing Genocidal mass murderers and slave masters as “winners” and “wonderful”, Todenhofer displays a shocking insensitivity to the victims of ISIS.

As per Todenhofer, the planned genocide of Shia muslims by the ISIS is the outcome of Iraqi Sunnis not getting proper representation in the Iraqi government –  a questionable claim that does not altogether stand up to the actual situation published in this report by the Gulf Institute.

“What about the 150 million Shia, what if they refuse to convert?” Todenhoefer asked.

The impression conveyed by Todenhofer’s biased, insensitive and non-contextual report on ISIS is something like – Iraqi Shia government bad. Iraq Shia discriminate.  European ISIS recruits who are “winners” are outraged and motivated to “resist” Shia hegemony. If Iraqi Shia government good, then moderate Sunni will defeat ISIS.

Todenhofer critisizes the invasion of Iraq by the United States under George W. Bush but completely ignores the role of Saudi Arabia and Jordan in creating terrorism and unrest in Iraq from 2003.  His shoddy analysis only extends back to 2007 and ignores the time period between 2003-2007 when tens of thousands of Iraqis were killed by suicide bombings undertaken by Salafist Al Qaeda and which included the destruction of the Holy shrines at Samarra. Unfortunately, there is no mention of how the most prominent Shia religious authority in Iraq, Ayatullah Sistani has repeatedly condemned and stopped reprisals by Shia militias against Iraq’s Sunni muslims inspite of repeated suicide attacks against Shias by Salafist terrorists.

“The guy from New Jersey. This surprised me,” he added. “You don’t expect someone from N.J. going to join the Islamic State. … They were very tough, well informed. Some of them very successful in their own countries. In Iraq 30 percent are foreign fighters; in Syria 70 percent. They feel discriminated in their countries. They want to live in an Islamic state where no one can bother them and no one can discriminate against them. They are completely sure they will win this fight.”

As per Todenhofer 30% of ISIS terrorists are not even Iraqi! In one instance glamourises ISIS recruits as “winners” and then highlights who they feel “discriminated” in their countries of origin.  He does nothing to point out how abhorrent such a reasoning is.

Does discrimination justify the crimes of ISIS?

Does an allegedly non-inclusive government in Iraq justify the genocide of Shias worldwide!

Clearly, Todenhofer, similar to the Wahabi ISIS does not think to much of context.  There is no mention of how both Shias and Sunnis were brutally crushed by Saddam.  Shias have been oppressed and disenfranchised in Bahrain and Saudi Arabia for decades.  Have they been suicide bombing and mass murdering the general population??

Todenhofer never bothers to even address this question properly.  Patrick Cockburn presents not just a far more honest appraisal of ISIS and the true inspiration behind its bloodlust:

“The time is not far off in the Middle East, Richard, when it will be literally ‘God help the Shia’. More than a billion Sunnis have simply had enough of them.”

This is a quote by Prince Bander that precedes 9/11 and is in line with the virulently anti-Shia bigotry patronized and funded globally  by a powerful section of the Saudi ruling establishment.  Since then, the Salafist/Wahabist and Deobandi terrorists patronised by Saudi Arabia, Qatar and UAE have been the culprits in every major terrorism act from 9/11 to 7/7 and from Madrid to the Bali bombings.  He does not bother to mention the Jordanian King’s ominous incitement in 2004 when he talked about a “Shia Crescent”

Todenhofer even downplays the threat by ISIS to the rest of the world (except for Shia muslims who must collectively pay the price for the incompetent Iraqi government!)

“The reporter said he could not “totally exclude” the risk of returning fighters coming to plan attacks in the West but said he thought it was not the main concern. “Returnees are considered losers ‘who have not made it in the ‘Islamic State” So this is not the main risk, even though there was a plot by a returnee in Brussels. A greater danger may come rather from IS sympathisers who have not yet travelled to join the fighters.”

The complete lack of context, the omission of crucial facts and history and the one-sided regurgitation – token criticism notwithstanding – of ISIS highlights the perils of embedded journalism and exposes some troubling bias. The Perils of Embedded Journalism: How Jürgen Todenhöfer ends up glamourising ISIS