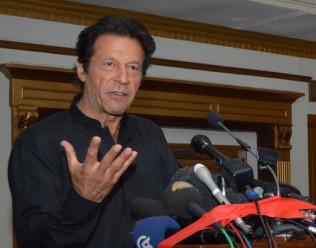 Pakistan Tehreek-e-Insaf (PTI) Chairman Imran Khan, dubbed as ‘Taliban Khan’ by his political opponents, was the one who urged the country’s civil and military leadership to take action against “banned sectarian outfits” during the All Parties Conference (APC) held in Peshawar on December 24, Pakistan Today has learnt reliably.

A source privy to the meeting said that the PTI chief called for “disarming banned sectarian outfits” and for coming up with a “long-term cohesive plan to disallow hate speech on sectarian lines”.

The moot called for massive countrywide action against terrorists, their financers and facilitators and also agreed on installing speedy trial courts manned by army officers.

“No state allows banned groups and non-state actors to take up arms and operate within the state boundaries like goons,” said the source quoting the PTI chief.

Khan said that Pakistan is blamed internationally for supporting terrorists because such groups are active and nobody stops them, reported the source.

According to the source, Khan said that he was threatened when he raised his voice against Lashkar-e-Jhangvi for killing of members of the Shia and Hazara community.

The army chief said the army would soon present a plan to the civilian leadership “to stop hate speech” and detailing action against armed groups, the source added.

The source said that General Raheel and Inter-Services Intelligence (ISI) Director General (DG) Lieutenant General Rizwan Akhtar “did not speak much” during the meeting.

General Raheel only gave a five-minute briefing, telling the participants that the army was ready to root-out terrorism from Pakistan, said the source.

“The nation is looking toward the political leadership which has to lead the way,” said the source quoting the army chief.

The political leadership agreed to the army chief’s suggestion to conduct meetings in Karachi and Quetta to help chalk-out a plan to bring peace and normalcy to the two provinces, said the source.

During the meeting, Pakistan Muslim League-Quaid (PML-Q) General Secretary Mushahid Hussain Sayed also urged the premier to take the terrorists head-on, adding that it was a “now or never situation”, said the source.

Mushahid’s bold speech set the tone for a unanimous decision in support of military courts.

The source said that Pakistan People’s Party (PPP)’s Aitzaz Ahsan was the first to oppose the idea of military courts, terming it an extra-constitutional move.

“In the past, military courts failed to deliver,” said the source quoting Aitzaz.

The source said that Aitzaz conceded to the idea of military courts after Senator Rehman Malik contacted PPP Co-Chairman Asif Ali Zardari who approved the idea of the courts.

According to the source, it was the PTI chief who pointed out that there should be “a timeframe for these courts”. Later, Aitzaz said that a new piece legislation with a sunset clause may be added to time bar the operation of the courts, said the source.

Aitzaz also urged the army leadership to take action against all terrorists without discriminating between “good or bad Taliban”, the source said.

In his briefing about madrassa reforms, Law Secretary Barrister Zafarullah Khan said that there were 22,000 registered seminaries across Pakistan out of which 54 percent were from the Deobandi school of thought, said the source. According to the source, the secretary said there was a need to reform the curriculum of seminaries as around 10 percent were involved in “hate speech on sectarian lines”.