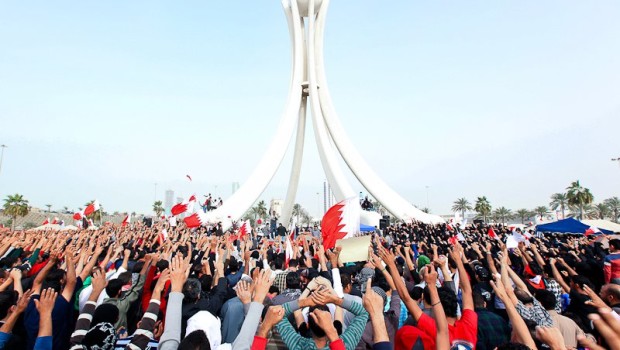 Bahrain’s national election planned for this Saturday portends no change in the al-Khalifa regime’s anti-Shi’a stance and is yet another futile exercise in sham democracy. The mainstream al-Wefaq Shi’a opposition party has decided to boycott the election because of perceived bias in the recently gerrymandered electoral districts.

Most observers view the election as another public relations ploy by the minority Deobandi Salafi regime to convince the outside world, especially Western countries, that all is well in the tiny kingdom. The regime is betting, perhaps correctly, that the West would not criticize its game of superficial electoral politics because of Bahrain’s participation in the US-led anti-ISIS coalition and Saudi Arabia’s influence in the process.

The regime’s sectarian repression of the Shi’a majority is deeply grounded in the same radical Sunni ideology espoused by Islamic State (ISIS or IS). In fact, extremist Sunni rhetoric has been tolerated in Bahrain in the name of fighting the Shi’a opposition and Iran.

IS enjoys significant backing in Bahrain among some pro-regime Sunni factions. Such ideological support, which is widely spread out among certain Sunni groups in Saudi Arabia and other Gulf Cooperation Council (GCC) states, is a key driver of IS in Iraq and Syria. This also explains why many IS jihadists come from the family-ruled Gulf states.

Promoting extremist Sunni ideology at home while ostensibly fighting IS in the Levant is a cynical ploy by the Khalifas to justify their continued suppression of Shi’a rights and policy of turning a blind eye to the poor living conditions in Shi’a villages and towns. Sitra, a tiny Shi’a island just south of the capital city of Manama, is indeed a world apart from the glitzy Khalifa strongholds in other parts of the island country.

Stoking sectarianism might be a winning strategy in the short term; it is certainly a losing proposition in the long run. It’s equally foolish for the Bahraini regime to believe that Western support, which is currently driven by the war against IS, would be sufficient to save them from the wrath of their people should a radical Shi’a uprising erupt.

Wefaq and the Election

The regime, and US policymakers for that matter, should take Wefaq’s boycott of the election very seriously. As a mainstream opposition political party, Wefaq has been willing to cooperate with the Sunni regime under the umbrella of the Khalifas as long as genuine reform is implemented.

For the party, meaningful reform includes free elections; reinstating the 1973 constitution; government accountability (particularly at the level of the prime minister); ending economic, political, and employment discrimination, especially in security and defense; and halting illegal arrests, trials, and convictions.

In fact, Wefaq supported the reform initiative of then-Emir Hamad in 2001-02 and endorsed the so-called National Charter believing that Hamad was committed to genuine reform. Several opposition figures came back from exile to cooperate with the new initiative.

Unfortunately, however, the only “reform” that resulted from Hamad’s initiative was changing the name of the country to the “Kingdom of Bahrain” and replacing his title of “Emir” with “King.” The reform initiative stalled because of opposition from Prime Minister Khalifa and the “Khawalids” in the office of the emir, and defense and judicial branches of government.

Article 17 of the Bahraini constitution states that a Bahraini citizen “cannot be stripped of his nationality except in case of treason. It is prohibited to banish a citizen from Bahrain or prevent him from returning to it.” Article 18 states, “People are equal in human dignity, and citizens are equal before the law in public rights and duties.”

Wefaq is the largest, most prominent and pragmatic opposition political party in the country. Its 18 members resigned from parliament three years ago to protest the draconian measures the ruling family has adopted against the opposition, particularly the Shi’a community.

Wefaq believes the regime will use the skewed election results to justify its massive human rights violations and continued campaign of harassment, arrests, and illegal detentions. Wefaq and other opposition groups—including Wa’d, al-Tajjamu,’ and al-Ikha’—decided to boycott the election, refusing to take part in what some of them call a pseudo-democratic political charade.

Jamil Kathim, who heads Wefaq’s Shura Council, said the election “does not represent the popular will and will not provide security for the country.” Matar Ibrahim Matar, a former Wefaq Member of Parliament who is currently living in Washington, DC, called on the government to postpone the election “until a national path forward has been agreed on.”

The opposition groups also urged King Hamad to “seek a national consensus to resolve the serious national issues that have bedeviled the nation since 2011 before holding elections.”

The regime, in defiance, has gone all out to publicize the elections based on Crown Prince Salman’s so-called “Common Ground” framework.  In addition to “Electoral Districts,” the other four parts of the framework include “Legislative Authority,” “Cabinet Formation,” “Judicial Reform,” and “Security.”

Is There a Way Forward?

The regime is pressing ahead with the election while ignoring the pragmatic demands of the opposition. Human rights Watch and Human Rights First have frequently highlighted the egregious human rights violations committed by the regime against innocent civilians and political activists.

But Bahrain has waged a fierce public relations campaign to dissuade Western governments from raising the human rights issue in the country. The Khalifa regime has used an army of “access” academics, former diplomats, retired senior military officers, corporate executives, think-tankers, and pliant media influential figures to act as informal advisers to “lobby” policymakers in Western capitals on behalf of the Bahraini regime.

What we are seeing now is a minority Deobandi Salafi regime refusing to share the political process with the country’s Shi’a majority on the basis of fairness, equity, and justice. If the United States believes continued tensions in Bahrain and in the wider Gulf are harmful to its strategic regional interests, it cannot remain oblivious to these violations and to the possibility of radicalization in Bahrain.

Due to the Khalifas’ refusal to seriously act on the concerns of the country’s Shi’a majority, the election on Saturday will not move the reconciliation process forward. Washington may be hoping to stabilize its relations with Iran through an agreement on the nuclear issue, but the growing chance of vicious sectarianism in Bahrain could undermine its search for regional stability.