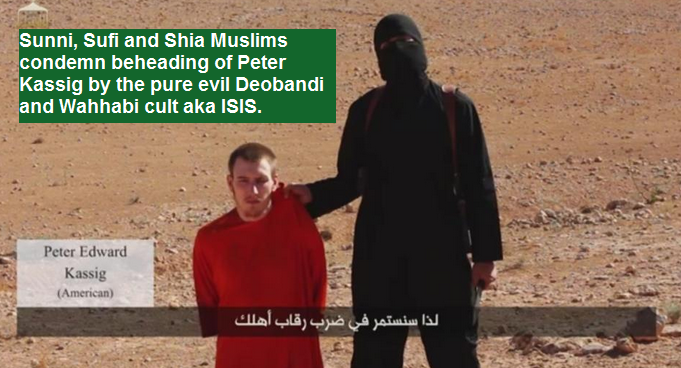 It seems that despite his conversion to Islam, Peter Kassig was considered an infidel or kafir by the ISIS because he had not converted to the violent Wahhabi or Deobandi cult.

Unlike the Wahhabi and Deobandi murderers and terrorists, Kassig was interested in saving and helping human beings instead of beheading them on the basis of idelogical or ethnic differences. Most probably he had converted to peaceful Sunni Sufi or Shia Islam instead of the violent Wahhabi or Deobandi cult – which is the common ideological cult of Al Qaeda, ISIS, Sipah-e-Sahaba (ASWJ), Al Nusra, Al Shabab, Taliban and Boko Haram.

Media analysts and rights activists must not ignore the “dogmatically complicated situation” referred to by Kassig despite his conversion to Islam. By “dogmatically complicated”, Kassig may be referring to the apostatization of all other Muslims by the Deobandi Wahhabi militants of the ISIS. In recent weeks, thousands of Sunni Arabs, Sunni Kurds and Shia Muslims have been killed by ISIS terrorists in Iraq and Syria.

According to media reports published on 6 October 2014, Kassig’s family had learned about his abduction and interest in Islam last October from his former colleagues but maintained a one-year silence while they waited for news. Last night (5 October), the couple from Indianapolis tweeted part of a letter from their son describing his faith. ‘In the letter,’ they wrote, ‘our son said he prays every day and that his situation is ‘dogmatically complicated’ – which we understand was a reference to his conversion. He wrote: I am in a dogmatically complicated situation here, but I am at peace with my belief. This may refer to his belief in the peaceful Sunni Sufi version of Islam.

On 16 November 2014, President Barack Obama confirmed the 26-year-old’s beheading, saying Kassig “was taken from us in an act of pure evil by a terrorist group that the world rightly associates with inhumanity.”

Perhaps President also needs to remind himself and other members of the US administration that the pure evil has a name, it is called Wahhabism, Deobandism and takfirism and its major idelogical and financial sponsor is none else than the Kingdom of Saudi Arabia. http://edition.cnn.com/2014/11/16/world/meast/isis-kassig-killing-images/ 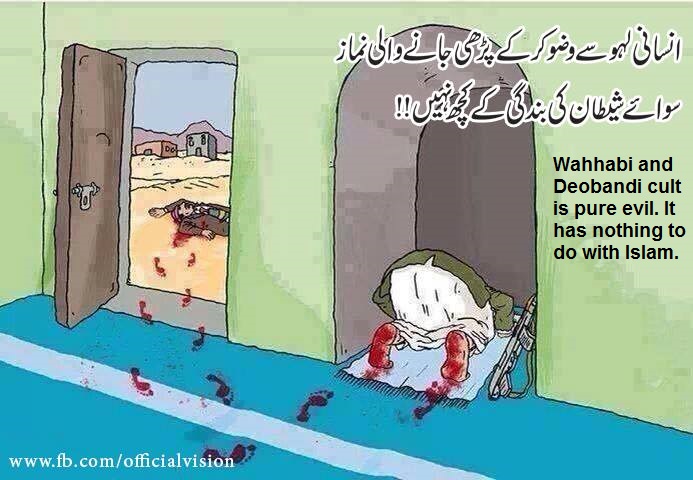