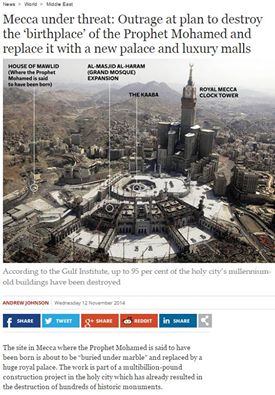 Many Pakistani “liberals” – increasingly being referred to as “Sufyani liberals” remain silent on the atrocities committed by Saudi Arabia. Many of these “liberals” are toadies and sycophants of the Saudi Stooge in Pakistan – Nawaz Sharif. Their silence on Saudi Arabia is defeaning. Just days ago 7-8 Pakistanis were executed in Saudi Arabia. Not a peep from our “liberals”.

“Saudi King destroys Prophet Muhammad’s historic home to build his own palace –> NO BLASPHEMY. All defenders of Al-Aqsa will be silent on this because it does not really matter; its not the Jews doing it, right? Dur Fitay Moun hay Muslim Ch(Ummah).”