Home  »  Newspaper Articles   »   Mecca under threat: Outrage at plan to destroy the ‘birthplace’ of the Prophet Mohamed and replace it with a new palace and luxury malls 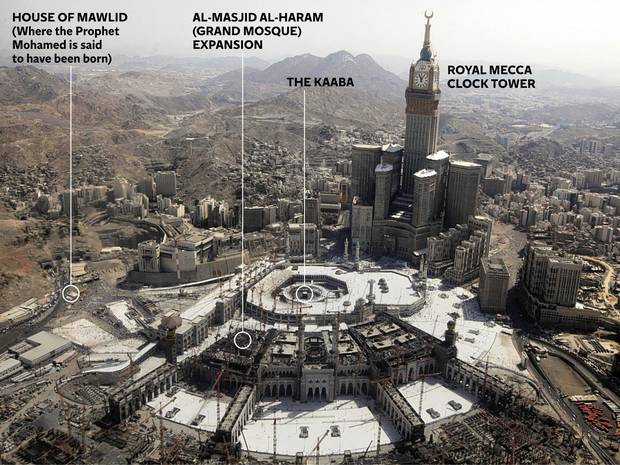 The site in Mecca where the Prophet Mohamed is said to have been born is about to be “buried under marble” and replaced by a huge royal palace. The work is part of a multibillion-pound construction project in the holy city which has already resulted in the destruction of hundreds of historic monuments.

The project, which began several years ago, aims to expand the al-Masjid al-Haram, or the Grand Mosque, to cater for the millions of pilgrims who make their way to the holy city each year for the Hajj, the pilgrimage to Mecca that all Muslims are obliged to make at least once.

Mecca is the holiest city in Islam because of its link to the birth of the Prophet, and because it is the site of the Kaaba, a cube-shaped building made from black granite and said to have been built by Abraham. The Grand Mosque is built around it, and Muslims face towards it when they pray.

Many have looked on aghast at the destruction of hundreds of historic buildings and monuments to make way for the Grand Mosque’s expansion. According to the Gulf Institute, based in Washington, up to 95 per cent of Mecca’s millennium-old buildings have been destroyed, to be replaced with luxury hotels, apartments and shopping malls.

He said that the House of Mawlid, thought to be where the Prophet was born in AD570, is likely to be destroyed before the end of the year.

The new royal palace is to be built for King Abdullah, the formal custodian of the mosque, for his visits to Mecca. Plans for the building, seen by The Independent, include the site of the House of Mawlid, which has recently been closed to pilgrims.

The plans have been verified by an independent source who added that many critics of the construction process are unwilling to speak publicly for fear of being punished by the regime.

Saudi Arabia is ruled by the strict Wahhabi version of Islam, which prohibits the worship of any object or “saint”, a practice considered “shirq”, or idolatrous.

The destruction of historic sites was defended recently by Saudi Arabia’s Grand Mufti, Sheikh Abdul Aziz Bin Abdullah al-Sheikh. According to Press TV, Iran’s English-language news organisation, he said the demolitions were necessary and that the nation should thank the government for the work, which is increasing the capacity of the mosque.

The rooms of the House of Mawlid are under the ground, and in 1951 a library was built over them to preserve them. This has now been closed to pilgrims. Signs on the building warn worshippers against praying. “There is no proof that Prophet Mohamed (peace be upon him) was born in this place, so it is forbidden to make this place specific for praying, supplicating or get blessing [sic],” it says.

Dr Alawi, one of the few voices to publicly oppose the destruction, claimed that religious police are posted outside the library to prevent worshipping. “The site of the Prophet’s birthplace has again come under imminent threat of being permanently forgotten under concrete and marble,” Dr Alawi told The Independent.

“Now that Hajj is finished, the 24-hour construction work has started again. They have finished the expansion on one side of the mosque. The royal palace, which will be five times bigger than the current royal palace, is to be built into the side of a mountain and will overlook the mosque.

“Between now and December the library and the rooms of the House of Mawlid are likely be built over. It’s inevitable that it will happen.

“It will be history. It will be gone. We are saying, ‘Let us excavate that house and preserve these rooms that are still there’.”

In September The Independent revealed that even the tomb of the Prophet – which is in the holy city of Medina in the al-Masjid al-Nawabi mosque – was not off-limits for some hardline Wahhabis.

A blueprint showing how Mecca will be developed
The article, which revealed that calls for the removal of the tomb had been made in a 61-page consultation document, caused an outcry in the Middle East, and forced a denial from the Saudi authorities, who had previously refused to comment on the construction works.

Details of that plan, obtained by a leading Saudi academic, Dr Ali bin Abdulaziz al-Shabal of Imam Muhammad ibn Saud Islamic University in Riyadh, were circulated to the Committee of the Presidency of the Two Mosques. Several pages of the consultation document were published in the presidency’s journal.

However, in a previous statement the authorities said: “The development of the Holy Mosque of Makkah al-Mukarramah [Mecca] is an extremely important subject and one which the Kingdom of Saudi Arabia, in its capacity as custodian of the two holy mosques, takes with the utmost seriousness. This role is at the heart of the principles upon which Saudi Arabia is founded.”