Home  »  Original Articles   »   Should Turkey be Ousted from NATO for Supporting ISIS? – by Ali Naqvi 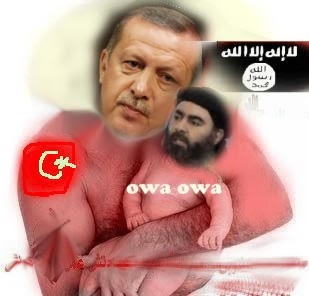 For several years now, West has silently watched Turkey’s slow descent into a radicalized Islamic state. Under Turkish President Recep Tayyip Erdogan’s religious extremist ideology, and his fascination with returning Turkey to the Islamic caliphate stature, the country continues to pursue a fundamentalist agenda. But now Turkey’s extremism has taken a new turn. The country brazenly supports the Islamic State of Iraq and Syria (ISIS, also known as ISIL), the worst terrorist organization the world has ever seen. The key question is: Is it time for NATO to consider removing Turkey from NATO?

Turkey’s support for ISIS is so obvious and troubling that even Turkish parliamentarians couldn’t help but to scream in disgust. The leader of Republican People’s Party (CHP), the main opposition party of Turkey, Kemal Kılıçdaroğlu said “I believe the government is still helping ISIL. There is some information showing that some of the weapons and money ISIL has is of Turkish origin. ISIL spokesmen do not refrain from speaking about that [assistance] openly. If you pay attention, you will notice that U.S. Vice President Joe Biden did not apologize for saying that Turkey had helped [ISIL]; he apologized for making a conversation between himself and Erdoğan public that was supposed to be confidential. The statement from the U.S. shows that too. ISIL militants [wounded in clashes] are being treated in Turkey. From a humanitarian point of view, there is no doubt that you have to give medical assistance to everyone in need. But you must not let that militant go back to fight after recovering. You should arrest them and keep them in custody if necessary. What is the government doing? They are sending the militants back; this means helping them. If the government wants to fight against ISIL, it must first stop helping them. It should control the cells recruiting people for ISIL in Turkey; it should close the borders to militants traveling here from abroad and joining ISIL. In summary, the government should take measures against ISIL in Turkey and on its borders.” (Interview reported in Hurriyet Daily News. See article http://www.hurriyetdailynews.com/chp-leader-kilicdaroglu-turkish-army-should-stay-out-of-syria.aspx?pageID=449&nID=72674&NewsCatID=409)

Turkey opened its borders to feed a never-ending supply of terrorists into Syria. It protected them, provided them with weapons, and when they got sick, treated them to send them back into Syria. The terrorists relied on Turkey for all the support they needed and the country never disappointed them.

Thus it is not surprising that when misguided teenagers and radicalized Muslims from all over the world desire to join ISIS, they fly into Turkey. When other radical organizations want to send weapons to ISIS, the weapons pass through Turkey. When ISIS needs financial support, it is Turkey that channels the money. In a matter of few years, Turkey has become the logistical hub and ground zero for launching and supporting one of the most lethal terror machines the world has ever seen.

And when the whole world stood in a state of shock, observing the Nazi style atrocities being conducted in the area controlled by ISIS, Turkey didn’t raise an eyebrow. As ISIS slaughtered thousands of civilians and beheaded Americans and British civilians, the civilized world wondered why Turkey would support a group like that. Horrified by the images of massacres, citizens of Europe are worried about the growing threat of a major terrorist supporting country right in their backyard.

With significant arm twisting and pressure from the US government, Turkey reluctantly agreed to allow some Kurds to cross its border to support other Kurds fighting against ISIS in Syria. The Turkish government issued some unenthusiastic statements condemning ISIS and the Turkish military sent a dozen or so tanks to its border with Syria – where they silently stood and watched the massacre of hundreds of Kurds by ISIS across the border in Kobane.

Turkey’s ambitions are clear and the country’s radical orientation can be directly attributed to its overwhelming desire to emerge as the leader of Sunni Muslims – that is to regain its stature of a Sunni Muslim caliphate. While probably inspiring for Turks, this fundamentalist line of thinking is extremely dangerous for the civilized world.

Above and beyond the military alliance, NATO also represents the ideological and philosophical orientations of the member countries. As with any organization, the power of common and shared values solidifies the bonds of camaraderie. When those values are compromised, a strong and unified response is necessary.

The values and ideological bonds that unite the NATO members were reflected in the last 25 years of NATO interventions. In the recent history, the organization has fought against ruthless regimes and brutal armies (for example in Bosnia, Herzegovina, Kosovo, and Afghanistan). These interventions were in response to massacres (like Srebrenica massacre) and terrorist attacks (like September 11th, 2001). But now NATO is confronted with a new dilemma as one of its own members is actively supporting a brutal terror group while several other members are fighting against the lethal ideology of ISIS.

When Turkey joined NATO it was a promising, emerging country with the potential to join the ranks of progressive nations. Now it has degenerated into a terror haven and logistical hub for terrorists.

It is time for NATO to take a firm action to remove Turkey from the NATO membership. Turkey has demonstrated reckless behavior and has directly supported terrorism. The prestige, the mission, and the shared values of NATO are at stake here. If Turkey is not ousted, the alliance will risk losing its credibility and moral authority. It is decisions as such that challenge the character and integrity of organizations. For NATO, it is time to do the right thing: Fire Turkey from NATO.

Turkey’s values and behaviour have changed radically in recent years, especially under the rule of convicted Islamist and president Recep Tayyip Erdogan. The country no longer shares the same human and political values as the rest of NATO, and in connection with the Islamic State’s war against fellow NATO members, it has become clear that Turkey can not be a trusted ally if the enemy also adheres to the same strict interpretation of Islam as that of Turkey’s present rulers. This is why Turkey can no longer be member of NATO:

1) Turkey does not support basic human rights, such as free speech, the equality of women and religious freedom, which NATO countries fight and risk lives to protect around the world. Turkey simply does not share these basic, crucial values with the rest of NATO.

2) Turkey allows enemy combatants from the Islamic State to enter from Europe to Syria and Iraq, where they train to kill Europeans — and then allows the jihadis to return to Europe, where they attack the people of fellow NATO countries. According to NATO’s Article 5, members should protect each other, not allow enemy soldiers use their land as a transit for attacking other member countries.

5) Turkey has allowed the slaughter of Kurds on the border of Turkey. There are even reports of how Turkey refused to give medical aid to deadly wounded Kurds, while treating Islamic State fighters in Turkish state hospitals. Aiding a warring enemy of NATO members and exhibiting such a cynical approach to solving a local problem with an unwanted population group (the Kurds, not the Islamic State…) is unacceptable behaviour for a NATO member.