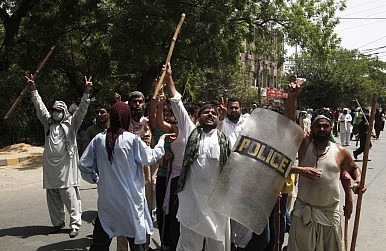 In an audio statement released last week, the former Tehreek-e Taliban Pakistan (TTP) spokesman Shahidullah Shahid announced that he and five other commanders from the terror group have given the bay’ah (oath of allegiance) to Abu Bakr al-Baghdadi, the self-styled “caliph” of the group that describes itself as the Islamic State (IS), and is also known as ISIS and ISIL. This is the first public defection of commanders from the Afghan and Pakistani Taliban groups to IS.

Their defection portends further divisions within Pakistan’s jihadist community, which has rapidly splintered since the killing of the TTP leader Hakimullah Mehsud last fall in a U.S. drone strike. These divisions could result in heightened violence between anti-state jihadist groups in Pakistan. But Pakistan is also likely to see a rise in both sectarian and overall violence. Down the road, there is a risk that Pakistan’s disparate jihadist groups could consolidate into a united front, even if the probability of such a scenario is low at present.

While Shahid has given the oath of allegiance to al-Baghdadi, it’s unclear whether he has been accepted as a member of IS. In his audio statement, Shahid said that he had given the oath of allegiance to al-Baghdadi on three previous occasions via a number of emissaries, but still awaits a response. Evidently, al-Baghdadi has yet to respond affirmatively to Shahid’s overtures, though the reasons for his silence are unclear. It may be that IS has yet to develop an actual strategy for South Asia, though another South Asian jihadist group, Ansar al-Tawhid fi Bilad al-Hind defected from the al-Qaeda orbit into the IS world, but it is India and Afghanistan-centric.

Meanwhile, the core leadership of the two major Pakistani Taliban factions, the TTP and its Jamaatul Ahrar splinter group (TTP-JA) are currently hedging between supporting al-Qaeda and IS – the two major transnational jihadist fronts. Both groups have issued statements calling on al-Qaeda’s affiliate in Syria, Jabhat al-Nusra, and IS to reconcile. They will likely continue to issue statements of support for IS that fall short of making an oath of allegiance to the group.

IS is ascendant in the Middle East and al-Qaeda has been weakened in South Asia. But the Afghan Taliban finds itself in a favorable position as the United States completes the withdrawal of its combat forces this year. It has a decent chance of seizing significant portions of southern and eastern Afghanistan from the Kabul government in the coming years. And so the TTP and TTP-JA cannot afford a hostile relationship with the Afghan Taliban, which could very well be in control of their backyard.

Major commanders associated with the TTP and the TTP-JA are certainly discomfited by the defection of mid-level commanders to IS, which poses a potential threat to their hold over their respective fiefdoms inside Pakistan. They will have to take active measures to contain these new competitors. This containment strategy could involve direct violence against pro-IS commanders, as well as seeking to outdo them in attacks against the Pakistani state and religious minorities. The prime leadership of the TTP and TTP-JA has avoided public criticism of IS. Similarly, they may be reluctant to attack outfits that have moved into IS’s orbit. While this is a battle they may hope not to fight, it may also be one they cannot avoid.

The six TTP commanders who have moved into IS’s orbit come from the central region of the Federally Administered Tribal Areas (FATA) and Khyber Pakhtunkhwa (KP) province. This region, in particular the Kurram Agency, was hit by a full-scale sectarian war from 2007-11. While violence there has been reduced significantly, the major militant commanders in this region remain at-large. Undoubtedly, they will work to prevent encroachment by IS-aligned forces in their areas. At the same time, though, given IS’s extreme anti-Shia focus, both the TTP and IS-aligned militants could once again renew sectarian violence in central-FATA and KP.

While the threat of Sunni-Shia sectarian violence elevates, so too does the potential for intra-Sunni sectarian tensions. Curiously, Shahid’s audio statement suggested that he is now styling himself as a Salafi, the puritanical sect to which al-Baghdadi belongs. Shahid’s statement was released by a media outlet called al-Muwahideen (The Monotheists), a terminology that is particularly indicative of a Salafi bent, given its fervent opposition to all sorts of shirk (polytheism or association of partners with God).

While al-Qaeda is also a Salafi jihadist group, it has had an alliance of convenience with militant organizations from the Deobandi subsect. Indeed, the amir of its new South Asia affiliate is a Deobandi cleric. And Shahid’s apparent transition to Salafism may indicate that a sectarian conversion is perhaps a prerequisite for Pakistani jihadist groups to associate themselves with IS. The Deobandis as well as the many Deobandi militant clerics and seminaries will not find this congenial.

The Salafi factor raises the issue of Lashkar-e Taiba (LeT), which perpetrated the 2008 Mumbai attacks. LeT comes from the Ahl-e Hadis sect, which is effectively the South Asian equivalent of the Salafis. And so while the LeT prime organization is likely to remain aligned with the Pakistani security apparatus, there is potential for low-to-mid-level fighters from LeT to defect and join IS, moving from one Salafi jihadist group to another, seeing IS as a more authentic jihadist force – one that is not “polluted” by a partnership with a “secular” state like Pakistan.

Jihadist groups in South Asia are in the midst of a major transitional phase that is taking place against a backdrop of a global jihad that itself is in a state of flux. Old alliances and relationships will be tested. Still, senior commanders with the TTP and TTP-JA are likely to publicly maintain a polite disposition toward IS while affirming their loyalty to the Afghan Taliban. Maulvi Fazlullah, the amir of the weakened TTP, issued an audio statement this weekend in which he renewed his allegiance to Mullah Omar. The TTP-JA is more likely than the TTP to ally with IS, but its spokesman Ehsanullah Ehsan will probably continue to tease the media and other observers with statements that adulate IS but baulk at formally associating with the group. For the TTP-JA, its primary goal is to supplant the TTP as the major umbrella organization for anti-state jihadists in Pakistan. And so it will seek to maintain good ties with all regional and transnational jihadist outfits as long as possible. But if the impact of this small group of IS defectors is a wave rather than a ripple, then the TTP-JA, in particular, may have to abandon its diplomatic balancing act and choose a side.