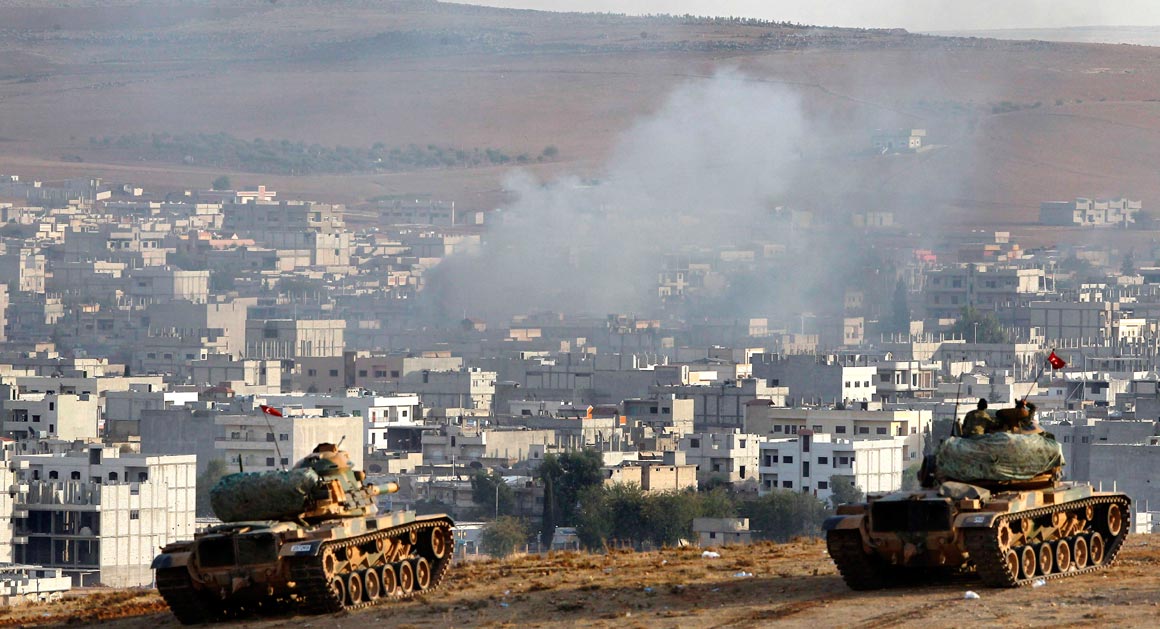 The Kurdish town of Kobane in western Syria is under siege by the Islamic State. A U.S.-led coalition has hit at the jihadists sieging Kobane—with 13 strikes on Wednesday and Thursday—but bombs alone may not suffice. It is the Turkish military, whose tanks are currently sitting on the Syrian border, that may be in the best position to save stave off a mass slaughter. But the Turks refuse to join the fight, even though the Turkish Parliament voted on Oct. 2 to deploy the Turkish army to fight in Iraq and Syria, and to allow foreign troops on Turkish soil. A week after the vote, Turkey has not participated in any U.S.-led operations against the Islamic State.

Turkey’s stock as a Western ally is plummeting. Ankara stubbornly resists joining the coalition unless it broadens its fight to topple Syria’s Bashar al-Assad. Turkey’s 200 or more F-16 fighter jets sit idle as the Islamic State makes alarming gains across Syria and Iraq. This stands in sharp contrast to other Muslim world allies – including Saudi Arabia, Bahrain, the United Arab Emirates, Qatar and even Jordan – that have taken part in the aerial campaign against the Islamic State.

Turkey’s absence is conspicuous. It’s the only NATO ally among these Muslim world partners. To be clear, the fight against the Islamic State is not a NATO mission, but it serves as a reminder of how little Erdogan’s regime has done to help preserve order in the Middle East.

In many ways, Turkey has made the fight against the Islamic State more difficult. Apart from permitting some unarmed American drones to fly out of its territory, Ankara has refused to allow the West to operate from Turkish airbases. This has forced strike aircraft to fly their sorties from the Al Udeid airbase in Qatar, Shaheed Mwaffaq in Jordan or Al Dhafra in the UAE. As for the Incirlik air base that NATO operates in Eastern Turkey, Ankara has made it clear that for the time being, it is currently off limits for armed operations.

But this should come as no surprise. Incirlik has long been off limits. Ankara refused to allow the United States to utilize the air base for kinetic operations in the 2003 Iraq war and its aftermath. Instead, the base has been used for logistics, support and training. Turkey owns the facility, but technically, according to Article 5 of the NATO charter, it cannot restrict the NATO activities on the base in an approved operation. Still, it can restrict U.S. personnel and equipment. And it has consistently done so, to the frustration of American military planners.

Admittedly, one could argue that the Turks were right to hold off on joining America’s ill-fated war in Iraq. But that would be ignoring Turkey’s role in other international conflicts. Take the NATO-led mission in Afghanistan since 2001, where Turkey limited its role to logistics and training and refused to take part in combat. Similarly, Turkey deployed nearly 400 personnel to NATO forces in Kosovo, as well as other personnel to other international operations in the Balkans, but with responsibilities limited to training, observation and support.