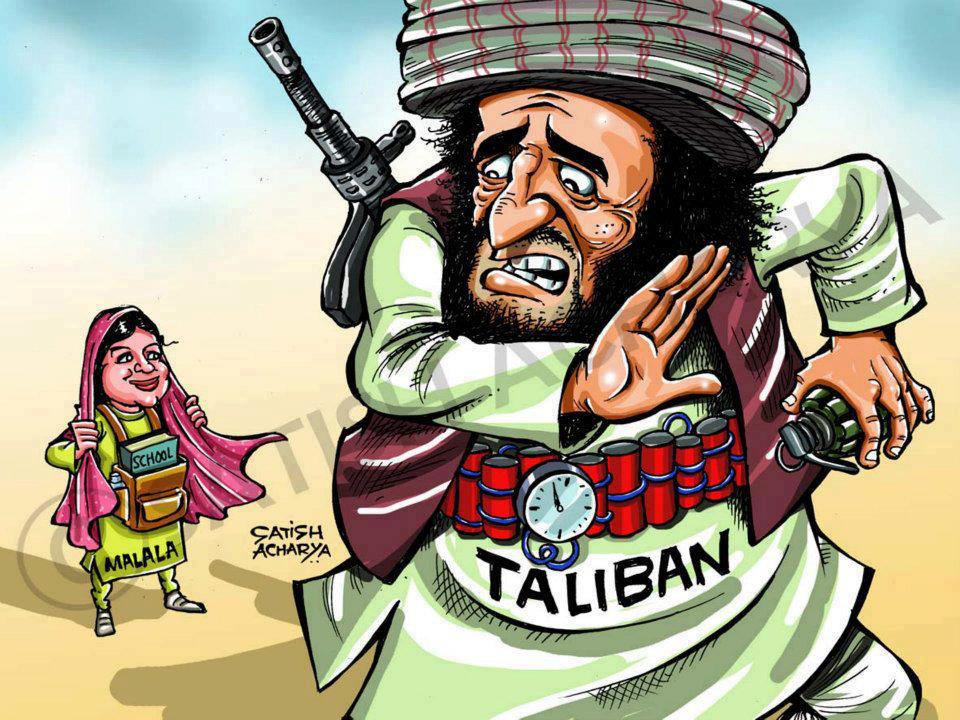 ISLAMABAD: Malala Yousafzai’s winning the Nobel Peace Prize and becoming the youngest recipient of the prestigious award has certainly come as a rude shock to the Tehrik-e-Taliban Pakistan (TTP) which had expressed joy last year over her missing out on the Nobel Peace Prize.

While the 17 year old Malala’s courageous efforts to promote female education against all odds have finally been recognized internationally, the TTP headed by Mullah Fazlullah, who had ordered the October 2012 shooting of Malala for advocating girls’ education despite his repeated warnings, has not reacted on her winning the Nobel Prize so far. But the Taliban must be extremely irritated over her latest accomplishment because exactly a year ago [on October 12, 2013], the TTP had declared that they were delighted that Malala missed out on the Nobel Peace Prize. TTP spokesman Shahidullah Shahid said in his statement that Malala had done nothing to deserve the Nobel, which went to the Organisation for Prohibition of Chemical Weapons for its work to rid the world of chemical arms.

“We are delighted that Malala didn’t get the Nobel Peace Prize. She did nothing big so it’s good that she didn’t get it. This esteemed award should have been given to the real Muslims who are struggling for the supremacy of Islam. Malala is against Islam because she is secular”, the TTP spokesman had added. Hardly a day before the announcement of the 2013 Nobel Prize winners, Malala Yousafzai had won the European Parliament’s Sakharov rights prize. However, the TTP spokesman had condemned her achievement as usual, claiming that Malala’s struggle against Islam was the most important reason for the West to honour her.

While Shahidullah Shahid seems to have been flabbergasted by Malala’s winning the Nobel Prize, the Jamaatul Ahraar, a splinter group of the TTP, has criticised the choice of Malala for the 2014 Nobel Peace prize, calling her “an agent of non-believers”. The Jamaatul Ahraar, which is led by Commander Omar Khalid Khurasani and which had discarded the TTP in August this year, has tweeted that Malala was being used by non-believers for propaganda against Islam. “Malala Yousafzai speaks so much against guns and armed conflicts. Does she not know that the founder of her Nobel Peace Prize had invented explosives”, tweeted the Jamaatul Ahraar’s spokesman Ehsanullah Ehsan. The first Nobel Peace Prize was awarded in 1901, as established in the will of the Swedish chemist Alfred Nobel, the inventor of dynamite.

Ehsanullah Ehsan was the central TTP spokesman at the time of the Malala attack and had claimed responsibility for the incident in an email, saying: Malala has been attacked because she was anti Taliban and secular and was doing negative propaganda about Muslims. She considers President Obama as her ideal leader and thus is the symbol of the infidels and obscenity. She was simply liable to death for opposing Islamic Shariah. The TTP successfully targeted her in Mingora, although she is a girl and TTP does not believe in attacking women. But the attack was obligatory because she was leading a campaign against Islam”.

While the incumbent TTP spokesman has opted to remain silent over Malala’s latest achievement, the fact is that Shahidullah Shahid had denounced her courageousness on the first anniversary of the incident [in October 2013], vowing that the Taliban would keep trying to kill her. “We tried to kill Malala because she accepted that she attacked Islam. If we get another chance, we will definitely kill her and that will make us feel proud. Islam prohibits killing women, but except those that support the infidels in their war against Islam”. Malala’s commitment to her cause, which is clearly opposed to the teachings of the Taliban, is surely annoying for the TTP because she keeps pursuing her mission despite being shot for defying a ban on female education which was imposed by Mullah Fazlullah who had been ruling the roost in Swat till 2009 when Malala was an ordinary student there.

In the second week of October 2013, after Malala addressed the United Nations’s session, a key TTP leader Commander Adnan Rasheed – a former Pakistan Air Force (PAF) officer who is accused of involvement in a plot to kill Musharraf – wrote a curious letter to her and invited her to return home, end her campaign against the Taliban and continue her education at “any madrassah” for girls near her home area. While Rashid stated that the shooting of Malala was an “individual” act, the fact is that the organisation had claimed responsibility for it and those arrested after the attack have already named Fazlullah as the mastermind of the assault. The Pakistan Army spokesman Maj Gen Asim Saleem Bajwa had announced on September 12, 2014 the arrest of all 10 TTP terrorists involved in the assassination attempt on Malala.

“The entire gang involved in the assault on Malala, Kainat and Shazia has been busted. The gang known as ‘Shura’ was part of the TTP. The arrests have been made through an intelligence-led operation which involved the Pakistan Army’s Swat-based formation, ISI, Military Intelligence and the police. Communication between the ‘Shura group’ and Mullah Fazlullah was done through micro SD cards which were transported by couriers to avoid interception by agencies. All ten accused hail from Malakand”, he had added. Investigations into the October 9, 2012 attack have already revealed that it was ordered by Mullah Fazlullah for defying her decree against female education in the Swat Valley.

Investigators believe the attack on Malala was a well-planned and symbolic attempt to discourage the liberal voices in a backward region of the country where over 400 girls’ schools were either bombed or set ablaze between 2007 and 2009 by the fanatic followers of Fazlullah. Malala, who used to idealise Ms Benazir Bhutto and wanted to work for the cause of education by launching a political party, became a symbol of resistance against those opposing female education in Swat. Writing a blog for the BBC under the pseudo name even before the 2009 military operation, Malala had won international recognition for highlighting the atrocities of Fazlullah’s henchmen who burnt hundreds of girls’ schools and terrorised the valley by carrying out suicide bombings targeting the security forces.

The fearless Malala who championed the cause of girls’ education and dared to criticise the Taliban for destroying girls schools and terrorising school going girls, courageously defied Fazlullah’s ban on female education and continued to study, till the ouster of the Taliban from the valley in 2009. Therefore, the Fazlullah-led Taliban wanted to make an example of Malala, just like Benazir Bhutto, another liberal voice, who used to criticise the radical Islamists for their extremist approach and high-handed tactics. The TTP’s responsibility claim for the spineless murder attempt proved that the fanatic Taliban can go to any extent against those who don’t share their ideology. From a young girl who was determined to go to school by defying Mullah Fazlullah’s decree against the female education, to a global icon, Malala’s story is simply motivating to say the least.