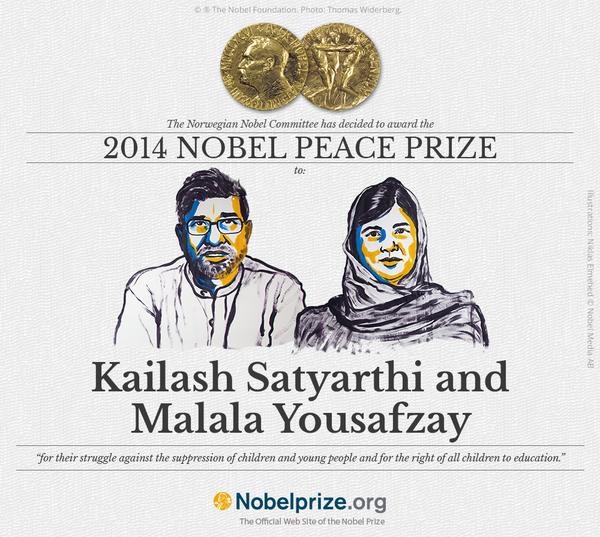 Can’t say fairer than that for an honour that has often been awarded for doing absolutely nothing. Remember, Obama? Fantastic news, when there is so much misery and pain in the world, it’s wonderful to know people who challenge this are acknowledged and in such a prestigious way.

Wonderful symmetry too. {A combination of Snowden and Putin may have been equally flattering, though. A tough call for the committee.But then the prize only goes who the West likes, otherwise Edhi may have also won it a while ago (Google, if you don’t know of him). }

We all loved the brave and young Malala and I, for one, am happy for her to win the prize. However, Kailash Satyarthi is also a deserving winner of the Peace Prize, even more deserving than Malala. This is richly deserving appreciation of what he has done and is doing in so bravely saving so many children from slavery. He continues to tirelessly fight against the strong and rich in India. What an inspiration! “At the age of 26 he gave up a promising career as an electrical engineer and dedicated his life to helping the millions of children in India who are forced into slavery by powerful and corrupt business- and land-owners. His original idea was daring and dangerous. He decided to mount raids on factories — factories frequently manned by armed guards — where children and often entire families were held captive as bonded workers.”

Of course, we all know Malala. Apart from being astoundingly brave and mature beyond her years, she is truly amazing young woman doing great work when the youth of her age are obsessing about the banal aspects of social media and their appearance. Every time I have seen her speak, I have been awe-struck by her unflinching confidence and optimism. She is a ray of light in a world full of darkness. I am happy that this decision was taken this year and not last year. In the meantime we could witness Malala putting even more efforts in doing her splendid work. Malala genuinely represents far more than getting shot in head at a tender age.

It may be a good idea for Malala and Kailash to exchange their decorations as their countries exchange fire on the borders.

Between hope for Malala and realism – an eyewitness account of the Nobel Peace Prize announcement – by Dr. Rehan Naqvi