As Deobandis feast on Shia Muslims, the media and ‘civil’ society look away – Dr Abbas Zaidi 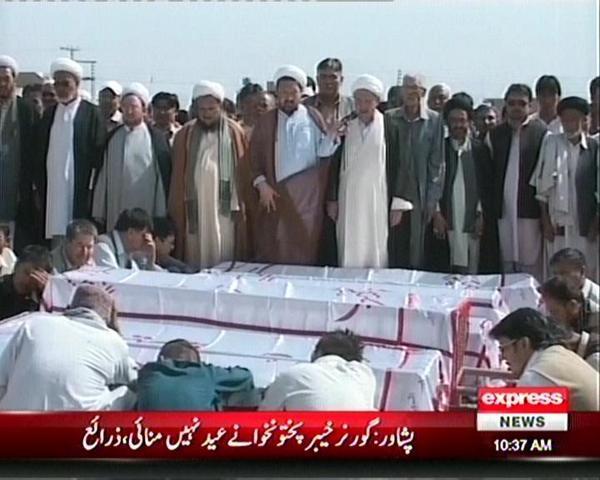 In two days (October 3 and 4, 2014), the Deobandis have struck Shias in Baluchistan and the KP with deadly precision, but with just one honorable exception, the media and the self-styled civil society of Pakistan the media have not said a word about it, let alone condemn it. It is thanks to the media and the ‘civil’ society that the Shia genocide in Pakistan has been naturalized in Pakistan. This blog has consistently written about the Deobandis’ genocidal cmapigns against the Shias, the Barelvi-Sufi Sunnis, the Ahmadis, the Hindus, and the Christians.

Thanks to the efforts of Let Us Build Pakistan and a few non-mainstream blogs and web sites, people have come to accept that Pakistan is a land of genocide. Many Pakistani hournalists and opinion makers have raised their voices against the Deobandi assassins who are backed by the Middle Eastern monarchies and some Ziaist sections of the Pakistan Army. But when it come to the Shia genocide, there are few voices even from these very jouranlsits and opinion makers.  Let us take a look at the genicidal bombings of the last two days. With the exception of Daily Times, no newspaper used to word “Shia” to describe the victims

. All newspapers, including Daily Times, desisted from using the word “Deobandi” to identify the killers. If there was a mention of “Shia,” it was done in a way to obfuscate the nature of the attacks. For instance, Express Tribune distanced itself from the facts of the bombing byattributing them to a ploice officer. It reported, “The official said that most of the victims belonged to the Hazara Shia community”

Reporting the incident, Dawn reported, “Hazara Town is a locality populated mainly by the ethnic Hazara Shia minority which has been targeted by extremist militant groups”

The rest of the newspapers did not even use “Shia” in their reporting of the bombings. The opinion writers did not lag behind in denying or obfuscating the identity of the Shia victims. They either denied or censored the attacks. For instance, Raza Rumi, the granddaddy of Pakistan’s liberals wrote an article in which he dealt with Pakistan’s most pressing problem. According to Rumi, Pakistan’s problem is its faulty foreign policy, and not its internal problems. So not a word about the Shias killed in the past two days.

The rest of the papers did the same. No opinion or comment condemning the attacks on the Shias.  This is the state of affairs in Pakistan when it comes to the Shia genocide.

2 responses to “As Deobandis feast on Shia Muslims, the media and ‘civil’ society look away – Dr Abbas Zaidi”