Most of the jihadists groups in Pakistan follow the Deobandi sect of Islam, not the Salafist – Arif Jamal 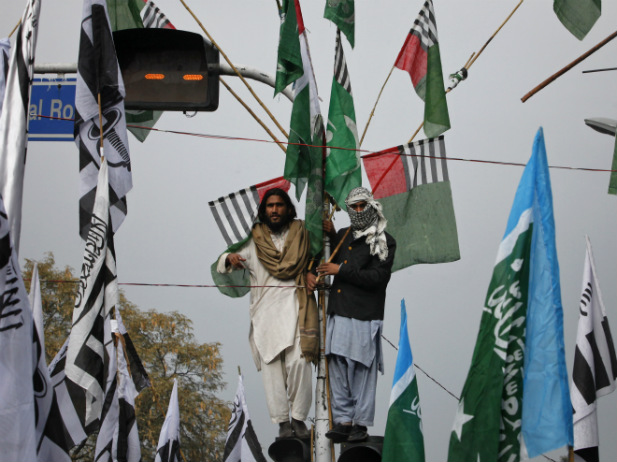 The United States already has its fair share of terrorist outfits to uproot and neutralize, and while the Pakistan-based Jamaat-ud-Dawa (JuD) may not be an immediate threat, it could in time emerge to be far deadlier than al Qaeda or the Islamic State, warns senior Pakistani journalist Arif Jamal in his latest book, Call for Transnational Jihad: Lashkar-e-Taiba (1985-2014). Jamal has been reporting on the jihadist outfit, which was little known outside of South Asia until the 2008 Mumbai attacks brought it international attention, for over two decades. The basis of his research is numerous interviews with JuD’s leader Hafiz Saeed and a plethora of internal doctrinal literature. I was a little skeptical of the magnitude of the organization that Jamal contends is quietly pushing to revive a global Islamic Caliphate. So, I caught up with the writer in Washington, D.C., where he is currently based, to talk to him about JuD’s expanding network of trusted allies outside of Pakistan. The following is an excerpt of that conversation, which has been edited and condensed.

Shah: After reading your book, I get the sense that there is very little understanding in the West of JuD, and its workings. Is that an accurate assessment?

Jamal: Yes, that would be correct to say. There is a lot of misreporting. Let me give you a few examples. Many Western experts, interested in JuD, conclude that its founder, Hafiz Saeed, taught engineering at a college in Pakistan and is himself an engineer. That is incorrect. He was only a professor of Islamic studies at the university. To give you a better idea, the U.S. State Department’s 2010 press release, which announced a bounty on Saeed and his brother-in-law, was replete with factual mistakes. The State Deptartment even got Saeed’s date of birth wrong, and this information is out there. You just need to look for it. While these might sound like insignificant errors, here is a more serious mistake many experts make: to use the names JuD and Lashkar-e-Taiba (LeT) interchangeably. For them, LeT is the main organization, and JuD is only its political wing. Wrong again. It is in fact JuD that is the central organization, and LeT is just one of its branches, which is responsible for waging jihad in India.

S: JuD has evolved and expanded its network in recent years. Would it be safe to say that while the world was busy with al Qaeda, JuD kept growing and has now metastasized into a formidable terrorist outfit, with an international presence?

J: JuD is a radical offshoot of Juhayman al-Otaybi’s Ikhwan, which launched a rebellion and seized Mecca in 1979. Consider that the first terrorist act in present times. Militants from several countries took part in that revolt. From the very beginning, JuD has had a global outlook; its ambitions are not restricted to India. Saeed and his affiliated militias have units in over a 100 countries. Dawa members have participated in all major jihads around the world, including Afghanistan, Bosnia, Chechnya, India, the Philippines, and Tajikistan. This is not something that al Qaeda did. JuD also has sleeper cells in most of the United Kingdom; in fact, their Europe headquarters is in Paris, and run by a Pakistani. Even with such an outstretched and global network, the largest training camp is still in Pakistan.

S: So are you saying JuD could be the next al Qaeda, or an even bigger threat to world peace?

J: No, it will not be the next al Qaeda. Al Qaeda is a far smaller organization. Even in its heydays, it only had a membership of approximately 5,000 people. On the other hand, JuD has at least half a million men under arms. And let’s not treat them as two separate entities. In recent years, al Qaeda has moved closer to JuD. Take [al Qaeda leader] Ayman al-Zawahiri’s statement a few days back of operational expansion by setting up a new branch in the Indian subcontinent. In his 55-minute video, he promised to rally Muslims in Burma [Myanmar], India, and Bangladesh. Now in these countries, JuD already has extensive networks. Also, there is well-documented evidence that Osama bin Laden was in contact with Saeed before his death. One reason could be that al Qaeda adopted Otaybi’s ideology — Salafism — in 1996. There are only two heirs to this sect of Islam in the militant world, al Qaeda and JuD. When Pakistani authorities were rounding up al-Qaeda-linked Arabs after 9/11, most of them were found in the homes of JuD members.

S: And what, if any, is the nexus between JuD and other terrorists groups in Pakistan?

J: In the last two years, the Tehreek-e-Taliban Pakistan’s chief, Mullah Maulana Fazlullah, has started to espouse Saeed, ideologically. Remember that most of the jihadists groups in Pakistan follow the Deobandi sect of Islam, not the Salafist, which is the faith that rules the behavior of JuD. But they can become JuD’s natural allies when the latter turns against the Pakistani state. Iraq and Syria are a case in point. Here several divergent groups amalgamated under the banner of the Islamic State. So if JuD decides to set up a caliphate in South Asia, many outfits will support this ominous development.

But let’s talk about Fazlullah again. He is not an ardent follower of Deobandi Islam, and has drifted closer to Salafism over the years. His father-in-law actually trained in a JuD camp in Afghanistan. One more thing, to further explain the imprint of JuD in the way modern terrorists wage war. Dawa, in fact, revived the tradition of beheading in the 1980s during the Afghan War. One of their commanders is quoted, in the group’s literature, as having severed the heads of over a 100 Soviet soldiers. In 1995, LeT militants beheaded their first Indian solider. That was also the year when I first came into contact with this group. On route from Islamabad to Lahore, our bus stopped outside the headquarters of JuD, where an annual congregation was ongoing. Curiosity got the best of me, so I walked into the gathering. And to my shock, I noticed a human head on a spear in the midst of the crowd. I was told that one of their commanders had beheaded an Indian army officer and brought his head back to display to the congregation. Many JuD publications have noted this event.

S: Here was one startling assertion in your book. You write that one reason the United States is of increasing interest to JuD is because one of its founding members was an American Muslim. What more can you tell us about him?

J: There is very little information available about this man. All I know is that he was an African American Muslim who fought during the Mecca rebellion. The interesting thing about him… actually what I have learned about him from JuD sources is that he was a very wealthy man and bankrolled Dawa in its initial stages. If he is still alive then, he should be living in the United States.

S: You write about JuD being a viable threat to Pakistan’s atomic energy installations. Could you explain how?

J: The threat is very real and imminent to Pakistan. If Saeed decides today that Pakistani authorities are legitimate targets, Pakistan will have a hard time putting up resistance, since JuD is not made up of a few thousand people, it has a vast operational outreach. Back in the 1980s, Saeed set up a student organization at the university where he was teaching. It was mostly comprised of engineering students. These students today have joined different professions in the government and private sector. Some have joined Pakistan’s Atomic Energy Commission. I can name a few of them. Visit any police station or government office and you are bound to run into men with an affiliation to JuD. Listen, Dawa’s members are not just terrorists waging jihad all the time, they are very well-entrenched into the society. In just one school, JuD can have up to 50,000 students. Imagine, 50,000 in just one school. When I used to speak to Dawa members, they said they wanted an organization that could eventually run a state.

S: How does JuD recruit?

J: It recruits through families. They have probably recruited upward to 100 babies already. Some people in Pakistan prefer to donate their children instead of money. These newborns are returned to the families, who are then told to make sure they are raised as JuD members. So now the group’s officials will be in touch with the families, continuously instructing them on how to raise their children, all the while working to bring the entire family into their fold. This is how they motivate people. There is a scripted act every time Saeed addresses a crowd. During the speech, a man will suddenly walk up to the stage and hand over his child, who will then of course be returned. I remember once asking Saeed who are these people who give him money. His reply was, “Those who give me their babies also give me money.”

S: What role, if any, can Saeed play in Afghanistan after military drawdown?

J: The Pakistani military is disillusioned with the Deobandi jihadist groups. These terrorists have turned against the state and are killing innocent Pakistanis. The rupture is final. There is no mutual trust even with those who are now in peace agreements with the government. My assessment is that Pakistan will attempt to replace the Afghan Taliban with the JuD. I can see Dawa becoming more and more active across the border.

S: One of the most startling assertions in The Call for Transnational Jihad, for me at least, is that JuD has been in possession of armed-drones since 1999, and may be close to getting its hands on chemical weapons. Why hasn’t it used them already?

J: Chemical weapons are not difficult to acquire. Remember they have hundreds of engineers and biologists amongst their ranks. I have seen the small drones at their premises in Punjab. The most surprising thing should be their capacity to possess nuclear arms. As for why they haven’t used it, it could be that they don’t think the time is right. Also, the media in Pakistan provides these groups with a conducive environment as well. The media there has always supported the jihad in Kashmir. After JuD rebranded itself as a charity, the Pakistan media has projected it continuously as a charity and not a terrorist group. The link between LeT and JuD is very clear. Anyone in the field of journalism understands that. Saeed is a regular on TV talk shows and no one dares probe him.

S: There is the Islamic State, a jihadi group in the Middle East, and then there is JuD in South Asia. Could there be a merger of the two terrorists groups for a global caliphate?

J: This is a possibility. Al-Qaeda has now been reduced to South Asia, after its split in the Middle East. The Islamic State has quite a few al Qaeda militants who share Otaybi’s ideology. My sources tell me that many Salafists are supporting the Islamic State as well as JuD. At some point they can cooperate, but they can also swing the other way and establish competing caliphates, or hope to. Both of them are brutal, and the Islamic State follows JuD’s tactic of beheading those it captures. It is too early for a conclusive argument, but you cannot rule this possibility.