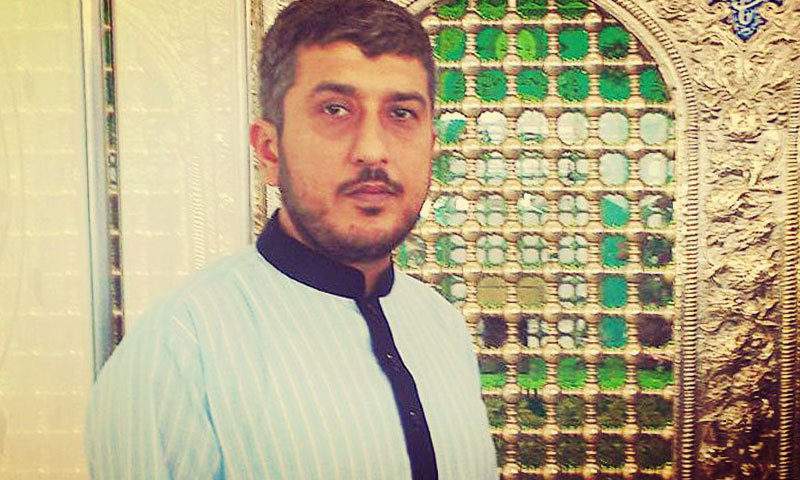 The following piece has been written by a close cousin of Ali Akbar Kumaili (son of Shia scholar Abbas Kumaili), who was shot dead in a sectarian attack in Karachi recently.

The night he was shot, I sat in the morgue next to him for hours.

Looking at him as he lay there motionless, wrapped in his kafan, was perhaps the saddest thing I have ever seen. The strongest man in our family, the man whom I saw lift a Corolla off the ground all by himself, lying lifeless right in front of me.

Ali was like my elder brother in just about everything.

From helping me draw a portrait of Quaid-e-Azam to fixing the car, my cousin was truly an artistic, fun loving, caring and one astoundingly brave person.

From reading in majaalis to setting up a sabeel in Muharram, to serving ‘Niaz’, he loved doing everything by himself, with his own hands whenever possible.

Now, as I sat there with his body, old memories began flooding in.

I recalled that I had told him how much I loved the swing at my school but would hardly ever get a turn. I remember him getting an old truck tyre shortly after, which he tied to the balcony above our patio to make a delightful swing which I enjoyed for years.

I once told him I wanted to buy a small motorbike because I love the sound motorcycles make. He said they were too dangerous. So instead, he used pieces of cardboard and fixed them on my bicycle’s mudflap such that when I paddled it made a motorcycle-ish sound.

We used to play cricket together. Once, I bought stumps and was very excited to have a real wicket set up at home instead of the usual stones-and-chair setup. He dug the cemented floor of our compound with his own hands and then filled it with sand so I could use the stumps.

He took me swimming and made me like Nihari just as much as he liked it.

On every Eid, I would try to avoid hugging him because he loved giving bear-hugs, squeezing the life out of all of us and then laughing at our reactions.

A few years back, Ali saved me from drowning, in the process almost drowning himself.

These last few years, whenever we sat together, he would discuss politics and would tell me about his socio-religious activities and the difficulties he faced.

He called me the day before he got shot, instructing me to be careful in general. I wish I would have advised him the same thing.

I wish I could get his bear-hug one last time and ask him who did this to him and why.

But for now, thank you Ali, for being such a sweet person, for giving us a happy childhood, for always being there for us.

We mourn him, who was the heart and soul of our house.

We mourn him, whose departure has orphaned hundreds of lives.

This brave man gave so much to the community, but as if that wasn’t enough, he gave his life too.