Home  »  Newspaper Articles   »   Islamic State: ‘US failure to look into Saudi role in 9/11 has helped Isis’ – by Patrick Cockburn 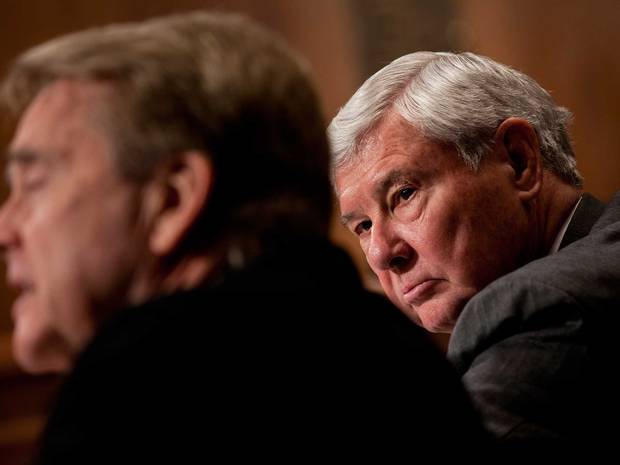 The rise of the Islamic State of Iraq and the Levant (Isis) has been aided by the continuing failure of the US Government to investigate the role of Saudi Arabia in the 9/11 attacks and its support of jihadi movements such as al-Qaeda in the years since, says former Senator Bob Graham, the co-chairman of the official inquiry into 9/11.

Senator Graham, who chaired the Senate Intelligence Committee, said that successive administrations in Washington had turned a blind eye to Saudi support for Wahabi/Deobandi extremists. He added: “I believe that the failure to shine a full light on Saudi actions and particularly its involvement in 9/11 has contributed to the Saudi ability to continue to engage in actions that are damaging to the US – and in particular their support for Isis.”

Senator Graham, a distinguished elder statesmen who was twice Democratic governor of Florida before spending 18 years in the US Senate, believes that ignoring what Saudi Arabia was doing and treating it as a reliable American ally contributed to the US intelligence services’ failure to identify Wahabi/Deobandi Isis as a rising power until after it captured Mosul on 10 June. He says that “one reason I think that our intelligence has been less than stellar” is that not enough attention was given to Saudi Arabia’s fostering of al-Qaeda-type jihadi movements, of which Isis is the most notorious and successful. So far the CIA and other intelligence services have faced little criticism in the US for their apparent failure to foresee the explosive expansion of Isis, which now controls an area larger than Great Britain in northern Iraq and eastern Syria.

Senator Graham’s criticism of the US policy towards Saudi Arabia is important because it comes amidst growing doubts in the US about the wisdom of President Barack Obama’s plan announced on Wednesday to look to the Gulf monarchs as crucial allies in the US campaign to contain and, if possible, push back Isis after its victories in Iraq and Syria during the summer.

Islamic State fighters commandeer an Iraqi forces armoured vehicle in Mosul, Iraq Under the plan, Saudi Arabia is to host a special training facility for “moderate” Syrian opposition which is to fight both Isis and the government of President Bashar al-Assad. A problem is that Saudi Arabia dislikes Isis today, whatever its role in its creation, but it gives priority to regime change in Damascus.

Senator Graham thinks it is wise to engage with Saudi Arabia because, despite Saudi denials, he says it has been “a central figure in financing Isis and extremist groups”. But he is cautious about success from the US point of view because of the Saudi monarchy’s long-term alliance with the Wahhabi clergy and its commitment to spread Wahhabism, the intolerant variant of Islam which denounces Shia as heretics and treats women as chattels under male control. The Senator says that Saudi Arabia not only gives support to Sunni communities worldwide “but the most extreme elements among the Sunni”.

The Saudi role in the 9/11 attacks on the World Trade Center in 2001 has long been public knowledge since 15 out of 19 of the hijackers were Saudis, and the leader of al-Qaeda, Osama bin Laden, was a member of the Saudi ruling elite. The 9/11 inquiry found that, for financing, al-Qaeda relied on a core group of private donors and charities in Saudi Arabia and the Gulf.

Despite the Saudi connections of the 9/11 conspirators, Saudi Arabia and its citizens were treated with extraordinary leniency in the wake of the attacks. Some 144 individuals, mostly from the Saudi aristocracy, were permitted to fly back to Saudi Arabia within days of the attacks without being questioned by the FBI. The influential Saudi ambassador Prince Bandar bin Sultan was pictured in cheerful conversation with President Bush on the White House balcony a few days after 9/11. Senator Graham recalls that “there were several incidents [in which US officials] were inexplicably solicitous to Saudis”. US officials who went to Saudi Arabia to investigate links to 9/11 found their Saudi counterparts to be persistently obstructive.

Prince Bandar bin Sultan Saudi obstructionism continued during the decade after 9/11: in 2007, Stuart Levey, the Under Secretary of the US Treasury in charge of monitoring and impeding the financing of terrorism, told ABC News that when it came to al-Qaeda, “if I could somehow snap my fingers and cut off the funding from one country, it would be Saudi Arabia”. He added that at that stage not one person identified by the US or the UN as funding terrorism had been prosecuted by the Saudis. Eight years after 9/11, the US Secretary of State, Hillary Clinton, wrote in a cable leaked by WikiLeaks that “Saudi Arabia remains a critical financial support base forWahabi/Deobandi  al-Qaeda, the Deobandi Taliban, Wahabi LeT [Lashkar-e-Taiba in Pakistan] and other terrorist groups.”

As al-Qaeda in Iraq began to reorganise and turn itself into Isis in the years after 2010, politicians and security officials in Baghdad were convinced of the complicity of Saudi Arabia and the other Gulf monarchies in funding jihadis in Iraq. They generally avoided public criticism of these states as allies of the US, but in March 2014 Iraqi Prime Minister Nouri al-Maliki identified Saudi Arabia and Qatar as the two countries “primarily responsible for the sectarian, terrorist and security crisis in Iraq”. He said that Riyadh and Doha were “buying weapons for the benefit of these terrorist organisations”. Mr Maliki had his own share of blame for persecuting the Sunni community in Iraq so it gave support to armed resistance by Isis, but Iraqi leaders all believed that the monarchs of the Gulf were bankrolling Sunni opposition in Iraq and would never accept a Shia-dominated government.

Osama bin Laden The most striking example of Washington’s willingness to protect the Kingdom over complicity in 9/11 is the 28 pages of the official inquiry that were censored and have yet to be published. Senator Graham is not allowed to reveal what is in the chapter that was redacted, but other sources say that they are about connections between Saudi government officials and the 9/11 attacks. Anthony Summers and Robbyn Swan, in their book The Eleventh Day: The Full Story of 9/11, quote a senior American official, who saw the 28 pages before they were excised, apparently on the initiative of President Bush, as saying: “If the 28 pages were to be made public, I have no question that the entire relationship with Saudi Arabia would change overnight.”

Senator Graham has long campaigned to have the 28 pages of the 9/11 inquiry and other documents released. He says, knowing their content, that there is no national security justification for keeping them a secret 13 years after 9/11. He says that some government agencies, notably the FBI, have a motive in keeping information from the public about “their actions and their competence at the time of 9/11”. In Sarasota, Florida, the FBI initially denied having any documents relating to hijackers who were based there but has now handed over 80,000 pages that might be relevant under the Freedom of Information Act, according to Tom Julin, the Miami-based attorney handling the FoI application.

The Twin Towers sparked a series of global events Asked why the US government has been so eager since 2001 to cover up for the Saudis, Senator Graham says that one explanation is the long-term US strategic alliance with Saudi Arabia, going back to the Second World War. There is also the close personal relationship between the Bush family and the Kingdom. But what he finds more difficult to explain is why the “policy of covering up Saudi involvement [in 9/11] persisted under the Obama administration”. Though Mr Obama had pledged to the families of the 9/11 victims during the 2008 presidential election campaign to release the 28 censored pages, it has failed to do so six years later.

Senator Graham does not suggest that the Saudis are directly running Isis, but that their support for Sunni extremists in Iraq and Syria opened the door to jihadis including Isis. Similar points were made by Sir Richard Dearlove, the former head of the British Secret Intelligence Service, and MI6, who said in a lecture at the Royal United Services Institute in London in July that the Saudi government is “deeply attracted towards any militancy which effectively challenges Shiadom”. He said that rulers of the Kingdom tended to oppose jihadis at home as enemies of the House of Saud, but promote them abroad in the interests of Saudi foreign policy. Anti-Shi’ism has always been at the centre of the Saudi world view, and he quoted Prince Bandar, the ambassador in Washington at the time of 9/11 and later head of Saudi intelligence,  as saying to him: “The time is not far off in the Middle East, Richard, when it will be literally ‘God help the Shia’. More than a billion Sunni have simply had enough of them.”

The jihadi flag of the Wahabi/Deobandi Islamic State (IS) In allying itself with Saudi Arabia, the US automatically plugs itself into an anti-Shia agenda and limits its ability to monitor and take action against Wahabi/Deobandi jihadis who are promoted by Riyadh. In Syria this has led to parts of a jihadi-dominated military opposition being relabelled as “moderate”. President Obama intends to support this group, who scarcely exist on the map, to fight both Isis and the Assad government.

Senator Graham maintains that there is a “dark side” to Saudi Arabia exemplified by 9/11 and its aftermath that the American public need to know about and which has hitherto been concealed. The US and other Western governments have yet to explain why their “war on terror” has so demonstrably failed with the rise of Wahabi/Deobandi Isis, but tolerance of Saudi complicity in 9/11 will surely be part of the answer.