Home  »  Newspaper Articles   »   Al-Qaeda in the Indian Subcontinent – an imminent threat to India? – by Michael Duffy 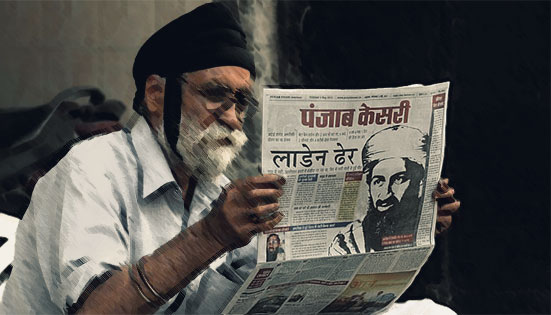 The vulnerable Muslims of Burma, Bangladesh, Assam and Gujarat and Ahmadabad and Kashmir, have a new saviour, one that has been two years in the making, Al-Qaeda chief Ayman al-Zawahiri’s recent announcement of a new affiliate Al-Qaeda in the Indian Subcontinent (AQIS) came with little fanfare, but its implications, particularly for India, are disconcerting.

Reportedly comprised of various mujahedeen from the Indian subcontinent it’s aims, as expected, are similar to those of its parent organisation, to wage Jihad against America and the system of infidels who grew up under its auspices, to liberate occupied Muslim lands and the oppressed Muslims of the Indian subcontinent and also, in an apparent snub Abu Bakr al-Baghdadi’s Islamic State (IS), to create a pan-Islamic caliphate.

The announcement of this new group cannot be viewed separately from the struggle between Al-Qaeda and the Islamic State (IS) for pre-eminence in the jihadist sphere. Al-Qaeda has struggled to maintain legitimacy amongst young Muslims, who now see the Islamic State as the authority in pan-Islamic jihad. This shift in perceptions, facilitated by the establishment of an Islamic Caliphate and buttressed by an impressive social media presence has made it the de-facto choice for foreign jihadist recruits.

Recruits that would once flock to Afghanistan and Pakistan are now looking to Syria, and the IS recruitment drive is being felt on the Indian subcontinent. One of the first groups to pledge allegiance to the then newly formed Islamic State was Tehreek-e-Khilafat one of the various sub-groups operating under the banner of Deobandi Tehrik-i-Taliban Pakistan (TTP), commonly known as the Pakistani Taliban, declaring ‘Sheikh Abu Bakr al-Baghdadi shall consider Deobandi Tehreek-e-Khilafat and Jihad mujahideen fighters of Pakistan as one of the arrows among his arrows which he has kept for his bow’ and ‘to see the expansion of Islamic State boundaries toward the Sub¬Continent and Khurasan region in order to hoist the flag of Islamic State here’ Although TTP is notoriously atomized, this pledge of allegiance from a Pakistani based group would have come as a shock to senior Al-Qaeda leadership.

Furthermore IS has also been actively recruiting in Pakistan booklets entitled Wahabi/Deobandi Dawlat-e-Islamia (Islamic State) have been circulating in Peshawar, along with pro-IS graffiti, the biggest coup for IS on the subcontinent though, was the recruitment of four Indian Muslims from the outskirts of Mumbai, who purportedly travelled to Iraq to join the group after being recruited online .Indian administrated Kashmir has also saw a rise of pro-IS sentiment amongst youths and in the southern state of Tamil Nadu two men were arrested when a photograph depicting a large group of Indian Muslims in ISIS T-shirts on social media went viral.

India’s large, relatively marginalized Muslim population on paper has all the characteristics of a group which would be susceptible to fundamentalist persuasion. Indian Muslims are not afforded the same opportunities as their Hindu counterpart and are amongst the poorest groups in India, they comprise approximately 14% of the population yet are vastly underrepresented in parliament, security services and the judiciary; they are hamstrung in their access to housing and are far more likely to be in informal employment, but regardless of this Islamic militancy has not established a foothold, the majority of India’s vast Muslim populace practice the moderate Sufi Islam, and view themselves as Indian first, Muslim second.

Be that as it may, they are not immune to radicalization, past events such as the destruction of the Babri Masjid mosque in Ayodhya in 1992 by Hindu mobs caused outrage amongst Muslim communities and resulting in communal violence which left more than 2000 dead, in 2002 anti-Muslim rioting in Gujarat killed more than 1000 people, mainly Muslims, and in 2012, communal violence against settlers in Assam displaced over 400,000 Muslims, this, along with anger over the maltreatment of Rohingya in Myanmar led to riots across India. These events, particularly the destruction Babri Masjid Mosque are oft cited as reasons for terror attacks perpetrated by the Indian Mujahedeen (IM)

Furthermore, the recent election of Hindu nationalist Narendra Modi is controversial amongst Indian Muslims; Modi was Chief Minister of Gujarat during the riots in 2002 and has been accused by Muslims of failing to prevent the violence and his subsequent lack of remorse. Before he was elected to office Modi was supposedly a target for IM operatives. His election will have only served to increase the tension and mistrust amongst Hindu’s and Muslims in the country and could serve as a window of opportunity for recruitment purposes.

AQIS will no doubt attempt to recruit fighters in India, Bangladesh and Myanmar, and whilst there may be successes in recruitment from the latter two, particularly Myanmar where the Rohingya are suffering systematic genocide, India, as the British used to say, is the jewel in the crown.

AQIS emir Umar Assim a member of both Al-Qaeda and TTP has previously stated his desire to increase recruitment in India, in a video seemingly acknowledging Indian Muslims disinclination to embrace fundamentalism titled ‘Why is there no storm in your ocean’ he asks ‘Why is it that the Muslims of India are totally absent from the fields of jihad?’ urging Indian Muslims to ‘Rise! Awaken! Participate in this global jihad to give a final push to the collapsing edifice of America.’

This focus on recruitment however adumbrates a more sinister motive behind the formation of AQIS. Al-Qaeda’s operational capacity to strike ‘western’ targets has atrophied with each drone strike, but there is one near-enemy that is seen as a collaborator of the West and harmful to Muslims and Muslim interests, India.

Large scale attacks against India have generally been orchestrated and perpetrated by Pakistani-based terror organisations; specifically those operating in the Indian administrated Jammu and Kashmir State with Wahabi Lashkar-e-Tayiba (LeT) and Deobandi Jaysh-e-Mohammad (JeM) both infamously carrying out the 2001 Indian Parliament attacks and the former carrying out the deplorable 2008 Mumbai attacks which killed 164 people. IM have also carried out multiple bomb attacks inside India and is alleged to have support operations by LeT.

The connection of these groups and others to Al-Qaeda is noteworthy in determining the composition and thus operational capacity of AQIS. It is likely that AQIS has incorporated elements of Harkat-ul Jihad al Islami Bangladesh (HuJI-B) a Bangladeshi terror group inspired by Osama Bin Laden’s International Islamic Force (IIF) and known to have operational network in India having carried out several attacks on Indian soil. Pakistani-based Harkat-ul-Mujahideen (HuM) and the Indian Mujahedeen are also likely constituents. The networks of these groups will be of great concern to India with the formation of AQIS increasing the prospect of a terror attack.

AQIS’s relationship with LeT though is likely the biggest concern of Indian authorities, long seen as the sword of the Pakistan’s Inter-Services Intelligence (ISI) wielded against India. LeT’s ability to strike India is proven. LeT’s progressive move to a more pan-Islamic ideology hints at a close relationship between the two groups, and perhaps points to future co-operation between the two groups in similar fashion to Let and JeM in the 2001 Parliament attacks.

The current generation of potential jihadist fighter’s have only known Al-Qaeda to be on the defensive, ever since the death of Osama bin Laden, AQ’s leadership has been out of sight and out of mind, whilst IS’s rapid advance in Syria and Iraq has generated endless headlines and endless recruits. In its battle for supremacy with IS, Al-Qaeda does not have much room for manoeuvre, the options for it to change how it’s perceived are minimal. Attacks against enemies of Islam, in this case India, is one option that can alter this perception, a large-scale Mumbai style attack on Indian soil, could be the shot in the arm Al-Qaeda needs to boost its profile amongst a new generation of jihadist fighters, and this attack, in all likelihood, is imminent.