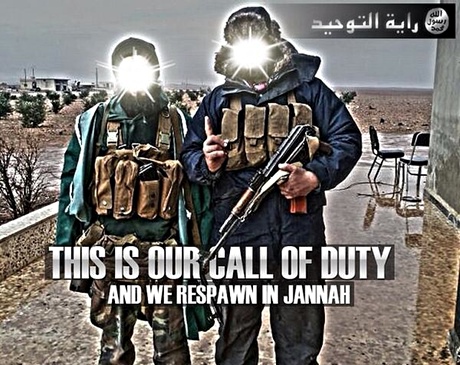 The Clanging of the Swords IV sounds like the latest in a series of Hollywood action movies. It looks like one, too. A feature-length film released online a few weeks ago, Swords IV includes a slow-motion bomb sequence reminiscent of The Hurt Locker, aerial footage that nods to Zero Dark Thirty, and scenes filmed through the crosshairs of a sniper rifle that wouldn’t look out of place in a first-person shoot-’em-up.

But Hollywood this is not. Perhaps surprisingly, The Clanging of the Swords IV is the work of the Islamic State in Iraq and the Levant (Isis), the extremist jihadist group that has led the insurgency against the authoritarian Iraqi government in recent weeks, and which runs parts of northern Syria.

Isis want the people living in the lands they now control to return to the ultraconservative traditions that – they claim – the earliest Muslims lived by. Yet this regressive goal is accompanied by a hypermodern propaganda machine that sees Isis’s sadistic attacks promoted by a slick social media operation, a specially designed app – and well-made videos like The Clanging of the Swords IV.

When Isis stormed Iraq‘s second city of Mosul earlier this month, analysts say their propaganda made the fighting easier. In wars gone by, advancing armies smoothed their path with missiles. Isis did it with tweets and a movie. 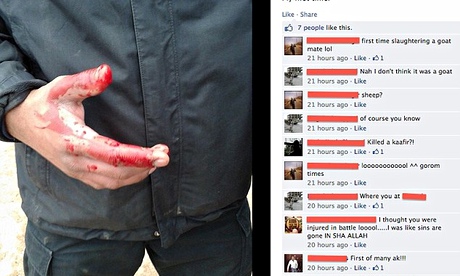 Thousands of their Twitter followers installed an app – called the Dawn of Glad Tidings – that allows Isis to use their accounts to send out centrally written updates. Released simultaneously, the messages swamp social media, giving Isis a far larger online reach than their own accounts would otherwise allow. The Dawn app pumps out news of Isis advances, gory images, or frightening videos like Swords IV – creating the impression of a rampant and unstoppable force.

And it works, Iraqis say. When Isis stormed Mosul, Iraqi soldiers fled their posts, apparently aware that they would face a gruesome fate if they were captured while on duty.

“The video was a message to Isis’s enemies,” says Abu Bakr al-Janabi, an Iraqi Isis supporter who moved to the EU recently because of the ban on social media sites in Iraq. He claims to have knowledge of the group’s media operations. “It’s Isis saying to them: look what will happen to you if you cross our path. And it actually worked: a lot of soldiers deserted once they saw the black banners of Isis.”

Zaid al-Ali, author of The Struggle for Iraq’s Future, a book about contemporary Iraq published earlier this year, says it isn’t clear how many people actually follow Isis on Twitter or Facebook. “But the general impression Isis tries to convey of itself, this very violent and determined force making huge advances in Syria and Iraq – that trickles through to the local population,” says al-Ali. “The image that they convey of themselves has convinced people in many parts of the country, and that [was] clearly a factor in encouraging people to leave their posts as Isis was advancing.”

Isis and their followers tried a similar approach with Baghdad. As fears rose of an Isis assault on the Iraqi capital, Isis supporters stoked tensions by releasing a slick Photoshopped image of an Isis militant in Baghdad, overlaid with the words: “Baghdad, we are coming.” As JM Berger, an expert on extremism, wrote in The Atlantic: “The volume of these tweets was enough to make any search for ‘Baghdad’ on Twitter generate the image among its first results, which is certainly one means of intimidating the city’s residents.”

In fact, Isis’s use of social media is so slick that it has made the group seem more powerful than it is. Coverage of its menacing online identity may have both obscured the role other Sunni groups have played in Iraq’s insurgency – and made opponents wrongly assume that Isis has all of Iraq within its grasp.

“The fear about ISIS storming the capital is borne out of their social media campaign, not reality,” says the Guardian’s Middle East correspondent, Martin Chulov, who is currently stationed in Baghdad. “They don’t have the manpower to do that.”

Isis’s media output is not all barbaric. Much of its propaganda is frightening: Swords IV showed Isis’s captives literally digging their own graves, while on Twitter Isis has posted images of a cold-blooded massacre of Iraqi soldiers in Tikrit, Saddam Hussein’s hometown. But other Isis messaging focuses on its social activity – photos of supporters bringing in the harvest, or delivering food shipments. Members recently distributed an earnest English-language newsletter – a well-designed PDF since deleted from the internet – documenting the often dull details of their community work.

If Isis’s work seems planned and professional, that’s because it is, says Abu Bakr al-Janabi, the Isis supporter in Iraq. According to al-Janabi, Isis runs centralised Twitter accounts that (when not banned by Twitter’s management) tweet official statements and news updates. Then there are provincial accounts “for each province in which Isis is present – which publish a live feed about [local] Isis operations.” 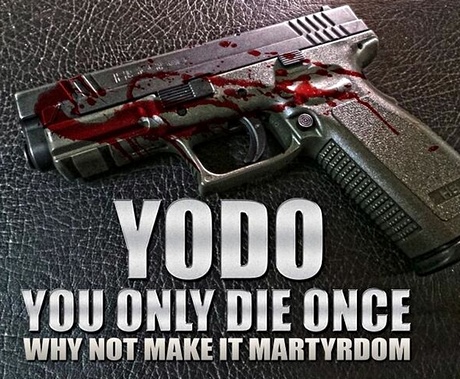 The Dawn app was built by members of Isis’s Palestinian affiliate, in consultation with leaders in Iraq and Syria, says al-Janabi. And the wider group also harbours trained designers. “There are a lot of people in Isis who are good at Adobe applications – InDesign, Photoshop, you name it. There are people who have had a professional career in graphic design, and [others] who are self-learnt.”

Swords IV was made by professional film-makers, al-Janabi also claims – and independent observers think he might be right. “The official Isis operation released photos of them filming – and it’s all on equipment that we use at Vice,” says Vice journalist Aris Roussinos, who reports extensively on both jihadists and their online activity (warning: contains graphic images). “It’s high-quality equipment that they’re actually very technically skilled at using, in a way that the other rebels aren’t. They’re also really good at Photoshop.”

But while parts of Isis’s messaging are centralised and run by professionals, its online strength is also derived from the participation of a large swath of independent actors. First, there is Isis’s online fanclub: thousands of Isis supporters with no official role within the group who boost its brand by retweeting its hashtags, and translating its Arabic members’ messages for potential sympathisers in the west. Many of them make Photoshopped slogans to promote the group – in fact, many of Isis’s slick viral adverts come about this way, claims al-Janabi. “The graphic design is mostly independent and done by individuals. For example, that picture that said ‘Baghdad, we are coming’ – nobody asked [its creators] to do it, but they did it anyway.”

And then there are the Isis militants themselves. They tweet about their experiences in the field, and publish their own private pictures – sometimes gory images of severed heads, sometimes mundane snaps of food and cats – often to appreciative audiences.

“My first time!” writes one British jihadi underneath a Facebook photograph of his bloodied hand – apparently after killing an opponent. “First of many,” responds one friend. “Mabrook,” says another: congratulations.

Others use their Instagram accounts to post well-polished pro-jihad slogans that are aimed at, and seemingly appreciated by, a western viewership. “You only die once,” reads one image that attracted 72 likes on Instagram. “Why not make it martyrdom?”

It is this kind of social media usage that points to the third goal of Isis’s propaganda war. While Isis’s Twitter presence first and foremost serves to frighten its enemies in Iraq and Syria, and to inform its members there, it may also help Isis expand its brand among jihadis outside of the Middle East. Nominally an offshoot of al-Qaida, Isis has been disowned by its parent organisation. As a result, it is now in active competition with al-Qaida’s approved affiliate in Syria, Jabhat al-Nusra, as well as al-Qaida franchises across the world.

Part of the purpose of Isis’s social media activity “is definitely to scare people,” says Aymenn Al-Tamimi, a fellow at the Middle East Forum, a US think-tank. “But also it’s to give Isis greater prominence in wider media coverage. It becomes a kind of recruitment tool in the competition with al-Qaida in terms of leading the global jihad brand, and of winning the support of jihadis worldwide. In some ways they’ve won the battle: most of the foreign fighters who go to Syria join Isis. But around the world, it hasn’t been definitively won one way or the other. Ansar al-Sharia in Tunisia and Libya tend to be pro-Isis. But then you have the al-Qaida affiliates in Somalia which are clearly siding with al-Qaida.”

Isis is by no means the only jihadist group that uses the internet to its advantage. Jabhat al-Nusra also has a network of provincial tweeters, apparently inspired by Isis. An al-Qaida affiliate in Yemen recently released a video of their actions that they edited to seem like a first-person shooting game. In Egypt, the dominant terrorist threat – the al-Qaida-linked Ansar Beit al-Maqdis (ABM) – regularly release videos explaining how they carried out certain attacks, and their output is occasionally tinged with a sense of humour. When Egypt’s police claimed to have killed an ABM leader this year, the group quickly released a photograph of the allegedly dead man reading a report about his assassination.

But analysts reckon no other group has as sophisticated a grasp of social media as Isis. Members of one of Isis’s main Sunni rivals in Iraq – the Ba’ath party-linked Naqshbandi – are more likely to upload their leaders’ speeches to YouTube, “and I don’t think anybody pays any attention to that stuff”, says Zaid al-Ali, the author. Over the border in Syria, Jabhat al-Nusra has a more nuanced approach, and may even have similar numbers of online supporters. But when JM Berger analysed their respective performances in February, he discovered that Isis-linked hashtags received up to four times as many mentions as those promoting Jabhat al-Nusra.

“Jabhat al-Nusra have been outclassed and outcompeted by Isis on every level – on the battlefield, and in the battle of media operations,” concludes Vice’s Aris Roussinos. “Either they’ve got fewer resources – or they’re less in tune with the modern world in a way that Isis doesn’t seem to be.”