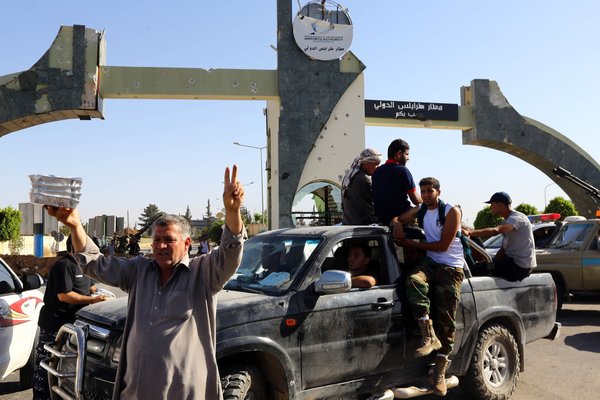 CAIRO — Twice in the last seven days, Egypt and the United Arab Emirates have secretly launched airstrikes against Islamist-allied militias battling for control of Tripoli, Libya, four senior American officials said, in a major escalation of a regional power struggle set off by Arab Spring revolts.

The United States, the officials said, was caught by surprise: Egypt and the Emirates, both close allies and military partners, acted without informing Washington, leaving the Obama administration on the sidelines. Egyptian officials explicitly denied to American diplomats that their military played any role in the operation, the officials said, in what appeared a new blow to already strained relations between Washington and Cairo.

The strikes in Tripoli are another salvo in a power struggle defined by Arab autocrats battling Islamist movements seeking to overturn the old order. Since the military ouster of the Islamist president in Egypt last year, the new government and its backers in Saudi Arabia and the United Arab Emirates have launched a campaign across the region — in the news media, in politics and diplomacy, and by arming local proxies — to roll back what they see as an existential threat to their authority posed by Islamist groups like the Muslim Brotherhood.

Arrayed against them and backing the Islamists are the rival states of Turkey and Qatar.

American officials said the Egyptians and the Emiratis had teamed up against an Islamist target inside Libya at least once before. In recent months, the officials said, teams of “special forces” operating out of Egypt but possibly composed primarily of Emiratis had also successfully destroyed an Islamist camp near the eastern Libyan city of Derna, an extremist stronghold.

Several officials said in recent days that United States diplomats were fuming about the airstrikes, believing the intervention could further inflame the Libyan conflict as the United Nations and Western powers are seeking to broker a peaceful resolution. Officials said the government of Qatar has already provided weapons and support to the Islamist-aligned forces inside Libya, so the new strikes represent a shift from a battle of proxies to direct involvement. It could also set off an arms race.

“We don’t see this as constructive at all,” said one senior American official.

The strikes have also, so far, proved counterproductive. Islamist-aligned militias fighting for control of Tripoli successfully seized its main airport just hours after they were hit with the second round of strikes.

“In every arena — in Syria, Iraq, Gaza, Libya, even what happened in Egypt — this regional polarization, with Saudi Arabia and the United Arab Emirates, or U.A.E., on one side and Qatar and Turkey on the other, has proved to be a gigantic impediment to international efforts to resolve any of these crisis,” said Michele Dunne, a senior associate at the Carnegie Endowment for International Peace and a former Middle East specialist at the State Department.

Egypt’s role, the American officials said, was to provide bases for the launch of the strikes. The Egyptian president, Abdel-Fattah el-Sisi, and other officials have issued vigorous-sounding but carefully worded public statements denying any direct action by Egyptian forces in Libya.

In private, the officials said, the Egyptian denials had been more sweeping.

The officials said the U.A.E. — which boasts one of the most effective air forces in the Arab world, thanks to American equipment and training — provided the pilots, warplanes and aerial refueling planes necessary for the fighters to bomb Tripoli out of bases in Egypt. It was unclear if the planes or munitions were American-made.

The U.A.E. has not commented directly on the strikes but came close to denying a role. On Monday, an Emirati state newspaper printed a statement from Anwar Gargash, minister of state for foreign affairs, calling any claims about an Emirati role in the attacks “a diversion” from the Libyans’ desire for “stability” and rejection of the Islamists. The allegations, he said, came from a group that “wanted to use the cloak of religion to achieve its political objectives” and “the people discovered its lies and failures.”

The U.A.E. was once considered a sidekick to Saudi Arabia, a regional heavyweight and the dominant power among the Arab monarchies of the Persian Gulf. The Saudi rulers, who draw their own legitimacy from a puritanical understanding of Islam, have long feared the threat of other religious political movements, especially the well-organized and widespread Muslim Brotherhood.

But Western diplomats in the region say the U.A.E. is now far more assertive and aggressive than even the Saudis about the need to eradicate Islamist movements around the region, perhaps because the Emirati rulers perceive a greater domestic threat.

The issue has caused a rare schism among the Arab monarchies of the gulf because Qatar has taken the opposite tack. In contrast to its neighbors, it has welcomed Islamist expatriates to its capital, Doha, and supported their factions around the region, including in Libya.

During the uprising against Col. Muammar el-Qaddafi in Libya three years ago, Qatar and the U.A.E. both played active roles, but each favored different clients among the rebels. While Qatar backed certain Islamists, the U.A.E. favored certain tribal or regional militias, including the militias from the Western mountain town of Zintan, said Frederic Wehrey, another associate at the Carnegie Endowment who specializes in Libya and the Persian Gulf.

It doesn’t surprise me that the State Department “doesn’t know anything about this development”. It’s ignorance is quite believable. Under…

When the U.S. was considered the most powerful nation in the world, it helped keep the peace. With Obama’s failed foreign policies we now…

The “proxy competition” between the two gulf states in Libya, he said, goes back to 2011.

Now it has extended to backing different sides in what threatens to become a civil war between rival coalitions of Libyan cities, tribes and militias. Although the ideological lines are blurry, the U.A.E. has backed its Zintani clients in what they describe as a battle against Islamist extremists. Qatar, its Islamist clients and loosely allied regional or tribal groups from the coastal city of Misurata have squared off from the other side; most insist that their fight has nothing to do with political Islam and seek to prevent an Egyptian-style “counterrevolution.”

The first strikes occurred before dawn a week ago, hitting positions in Tripoli controlled by militias on the side of the Islamists. The bombs blew up a small weapons depot, among other targets, and local authorities said they killed six people.

A second set of airstrikes took place south of Tripoli in the early hours on Saturday. The Islamist-allied militias were posed to capture the airport from Zintani militias allied with the U.A.E. who had controlled it since 2011, and the strikes may have been intended to slow the advance.

Striking again before dawn, jets bombed rocket launchers, military vehicles and a warehouse all controlled by Islamist-allied militia. At least a dozen people were killed, local authorities said. But within hours the Islamist-aligned forces had nonetheless taken the airport.

Responsibility for the airstrikes was initially a mystery. In both cases, anti-Islamist forces based in eastern Libya under a renegade former general, Khalifa Heftir, sought to claim responsibility. But the strikes, at night and from a long distance, were beyond the known capabilities of General Heftir’s forces.

The Islamist-allied militias, allied under the banner Libya Dawn, were quick to suspect Egypt and the U.A.E. But they offered no evidence or details.

American officials said after the first strike that signs pointed to the Emiratis. But some American officials found it hard to believe that the U.A.E. would risk a regional backlash. It was unclear how U.A.E. fighters could reach Tripoli without a base in the region, and Egypt denied any role.

On Monday, however, American officials said the second set of strikes over the weekend had provided enough evidence to conclude that the Emirates had carried out the strikes and even supplied the refueling ships necessary for fighters to reach Tripoli from Egypt.

Asked about an earlier version of this report posted on The New York Times website, a State Department spokesman declined to comment. “I’m not in a position to provide any additional information on these strikes,” the spokeswoman, Jen Psaki, told reporters at a State Department briefing.

Correction: August 25, 2014
An earlier version of this article misidentified the country where Egyptian and Emirates forces had previously teamed up to strike against Islamist targets, according to American officials. It was Libya, not Egypt.Source: