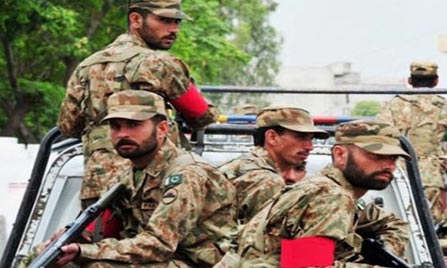 LAHORE: The army has conveyed a ‘loud and clear’ message to the government that it would not resort to the extreme measure of shooting down the fellow countrymen in ‘any circumstances’ for it is a national army with the task assigned to defend the nation against any threat from within and outside, The News has learnt.

The army, as a disciplined institution, has made it clear to PM Nawaz Sharif that it would defend the national landmarks as far as possiblewith an objective to avoid bloodshed. However, it will not get involved in the ongoing political standoff which, it is learnt, it believes is the domain of politicians.

Sources in the government have revealed the Friday’s statement of the PM on the floor of the House vis-à-vis the role of Chief of the Army Staff (COAS) General Raheel Sharif in brokering some sort of negotiated solution to the existing political deadlock has not gelled well with the military quarters. To them, the PM has compromised the COAS’ status all along by spreading disinformation at the prestigious forum at a very crucial juncture.

It was further learnt the PM had initially requested the services of the armed forces (under Article 245 of the Constitution) in handling the participants of the two long marches in Islamabad. The COAS even went to the extent of owning the decision in the following days. Similarly, it was learnt, the COAS came to the rescue of the government after repeated requests by Punjab CM Shahbaz Sharif and Interior Minister Ch Nisar Ali Khan followed by a series of letters from the PM’s Press Secretary Mohiuddin Wani to the GHQ for ending the political imbroglio. To top it all, it was learnt, PM Nawaz Sharif asked the COAS, in a one-on-one meeting at Islamabad on Thursday to ‘facilitate’ the government for resolving the issue. The word ‘facilitate’ is of great significance for the armed forces which believe it implies a cold resolution of the crisis rather than some kind of gesture from the PM, suggesting the use of force.

The COAS took the risk of mediation with an understanding the PM wished to use the ‘goodwill’ of his office with an intent to defuse the hostility on all sides of the political divide. Not for a moment the COAS thought the PM’s notion reflected the use of force for the word ‘facilitate’ didn’t have any such connotations. On the other hand, the sources in the government believed, the PM’s move included all possible measures for ending the standoff. Since the PM assigned this task to the COAS in person, it was generally considered among the armed forces the COAS was given the mandate to see where a negotiated common ground could be found, wherein all parties to the conflict would be ready to give or take for breaking the deadlock, which had already taken its toll on the working of the government, besides leaving a nasty impact on the economy.

In this scenario, the COAS went beyond his jurisdiction, thinking Imran Khan, Tahirul Qadri and the PM would honour and accept the outcome of parleys. Once some sort of consensus is reached through this mediation, the leaders would thus sit and formalise the decision. The use of force was out of the question all along as far as the military is concerned. It was, perhaps, this understanding among the military that made the COAS to accept the task.

While, on the other hand, the government circles, including a PML-N stalwart, were of the view that the PM’s meeting with the COAS and the consequent activism on the part of the army chief included harsh handling of the issue if the stalemate persisted i.e. if Imran Khan and Tahirul Qadri did not step back from their demand of PM Nawaz Sharif’s resignation. Sources in the government said it was hard to comprehend where things slipped out of hands when all was said and done. What made the PM to give such a statement in less than 24 hours of the initiative taken by the COAS in spite of the fact the latter was engaged by Mian Nawaz Sharif himself. The PML-N stalwart thinks the mediator might have asked the PM to surrender some ground, which might have been a non-negotiable domain.

The PM’s overture, it is learnt, has embarrassed the COAS, especially in the backdrop of already existing dissent in the military hierarchy over the issue. It was further learnt the military has passed on its reservations to the government with a clear message to manage the problem on its own through the law enforcers, police and Rangers, at its disposal. However, the military would continue to hold its position for protecting important buildings and the Diplomatic Enclave. This doesn’t mean the military would deviate from its constitutional obligations.

The government quarters explained that harsh measures suggested could include assembling the police, Rangers and soldiers in triple the strength of the protesters, pinning down the agitators with rubber bullets and teargas, and then shoving them into buses and trucks to transport them out of the capital to different remote areas.

The government sources said the PM considered it appropriate to involve the army chief as his two rivals had already been hinting at the army by using the word “umpire” and also because the army had already been called in under Article 245. However, they added, the PM had to face fuss and criticism over the use of words — mediation, guarantor or facilitation, etc. They said the PM could not speak more openly in the National Assembly and faced even more criticism after his address.