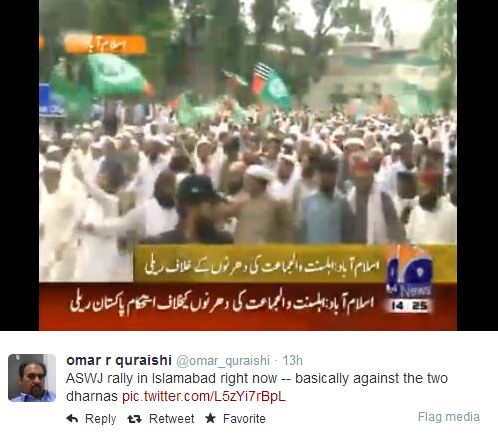 The last thing we need right now is sectarian elements coming out in opposition to PAT-led Inquilab March under the pretext of support for democracy and the constitution. Tahir-ul-Qadri, who belongs to the majority Barelvi sect, is joined by the Shia Majlis-e-Wahdatul Muslameen (MWM) and the Sunni Ittehad Council (SIC) for the ongoing sit-in in Islamabad. Another uniting factor for these three has been their clear and outspoken opposition to the Pakistani Taliban and terrorism. On the other hand, we have the Deobandi sect, which has historically enjoyed patronage by the country’s security establishment as well as Saudi Arabia.

Its leaders hold a soft corner for their brethren in the Taliban, and have consistently opposed military action against terrorists. Although Mr Qadri and his allies have so far done nothing to give a sectarian colour to their protest, their rivals appear keen on doing just that.Ahle Sunnat Wal Jamaat (formerly known as banned sectarian outfit Sipah-e-Sahaba) Chief Maulana Ahmad Ludhianvi led a rally in Islamabad on Friday, where he urged the participants of the sit-ins to follow the constitution for redress.

It would have been acceptable if he had stuck to this message alone, or if supremacy of the constitution was his real concern, but unfortunately, there was plenty more he had to offer on the subject. Mr Ludhianvi claimed that Mr Qadri and allies were working on Iran’s agenda, of course, and that the protestors should follow his example for seeking justice.

God forbid. Is it only chronic sectarianism, or are insecurities over fears of being abandoned by the military establishment also at play here? Either way, it is a pity that such elements have jumped in to ‘save the day’. We are all very concerned about democracy being derailed, but not remotely enough to seek the support from the proponents of a hateful and discriminatory ideology. We must not allow hate-mongers to pollute the pro-democracy narrative, and should always remain mindful of their abhorrent role in breeding extremism and violence.