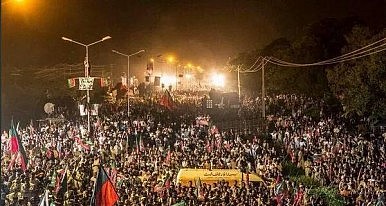 Protests against Pakistan’s government (including separate movements backed by Imran Khan and Tahir ul-Qadri) have sparked concerns about a political crisis in Islamabad. On Wednesday, protestors demanding the resignation of Prime Minister Nawaz Sharif entered Islamabad’s “Red Zone,” the political heart of the city where the prime minister’s residence, National Assembly, and Supreme Court are all located (as well as a number of diplomatic compounds). Meanwhile, Sharif has enlisted the aid of Pakistan’s military in keeping the peace.

On Wednesday, with the news that protestors had entered the Red Zone, China’s Foreign Ministry addressed the potential crisis in a routine press conference. The response was typical of Chinese diplomatic statements on other countries’ domestic crises: China is following the situation closely and “sincerely hopes that parties concerned can resolve disputes peacefully.” Spokesperson Qin Gang  added a call for all parties to “jointly safeguard national stability while protecting the fundamental interests of the country and the people.”

From one angle, Beijing has little to worry about with this crisis. No matter who emerges as the “victor” from the protests, whether Sharif, one of his challengers, or the military, Pakistan will hold firm to its “all-weather friendship” with China. The bilateral relationship is far too important for Islamabad to abandon it, and none of the parties involved in the current protests have indicated they would seek to do so.

However, the potential for short or medium-term instability in Pakistan is itself cause for concern in Beijing. Chinese leaders have already made it clear that unrest and instability is a major limiting factor on China-Pakistan economic relations. With the two countries’ long-standing ties and China’s major push to develop economic ties with its western neighbors, increased economic cooperation between Pakistan and China should be a slam dunk. However, concerns that Pakistan’s government cannot ensure the safety of Chinese citizens or investments have made Beijing nervous about going all-in on the planned China-Pakistan Economic Corridor. Signs of political unrest in Pakistan’s capital will only reinforce these concerns.

Instability is also a major concern for China strategically and politically. Beijing has declared its own war on terror in response to a number of high-profile attacks believed to be carried out by Uyghur militant groups. Yet to be successful, China’s domestic crackdown on terrorism must be accompanied by increased efforts from its neighbors, and particularly Pakistan, where the East Turkestan Islamic Movement (ETIM) and its offshoot group, the Turkestan Islamic Party are believe to be based. Writing for Foreign Policy, Andrew Small notes that Chinese officials are growing increasingly frustrated with what they see as a lack of commitment on Pakistan’s part to eradicating groups like ETIM and TIP from its soil.

For this reason, China warmly welcomed the beginning of Operation Zarb-e-Azb, a military operation against terrorist groups in Pakistan’s North Waziristan tribal region. The operation has reportedly targeted ETIM along with the Tehrik-i-Taliban Pakistan (TTP) and other terrorist organizations. Small suggests that Beijing’s concern over Uyghur terrorist cells in Pakistan helped encourage the roll-out of Operation Zarb-e-Azb. A domestic political crisis would sap the time and energy available to continue the operation, however, potentially sidelining the military action that Beijing has been encouraging.

Given the potential for instability to affect China’s economic and political interests, Beijing will indeed continue to “closely follow” the events in Pakistan, to paraphrase Foreign Ministry spokesperson Qin Gang. As of yet, though, the situation has not escalated to a point where China feels truly concerned.