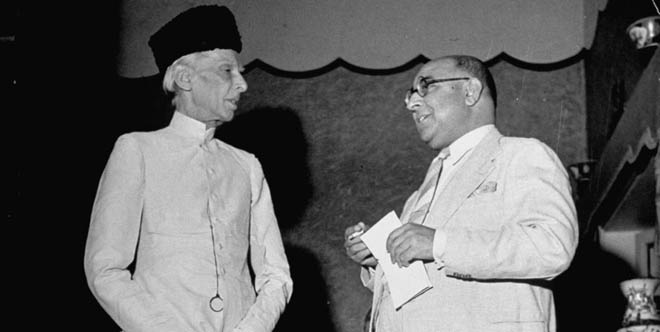 ‘No other language but Urdu’: Jinnah and Liaquat Ali Khan.

This August Pakistan is completing 67 years of its existence. While looking at this period one often wonders why this country with so much of potential went astray and ended up as a fragile and almost a failed state. Some blame General Ayub Khan for usurping power by derailing democracy, some accuse Iskander Mirza, the first president of Pakistan, for declaring the first countrywide martial law and abrogating the 1956 constitution. There are still some others who find fault with the shenanigans of Malik Ghulam Muhammad, the third governor general of Pakistan, for dismissing the second prime minister of Pakistan, Khawja Nazimuddin, and then dissolving the first constituent assembly.

Yet if we look carefully, the rot started much earlier. The religion card that was so deftly played by the Muslim League led by Jinnah continued its spiral movement after partition. Forget about the warnings conveyed to the departing Muslims from the stairs of the Jamia Mosque in Delhi, just peep into the folds of initial years after Pakistan’s inception and you get a picture of what was inevitable to come. No surprises await you in the coming years if you untangle the web of postnatal squirms of the country.

Let’s start from the day of independence when Jinnah decided to become governor general rather than prime minister of Pakistan. Everyone knows that in a parliamentary democracy head of the government is usually prime minister and being governor general as head of state is rather a ceremonial job. Being the strongest personality in Muslim League, it was well-nigh impossible for Jinnah to mutate into a ceremonial head of state. This decision perplexed many but ultimately paved the way for an ongoing tussle between the heads of state and the heads of government.

Since 1947, this tug of war has marred the history of Pakistan in numerous ways; be it Liaquat Ali Khan and Khawja Nazimuddin or Muhammad Khan Junejo and Mir Zafarullah Jamali, almost all prime ministers have been expected to toe the line provided by the head of state, failing which they invited the wrath of the more powerful.

In addition to opting for the governor generalship, Jinnah made another important decision on the Independence Day; for the flag hoisting ceremonies in Karachi and Dacca (now Dhaka) two Deobandi religious leaders — Maulana Shabbir Ahmed Usmani and Maulana Zafar Ahmed Usmani — were given the honour of unfurling the national flag. Despite their common surname i.e Usmani, they were not related but both belonged to the Deobandi school of thought. It is pertinent to mention here that most Deobandi scholars were either with Congress (such as Maulana Abul Kalam Azad) or with Jamiat Ulemae Hind (such as Maulana Hussain Ahmed Madni). Contrary to the mainstream Deobandi politics of Indian nationalism, the two Usmanis had supported the Pakistan Movement and by giving them the distinction Jinnah had rewarded them in kind.

Interestingly, when the first cabinet of Pakistan took oath on August 15, 1947, there was an unlikely person to be inducted as the first minister for law. By choosing Jogendara Nath Mandal, a Hindu, Jinnah was probably trying to send a signal that despite the two Deobandis hoisting the national flag, Pakistan was not going to have a Muslim-only government. Though, ultimately the first signal proved to be long-lasting than the second and neither could Mandal survive for long nor his Hindu community had a bright future in Pakistan. In the final analysis, Deobandis seemed to have an upper hand.

The same day i.e. on August 15, M. Ayub Khuro and Iftikhar Ahmed Mamdot took oath as chief ministers of Sindh and Punjab respectively. The provincial governments were taking shape and for a while it appeared that parliamentary democracy would take root in provinces as well as at the centre. A jolt came within a week when in the NWFP (now Khyber Pakhtunkhwa) Dr Khan Sahib’s provincial government was dismissed. This was the first provincial government to be dismissed in Pakistan. Dr. Khan Sahib’s full name was Khan Abdul Jabbar Khan and he was elder brother of Khan Abdul Ghaffar Khan — that indomitable freedom fighter from that region. The two brothers were supporters of the Indian National Congress and they had boycotted the referendum held earlier to gauge the popular support for the creation of Pakistan.

Even if the Muslim League could not tolerate a pro-Congress government in the NWFP, the rightful measure was to bring about a change within the confines of the provincial assembly rather than opting for the dismissal at the behest of the centre. This set an unfortunate precedence for all times to come and the establishment kept dismissing not only the provincial governments but the federal ones too. Examples are too many to repeat here.

Another unpleasant example was set when after dismissal, Dr Khan Sahib was detained and barred from participating in political activities. He remained confined in Hazara for a couple of years. To top it all, in September 1947 the Red Shirt Movement of Khan Abdul Ghaffar Khan was also banned and despite his larger than life stature in the freedom struggle, Ghaffar Khan was also arrested and put behind bars.

In February 1948, Chaudhry Khalique-uz-Zaman was elected as the first president of the Pakistan Muslim League. Prior to this, it was called All India Muslim League and its last president was Jinnah who after becoming the governor general had relinquished the presidency of the Muslim League. In the same month, i.e. in February 1948 the Constituent Assembly met for the second time after a recess of almost six months. The second session was chaired by Jinnah himself (the first was chaired by Mandal, the law minister).

An important decision taken at the second session was regarding the separation of the Muslim League administrative positions from the executive posts of the government of Pakistan. This decision was reversed later by Liaquat Ali Khan when he got himself elected the president of the Muslim League when he was still the prime minister.

The second significant step was declaring Urdu as the sole national language of the country. Some members from East Bengal (the province had not yet been renamed as East Pakistan) demanded that the Constituent Assembly should meet alternatively in Dacca and they should be allowed to speak Bangla on the assembly floor.

Prime Minister Liaquat Ali Khan vociferously opposed this suggestion and reiterated his resolve to allow the use of only Urdu for the sake of ‘national unity’. This decision was to have long-lasting effects on the ‘national unity’.

Another nail in the coffin of the ‘national unity’ was hammered when in March 1948, Jinnah while addressing the annual convocation of the Dacca University made it absolutely clear that there would be one and only national language in the country i.e. Urdu and no other language could be considered for a national status. We need to remember that the population of East Bengal constituted around 55 per cent of the total population of Pakistan and that Bengali populace was averse to adopting Urdu as the sole national language.

Still, not even one year of independence had completed that in April 1948 the chief minister of Sindh, Ayub Khuro, was dismissed and Pir Ilahi Bukhsh was appointed as the new chief minister. It is pertinent to mention here that immediately after Partition, Pir Sahib had suggested that all the mosques in Pakistan should be advised to mention Jinnah’s name in the Friday sermons as was the practice in medieval times when the caliph’s name was mentioned in Friday sermons — luckily, nobody paid much attention to his idiotic proposal.

Ayub Khuro had become the chief minister of Sindh when he had replaced Sir Ghulam Hussain Hidayatullah who was the prime minister of Sindh before Partition. Ayub Khuro was in favour of restricting the settlement of refugees in Sindh and this had created frictions with central ministers such as Malik Ghulam Muhammad and Ghazanfar Ali Khan. At the same time, some provincial ministers in Sindh e.g. Ghulam Ali Talpur and Pir Ilahi Bukhsh were hatching conspiracies against Ayub Khuro. As a first step, Sindh Governor Ghulam Hussain Hidayatullah deprived Ayub Khuro of the provincial interior ministry portfolio prompting Khuro to complain to Jinnah. Khuro wanted to remove GA Talpur and PI Bukhsh as provincial ministers.

On April 26, 1948, Ayub Khuro was accused of gross misconduct and corruption and removed from his post. The new CM, PI Bukhsh, was much more loyal to Jinnah and the central government. After the dismissal of Dr Khan Sahib’s government in the NWFP, the Sindh provincial government of Ayub Khuro was the second to go while Jinnah was still alive.

To sum it up, at least six important seeds were sown in the very first year of the nascent country that grew into thorny bushes. First, the early signs of the power play between the head of state and the head of government became visible. Second, an unnecessary limelight was provided to the Deobandis who later on craved for even greater chunk of the pie and kept encroaching upon the social space. Third, the dismissals of the provincial governments in the NWFP and Sindh — without any vote of no-confidence in the assemblies — set the country on the path of similar dismissals. Fourth, the detention of political opponents and imposing bans on their activities could hardly cultivate democratic traditions. Fifth, the use of corruption charges became a hallmark of the establishment against political rivals. And last, the disregard shown to legitimate demands of provinces in terms of not recognising other languages has continued to this day.