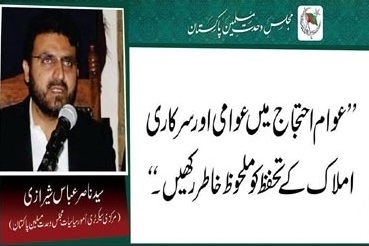 Revolution March of Sunni-Shia allied parties, isolated notorious takfiri terrorists of banned Sipah-e-Sahaba and its affiliates such as ASWJ and Lashkar-e-Jhangvi, and other fanatics.

Revolution March of Sunni-Shia allied parties, isolated notorious takfiri terrorists of banned Sipah-e-Sahaba and its affiliates such as ASWJ and Lashkar-e-Jhangvi, and other fanatics.

Pakistani analysts who closely watch the Shia role in Pakistani politics conclude that Pakistani nation has entered into a new phase in which Shia Muslims are very much back in mainstream politics.

Talking to the Shiite News, they said, leading Shia party Majlis-e-Wahdat-e-Muslimeen has successfully isolated the takfiri terrorists and their allies in Pakistani politics. They noted it that Allama Sajid Naqvi’s Shia Ulema Council had successfully continued as Deobandi parties ally but Sunni Bralevis’ dominant parties are allies of the MWM.

“Majority of Deobandi leaders always have a soft corner for takfiri Taliban, Sipah-e-Sahaba (now called ASWJ), and such intolerant terrorist outfits despite their alliance with Allama Sajid Naqvi,” one of Karachi-based political observer said.

Another analyst said that reaction from notorious takfiri terrorist ringleader Ahmed Ludhianvi of banned Sipah-e-Sahaba (ASWJ) was a proof that MWM was on right track. Ahmed Ludhianvi was scared of the success of the Revolution March and began repeating oft-repeated baseless but provocative stance against some Shia parties. In the past, he also used similar words for Allama Sajid Naqvi but this time, he did not include him but he named only MWM, ISO and SMP for his anti-Shia rants.