Is America’s relationship with Saudi Arabia broken beyond repair? – by Martin Chulov 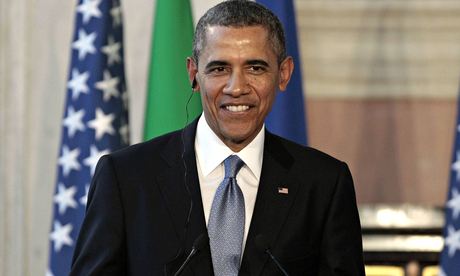 Barack Obama arrives in Riyadh seeking rapprochement with an aggrieved Arab ally whose interests are increasingly at odds with its key western backer.

The president’s flying visit – no more than an evening in the Saudi king’s palace – is his first since the ousting of Hosni Mubarak, which drove an initial wedge between both capitals.

Ever since, relations have tangibly soured, with US outreach to Iran and ambivalence on Syria particularly irking Saudi leaders, who believe their arch-foe, Tehran, has been empowered at their expense.

So bothered has Riyadh become by what it sees as naive appeasement of Iran that it now seems ready to project itself regionally without US cover.

“The US has underwritten the regional security order for the past 70 years and it sees now as a good time to disengage,” one senior figure told the Guardian recently. “We will have to do it all ourselves.”

Saudi anger is rooted in the US response to the Arab awakenings that rumbled through North Africa and the Middle East in the three years since Mubarak, a staunch regional ally, stood down.

His demise, along with that of Muammar Gaddafi in Libya and Zine el-Abidine Ben Ali in Tunisia, posed a stark threat to the kingdom’s strict authoritarian rule, as did the vigorous but short-lived uprising in Bahrain. Riyadh believed Obama should have done much more to bolster Mubarak in particular, along with Bahrain’s Sunni rulers.

But trouble in the bilateral relationship really began when revolution made its way to Syria, a country central to the tussle for regional influence between the Sunni and Shia Islamic power bases. Riyadh enthusiastically threw its support behind the Sunni majority opposition in Syria, while Tehran was just as bullish in its support for the Assad regime, where an Alawite elite has been aligned to Iran’s Shia rulers for the past 40 years.

The three devastating years of war since have seen both heavyweights pour money and weapons into Syria. All the while, Saudi leaders have looked expectantly towards Washington, wanting the US to spearhead a military campaign to oust Assad and help install a new regime that looks their way.

For two weeks last September, when Obama sent warships to the eastern Mediterranean and threatened to strike Damascus after a mass chemical weapons attack, those hopes seemed about to be realised.

However, the plan was warehoused, shelving any chance of a reset between Riyadh and the Obama White House. Riyadh has spent the six months since fuming at what it sees as a weak-kneed administration that no longer shares its convictions. Negotiations with Iran over its nuclear programme reaffirmed a Saudi view that its strategic western partner was no longer dependable.

The anger on Syria has not let up. On Tuesday, at an Arab summit in Kuwait, Saudi crown prince Salman Bin Abdul Aziz said the world had betrayed the Syrian opposition and that more needed to be done to change the balance of power on the ground in Syria.

“We are doing more and we will continue to do more,” the Saudi official said. “We are going this alone as difficult as it is for us.”

Riyadh is slowly getting used to projecting its influence regionally, rather than through powerful proxies. It plans to receive Obama politely and to press home its insistence that the region’s other intractable conflict, the Israeli/Palestinian crisis, needs substantive Israeli concessions, and renewed US pressure.

Ongoing bilateral military ties – Saudi remains one of the largest buyers of US weapons – are also on the table. The visit though will remain perfunctory, reflecting the troubled relationship.

Riyadh has given up its earlier hope that the US can bring an end to the war in Syria. But, while openly threatening to turn elsewhere for allies, it is not yet ready to sever strategic ties.

Obama’s main message to his hosts will be that he is not neglecting them. He also aims to back recent Saudi stances against extremists that hold sway in parts of northern Syria and in Iraq’s Anbar province. He is also expected to insist that no other country in the region can replace the US as a security guarantor. That may well prove a tough sell.

56 responses to “Is America’s relationship with Saudi Arabia broken beyond repair? – by Martin Chulov”