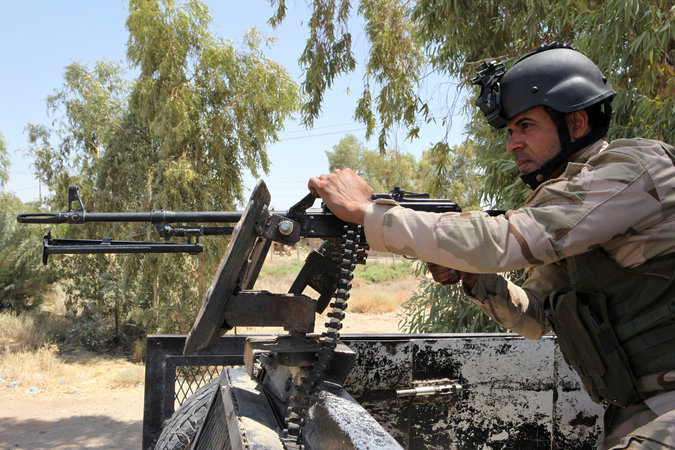 BAGHDAD — Wahabi/Deobandi extremists seized control of three towns in northern Iraq on Sunday after fierce battles with Kurdish security forces, sending thousands of people fleeing to the nearby mountains and threatening the country’s largest dam.

In the darkness of Sunday morning, the Sunni fighters swept in to take one of the towns, Sinjar, and set about their method of conquest, which is as familiar as it is brutal: They destroyed a Shiite shrine, executed resisters, overran local security forces and hoisted the black flag of the Islamic State in Iraq and Syria, or ISIS, above government buildings.

Hours later, as the militants demanded that the city’s residents swear allegiance to ISIS or be killed, the group’s social media campaign was underway, with photos posted online showing militants patrolling the city.

“A humanitarian tragedy is unfolding in Sinjar,” Mr. Mladenov said.

In the face of stiff resistance from Shiite militias aligned with Iran that have stalled their march on Baghdad, the ISIS fighters who captured Mosul in June pushed north during the weekend. By Sunday afternoon, they were in control of two other towns after fierce battles with Kurdish security forces, known as the pesh merga, who have been thrust into combat to defend the border of their autonomous region in northern Iraq from encroachments by ISIS.

In a statement, ISIS boasted of conquering “more important areas which were controlled by the pesh merga and the secular militias.” With the new territory, which the group described as “the border triangle of Iraq, Syria and Turkey,” ISIS strengthened its hold on territory that traverses the frontiers of Iraq and Syria, giving it an even greater ability to move fighters and weapons between the front lines of the civil wars in both countries.

According to security officials and residents in the area, the Kurdish forces were routed from Zumar, a town on the road from the Syrian border that also sits on oil fields, and then Sinjar. Sinjar, an isolated city in northwestern Iraq, has been home to a sizable community of Yazidis, Kurdish speakers who ascribe to a religion that combines elements of Islam and ancient Persian religions and who are considered apostates by Muslim extremists.

Later on Sunday, the militants captured Wana, a strategic town near the Tigris River — putting them within striking distance of the Mosul Dam, the country’s largest and an important supplier of electricity and water. The dam is on the Tigris River about 30 miles northwest of Mosul, Iraq’s second-largest city, which fell to ISIS on June 10.

Yazidi residents of Sinjar, who were reached by phone, were terrified. They told of kidnappings and executions of members of their sect. One resident, Sami Hassan, said he was at work at a hospital on Sunday when an injured ISIS fighter arrived and demanded to know the sect to which Mr. Hassan belonged.

Mr. Hassan said he had escaped from a window while being shot at.

Another local, Khudhur Rasho, said he had seen two Yazidi men executed and the members of 10 families, their hands bound behind their back, being led away by militants.

A State Department spokeswoman, Jen Psaki, said Sunday that ISIS posed “a dire threat to all Iraqis, the entire region and the international community” and that the United States would continue to seek ways to support the Iraqi security forces and the Kurdish pesh merga.

The seizing of the three towns in a triangle that stretches north and west from Mosul to the borders of Syria and Turkey allowed the extremists to expand their territory, but the capture of the Mosul Dam would be a bigger prize, and could give the militants the ability to unleash a deadly flood on large populations.

On Sunday afternoon, conflicting reports emerged about who was in control of the dam, with some local news media reporting that ISIS had captured it. But Kurdish officials and an official at the Ministry of Water Resources in Baghdad denied those reports.

Keeping the dam, and other important infrastructure of the Iraqi state, out of militant hands has been a priority of the Iraqi government and the American military advisers who recently rushed back to Iraq.

Seven years ago, a report by the Office of the Special Inspector General for Iraq Reconstruction, a Pentagon watchdog, highlighted structural problems at the dam, and its warnings about safety hinted at the catastrophic possibilities should the dam fall into the hands of ISIS. The report warned that a failure at the dam could send a 65-foot wave across parts of northern Iraq. “The worst-case scenario would be a significant loss of life and property,” the report said.

Militants have also waged a fierce battle for control of Iraq’s second-largest dam, in Haditha, on the Euphrates River in Anbar Province. There, Sunni tribes, along with some Iraqi security forces, have been able to hold off the militants’ advance. But after ISIS took control of Falluja at the end of last year, militants seized the Falluja Dam, opening its gates and flooding farmlands and cutting off the water supply to southern Iraq.

The battles over the weekend deepened the humanitarian crisis in the north, with thousands of residents fleeing the fighting to the Kurdish region, and some Yazidis seeking shelter in the crevices of the barren mountains. The Kurdish regional government is struggling to deal with tens of thousands of refugees who have sought safety there from across Iraq and Syria.

The chaos that has unfolded in Iraq over the past two months has presented the Kurds with perhaps their greatest chance in generations to realize their long-held dream of independence. It has also presented them with acute challenges, which have crystallized over the past week with the upsurge in fighting and suggest that the road to statehood for the Kurds will be long and violent.

The gains over the weekend by ISIS heightened the problems faced by American officials in Washington as they weigh how to respond to the crisis in Iraq. But decisions about a possible broader American military role in Iraq have been largely put off as Iraq’s politicians struggle to form a new government after April’s national elections.

The Kurds, who have been longtime American allies, recently asked for military assistance from the United States to fight ISIS. American officials, determined to keep Iraq together as one country, are reluctant to supply weapons to the Kurds without the approval of the central government in Baghdad. That is unlikely to happen given the worries by Iraq’s Shiite-dominated leadership that the weapons would further embolden the Kurds to form a new state.

Instead, American officials are hoping to see Prime Minister Nuri Kamal al-Maliki, a Shiite who is struggling to secure a third term, replaced by someone who could persuade Iraq’s Shiites, Sunnis and Kurds to form a national unity government. According to Iraq’s constitutional timeline, Iraq’s Shiite parties must choose a nominee for prime minister by Friday. The prime minister would then have 30 days to form a new government.