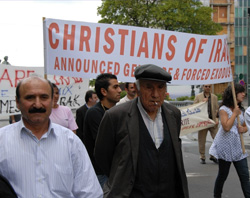 No one cares about the Christians of Mosul–or perhaps we should say the Christians formerly of Mosul. The reports in recent days suggest that the last Christians have now fled that city, forced out by Islamist militants who implemented a “convert or die” policy for Iraq’s ancient Christian community. The most assistance they have received thus far is an offer of asylum from France. If they can make it there, that is, since they have faced robbery, torture, and murder as they’ve made their exodus.

None of this has gone entirely unreported. These events have been allotted some headlines and the kind of procedural news coverage that the persecution of Christians usually elicits. But if the last remnants of Iraq’s beleaguered Christian population were hoping for any real outrage or anguish from the West, then they were setting themselves up for disappointment. Not only has it long been apparent that no one was ever going to take any action on behalf of these people, but as we have seen, Western publics weren’t even going to trouble themselves to get too worked up about these atrocities.

Given the huge demonstrations, United Nations Security Council resolutions, and endless hours of reporting on events in Gaza, one is tempted to say that Iraq’s Christians had the misfortune of not being Palestinian. However, that suggestion would be unfair. The world has also neglected the suffering of thousands of Palestinians murdered and starved by the Assad regime in Syria. It is not being Palestinian that wins the world’s attention; it is the accusation that culpability rests with Israel that really provokes some strength of feeling. If only the Christians fleeing Mosul could somehow frame the Israelis for their plight, then they might stand a chance of seeing their cause championed by a host of tweeting celebrities, UN delegates, far-left radicals, and perhaps even the West’s Muslim immigrant populations who have turned out in huge numbers to passionately demonstrate on behalf of Gaza like they never did for their coreligionists in Syria or Libya.

With reports of how the doors of Christian homes were ominously marked by Islamists so as to streamline this campaign of ethnic cleansing, with incidents of Christians having been crucified–yes, crucified–you might have thought that some of those avid humanitarian activists attending the recent anti-Israel rallies could have at least organized a sub-contingent to highlight the terrible fate of the Iraqi Christians, but no, that might have risked detracting in some way from the anti-Israel political objectives of these protests.

There is always something distasteful about playing the numbers game with such situations. It is, however, the favorite pastime of Israel’s detractors. The body count in Gaza is endlessly wheeled out to justify the preeminent importance that so many attribute to this cause. You can almost feel the most hardline anti-Israel activists willing it upwards so as to better serve their campaign. Undoubtedly that is Hamas’s calculation. Yet if the liberal college kids and left-leaning journalists who refer to these figures as justification for their obsessive focus on the subject were being remotely honest with themselves, then they would have to find some way of explaining the utter disinterest that they have shown events in Iraq and Syria, where the death toll has been surpassing that in Gaza on almost a weekly basis.

The long-suffering Christians of Mosul are perhaps considered by the anti-Israel campaigners with the same suspicion with which they viewed the victims of MH17. When news of that attack broke, the first reaction of prominent British news anchor Jon Snow was to unguardedly tweet out: “Awful danger that the shooting down of flight MH17 will provide cover for an intensification of Israel’s ground war in Gaza.” Those attending demonstrations against Israel’s actions in Gaza essentially made the same complaint, that that incident was being awarded too much media attention. The only reason that they weren’t expressing the same accusation regarding the Iraqi Christians is because those atrocities have only been allotted the most token coverage.

The contrast between the world’s non-reaction to the decimation of Mosul’s once 60,000-strong Christian community and the hysterical hate-fueled frenzy being directed against Israel over the casualties in Gaza reminds us that in the liberal imagination, all human suffering is not considered equal. The determining factor here is not the identity of the victims, but rather who can be framed for the crimes. No one has protested Hamas’s execution of Gazan “collaborators” or the reports of the many Palestinian children killed during the construction of Hamas’s terror tunnels. Every misfiring rocket that kills Gazans is attributed to Israel if at all possible. The only Palestinian casualties that anyone has claimed to be concerned with are those that can be used as ammunition in the war to delegitimize Israel and its right to self-defense.