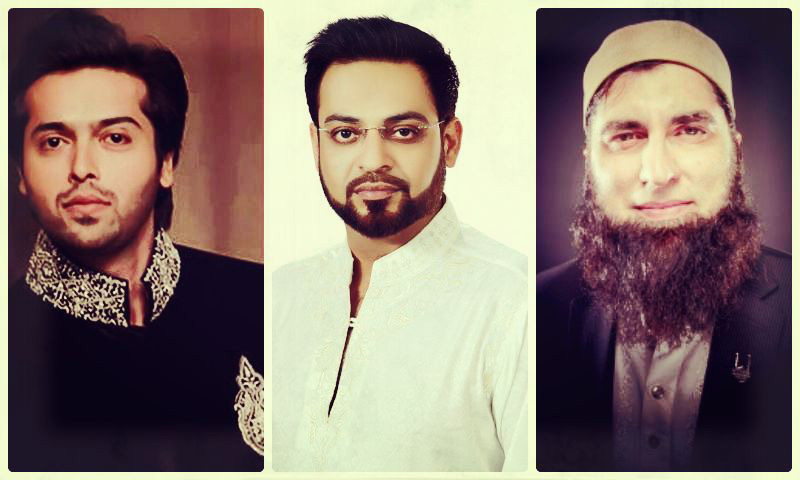 Remember everything your parents, grandparents, maulvi sahab and Islamiyat teacher taught you about Ramazan? Now try and forget it please because there seems to be no room for those teachings anymore in this country.

Tune in to one of our many local Ramazan transmissions on television and learn everything you need to know about the new face of the holy month.

We fast from sunrise to sunset, making sure our greed and desire to want stays under control, only to unleash it with a vengeance on one of Amir Liaquat or Fahad Mustafa’s Ramazan special shows, to name but two of the prominent ones.

On these shows, you are taught that nothing matters more than winning a Junaid Jamshed suit, a pair of Servis shoes and perhaps a ‘Voice ki gari’.

Forget teachings of charity and brotherhood – it’s time for you to compete with the person next to you, even if you have to make a complete fool of yourself on national television to defeat him or her.

Only recently, on ARY Digital’s Ramazan show ‘Jeeto Pakistan’, the host Fahad Mustafa had lined up a bunch of ladies to compete for a motorbike for their household.

In order to win, they had to cluck like a chicken.

Yes, that seems to be the high point of our evenings these days, watching dolled up giggly ladies being made to do ‘cookroo coo’ in order to win a prize.

Every year, brands such as Coca-Cola, Pepsi and Olpers can be seen in Ramazan-special advertisements that suddenly revolve around spirituality and religion. Islamic banking becomes even more popular and restaurants go all out to have grand all-you-can-eat deals to lure customers in.

The essence of simplicity and modesty we are taught to adopt is easily forgotten when religion starts being used a marketing tool. It is thus naïve to expect television channels to hold back from exploiting the religious sentiments of their audience.

Suddenly, popular actors from our drama industry who double as morning show hosts can now be seen adopting a new persona for their Ramazan transmission.

Forget about learned fresh faces, our drama heroes are enough to keep the show going in their stylish sherwanis and shiny kameezes. Criticising their wardrobe – a bit too much?

But then again, they are the face of Ramazan for their respective channels; their grandiosity along with their extravagant sets, contradict the very spirit of what they seem to celebrating.

But where so much hypocrisy plagues our nation, a little more won’t hurt. Especially not when it seems to excite so many around us.

Producers of such shows know exactly what to play at.

Package a show with very little substance, lots of free gifts, ‘religious-sounding’ background music and dot the set with an Islamic scholar here and there. There you have it – a Ramazan special show! No need to justify watching such content, it fits in perfectly with your pious routine this month.

Where most shows thrive on humiliating and belittling an over-enthusiastic live audience, there are thankfully others that actually focus on the core teachings of Islam and the essence of this month. Too bad when you dig into ratings, you find them way behind the ones mentioned above.

Instead of enticing greed and desire in an audience by throwing ‘gifts’ at them, it perhaps would have been a refreshing change to have programs focusing on Pakistan’s leading philanthropists. Or perhaps allow the very same products and companies funding these shows, to instead call an audience actually in need of help, and make their Eid dreams come true by giving them those gifts.

This way, they could continue to advertise their brands and actually do something good for society as well. Although if you were to stick with original teachings, doing work for charity looses its essence when publicised, for your intentions behind it may not remain true to the cause.

Or watch a man get his head shaved in front of a live audience in order to win a mobile? I guess not, for our masses only enjoy a show if it is infused with such belittling humour. Same goes for our political talk shows at night too, where millions tune in just to watch actors impersonating our politicians and making personal jabs and terrible jokes about the other.

These programs do not reflect our religious spirit or modesty or culture in any way. They instead display our lack of dignity and self-respect.

They allow mere television hosts to humiliate a naïve audience hungry for goodies.

They allow television producers to twist and manipulate religious sentiments and they allow corporations to use us, yet again, to make profit.

But they are not the only culprits. Until and unless the audience doesn’t protest, the show will go on.