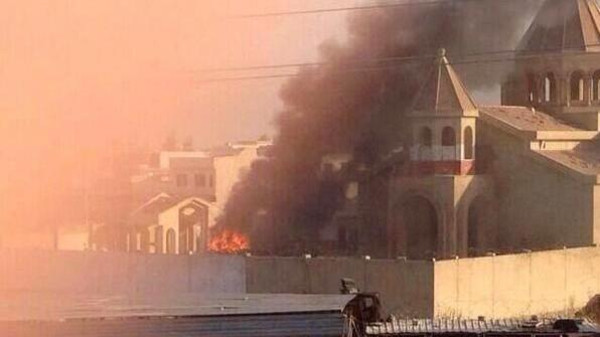 Militants from the radical jihadist group the Islamic State of Iraq and Syria have set fire to a 1,800-year-old church in Iraq’s second largest city of Mosul, a photo released Saturday shows.

The burning of the church is the latest in a series of destruction of Christian property in Mosul, which was taken by the Islamist rebels last month, along with other swathes of Iraqi territory.

A video posted on YouTube July 9 shows a tomb being destroyed with a sledgehammer which government officials said was “almost certainly” the tomb of Biblical prophet Jonah.

Earlier, Mosul’s Christians fled the city en masse before a Saturday deadline issued by the al-Qaeda-inspired Islamic State of Iraq and Syria (ISIS) for them to either convert to Islam, pay tax, leave or be killed.

Al Arabiya correspondent in Iraq Majid Hamid said the deadline set by the jihadist group was 12 p.m. Iraqi time (10 a.m. GMT). Hamid reported that many Christians fled the city on Friday. It is not clear if any remained after the deadline.

Patriarch Louis Sako told AFP on Friday: “Christian families are on their way to Dohuk and Arbil,” in the neighboring autonomous region of Kurdistan. “For the first time in the history of Iraq, Mosul is now empty of Christians,” he said.

Witnesses said messages telling Christians to leave the city by Saturday were blared through loudspeakers from the city’s mosques Friday.

A statement dated from last week and purportedly issued by ISIS that took over the city and large swathes of Iraq during a sweeping offensive last month warned Mosul’s Christians they should convert, pay a special tax, leave or face death.

Iraq was home to an estimated 1 million Christians before the 2003 U.S.-led invasion that ousted former President Saddam Hussein. Since then, militants have frequently targeted Christians across the country, bombing their churches and killing clergymen. Under such pressures, many Christians have left the country. Church officials now put the community at around 450,000.