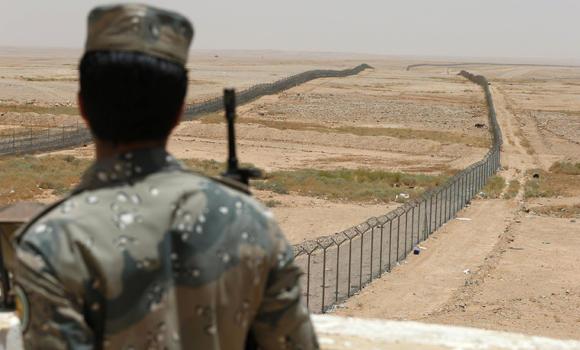 Saudi Arabia has deployed thousands of troops and set up extra barricades, infrared cameras and radar systems along its 850-km border with Iraq to counter the threat from the Islamic State (IS) and Shiite militias, according to recent local reports.
This comes in the wake of the IS or its Arabic acronym Daish, taking control of several towns on the Iraqi-Syrian border last month. The group’s leader, Abu Bakr Al-Baghdadi, later announced himself a caliph.
Since the IS attacks, Riyadh has sent thousands of troops to the area, to further beef up the already fortified border with walls and barricades. The closed area extends 10 km into Saudi territory. There is 24-hour surveillance of the area with radar and infrared cameras.
Over 1,000 soldiers, 1,000 border guards, and three units of helicopters have been deployed to reinforce the area near Arar since the advancement of the IS, according to Gen. Faleh Al-Subaie, commander of the Saudi Border Guard in the area.Custodian of the Two Holy Mosques King Abdullah last month pledged to take “all necessary measures” to protect the Saudi people from both the Sunni IS group, which has been classified a terrorist organization, and the Shiite militias in Iraq, even though the latter have mobilized their forces to fight the rebels.
Saudi officials have not disclosed the number of additional military personnel sent to the border, but some media reports have put the number at over 30,000 men. Although alarmed by the advancement of the IS, Saudi officials believe that the Shiite militias, that are allied to the governments in Bagdad and Iran, are the bigger threat.
“DAISH is not that important, it is only a terrorist group without any military capabilities. The most important force and threat is the organized Shiite militias with some other party behind their plans,” said Al-Subaie. While there is heavy commercial traffic over the border between Syria and Iraq, this is not the case with the Saudi-Iraqi border. The border point near Arar was last opened in October to allow 65,000 Iraqi pilgrims to enter for Haj.
Once the border crossing is closed, the area and roads leading into Iraq is overrun with weeds and wild plants, with heavy dust gathering on the customs building. It is extremely difficult to get through the barriers and walls. Since the establishment of the reinforced defenses two years ago, only 12 people were caught trying to illegally cross the border, according to Saudi officials.
One border guard, wearing a grey stone-patterned camouflage uniform, said that Saudi personnel have seen more activity among the ranks of their counterparts on the other side of the border.
Last week three rockets were fired from the Iraqi side toward a residential complex housing Saudi border guards.
Al-Subaie said he does not know who fired the rockets but believed they were meant to provoke a violent response. “We have strict orders not to respond by firing back,” he said.
“Some say we should find out who fired the rockets and retaliate, but our government refuses and says we should be more alert and maintain peace and security in the area.”Al-Subaie said the Iraqi border guards have told the Saudi government that they discovered three abandoned vehicles on their side. The vehicles were apparently used to launch the three Grad rockets. Five more rockets were found in the vehicles.
One Shiite militia announced last November that it had fired Grad rockets into Saudi territory near the border with Kuwait. This was from a desert area with the closest town, Al-Nukhay, about 80 km away, still under the control of the Iraqi government. The land to the north east of the town is under the control of DAISH. The Najaf governorate, the stronghold of the Shiite militias, is located south of the town.
Capt. Sultan Al-Mutairi of the Border Guard said they are not sure who fired the Grad rockets. “It could be DAISH, the Shiite militias or other groups. There are so many terrorist groups in Iraq, it is a total mess out there in that country.”