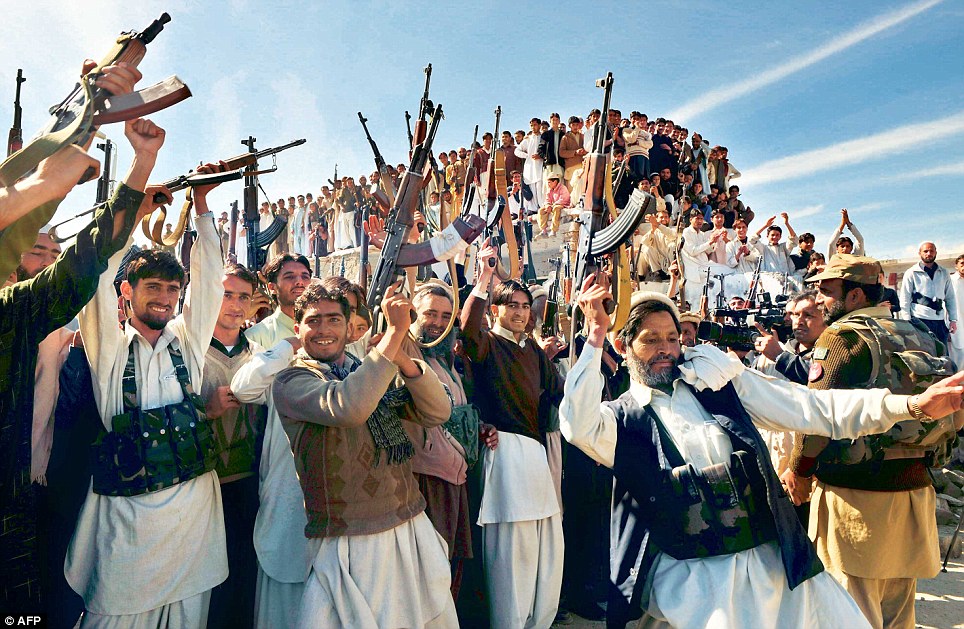 Ghazwa-e-Hind refers to an indoctrinated view of a final apocalyptic war in which India will be conquered by a jihadi army. All soldiers of this army are guaranteed a place in heaven.

This term is freely used in jihadi circles and on the web, but is considered bizarre by others.

Sources say the security establishment has been on the trail of launch-pads being set up within the country, and is also in touch with its counterparts in West Asia in order to crack the growing network.

To begin with, the terror group that was created and led by Arab fighters now has recruits from Kashmir-centric (Deobandi) groups.

The al-Qaeda nexus with Kashmir-centric groups indicates it has a readymade jihadi framework in India.

There is other proof too of al-Qaeda using its nexus with Indian groups to spread its ideology.

An online English publication of al-Qaeda called Azan which is not available to the general public but is circulated through changing e-mails and encryption tools is being downloaded by Kashmiri groups.

Sources say this only underlines the trend of terror groups within India getting attracted to the al-Qaeda and global jihad ideology.

Agencies fear that the Azan tactic of spreading the terror group’s ideology could spawn anonymous and isolated modules that will be difficult to detect but potent enough to carry out big attacks.

Intelligence reports also state that groups like Tehreek-e-Taliban have declared they will open ‘offices’ in Kashmir.

It has been revealed that a Taliban flag was hoisted at a point overlooking Srinagar last year, and the walls of Hari Parbat fort were painted with slogans like ‘Welcome Taliban.’

Sources say there is an urgent need for the home ministry and intelligence agencies to understand the threat.

“Indicators need to be monitored to prevent the situation from worsening,” said one official.

Al-Qaeda’s propaganda arm, Al Sahab, released a video recently, titled ‘Why is there no storm in your ocean?’ The report states that the video and transcripts were posted on several jihadi forums.

The videos have speeches asking youths from Delhi, Uttar Pradesh, Bihar, Gujarat and South India to join the global jihad. Incidentally, these are the areas where young men were recruited by the Indian Mujahideen (IM), India’s homegrown terror group that has become synonymous with bomb blasts in public places.

With the IM facing a major setback because of a series of arrests, including that of its top leader Yasin Bhatkal, sources say Indians fighting in Iraq for terror group Islamic State of Iraq and Syria (ISIS) are part of larger scheme.

Many more recruits are getting attracted to the global jihad that can later be used to wage war against India.

There are also distinct inputs on al-Qaeda running a separate terror module in India as the homegrown terror outfit IM is making efforts to go global and establish strong links with groups like al-Qaeda, Taliban and Hizbut Tahrir.

There is also evidence of al-Qaeda keeping a close watch on activities in India. The charge-sheet filed by the National Investigation Agency (NIA) against Bhatkal says that organisations al-Qaeda and the Taliban are helping IM.

It also mentioned that the investigation revealed that some IM members are fighting on the Afghanistan-Pakistan Border.

NIA has said in the charge-sheet that Riyaz Bhatkal, a top IM commander based in Pakistan, travelled to tribal belts on the Af-Pak border to establish contact with al-Qaeda.

“After the meeting, which was very fruitful, Al Qaeda gave specific tasks to the IM for execution and agreed to train their cadres in terrorist activities,” the charge-sheet says.

Pakistan Taliban have a keen interest in J&K

The withdrawal of US forces from Afghanistan has already fuelled concerns in the Indian security establishment about its implications on Jammu and Kashmir.

The volatile Afghanistan-Pakistan border is expected to explode into further chaos with jihadists expanding their reach to conflict spots such as J&K.

The intelligence agencies have assessed that around 800 militants, mostly foreigners, are ready to cross over the Line of Control (LoC) to spread terror in J&K. With the coming Assembly election in the state, the militant activity is likely to increase. The LoC itself had remained volatile during much of last year, when frequent ceasefire violations were reported.

Even this year, the situation has not improved, though the two countries have initiated steps to normalise the ties.

Sources said the Pakistan Taliban have a keen interest in J&K.

Further, the Pakistan army has not subsided its efforts to push through militants across the LoC.

All the ceasefire violations are linked to the infiltration bids, said officials.

More than two dozen militant camps are still said to be active in Pakistan- occupied Kashmir.

The army has noticed that infiltration attempts have become bolder and the terrorists showed high level of training and carry sophisticated communication equipment to stay in touch with their handlers.

The recent encounters with militants have indicated that their combat techniques have improved drastically.

Most of the camps are located around Muzaffarabad in Kashmir. Another cluster is located in Kotli facing Poonch and Rajouri.