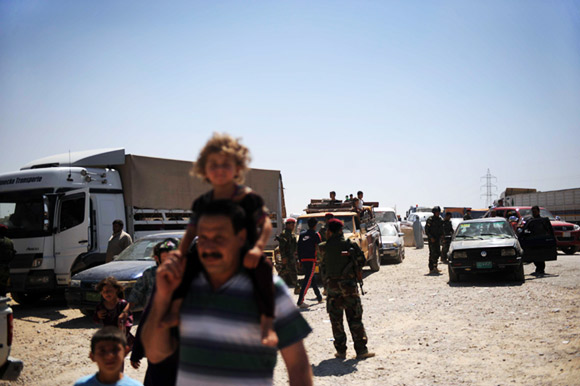 BAGHDAD (The Borowitz Report)—Just days after former Vice-President Dick Cheney said that he had no regrets about the invasion of Iraq, people fleeing their homes across that war-torn nation expressed tremendous relief that he was at peace with his decision.

As news spread that Cheney would not change a thing about the 2003 invasion, Iraqis driven out of their villages and towns by marauding terrorists called the former Vice-President’s words well-timed and soothing.

Sabah al-Alousi, who fled Mosul when ISIS militants overran it last month, said that Cheney’s confident pronouncement about the invasion of Iraq “is the first good news I’ve heard in a long time.”

“As I’ve fled from town to town, looking for a place where I might not be suddenly slain for no reason, the one thought that kept nagging me was, ‘How does Dick Cheney feel about all of this?’” he said. “I can’t tell you what a relief it is to know he isn’t losing any sleep.”

The Iraqi man said that he had been concerned that Cheney might harbor regrets about Iraq, such as the trillions of dollars spent, thousands of lives lost, W.M.D.s not found, and international disgrace of Abu Ghraib, but thanks to the former Vice-President’s recent statements, “I now see that I was worried about nothing.”

“Iraq is a scary place right now,” al-Alousi said. “The country could be broken into pieces, or become a part of an Islamic caliphate, or be the scene of unspeakable sectarian violence for years to come. But somehow, knowing that Dick Cheney would do it all over again if he could makes everything a little better.”