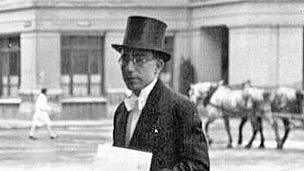 Thousands of Iranian Jews and their descendants owe their lives to a Muslim diplomat in wartime Paris, according to a new book. In The Lion’s Shadow tells how Abdol-Hossein Sardari risked everything to help fellow Iranians escape the Nazis.

Eliane Senahi Cohanim was seven years old when she fled France with her family.

She remembers clutching her favourite doll and lying as still as she could, pretending to be asleep, whenever their train came to a halt at a Nazi checkpoint.

Mrs Cohanim and her family were part of a small, close-knit community of Iranian Jews living in and around Paris.

Her father, George Senahi, was a prosperous textile merchant and the family lived in a large, comfortable house in Montmorency, about 25km (15.5 miles) north of the French capital.

When the Nazis invaded, the Senahis attempted to escape to Tehran, hiding for a while in the French countryside, before being forced to return to Paris, now in the full grip of the Gestapo.

“I remember their attitude. The way they would walk with their black boots. Just looking at them at that time was scary for a child, I think,” recalls Mrs Cohanim, speaking from her home in California. 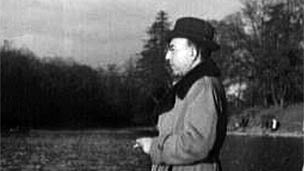 Like others in the Iranian Jewish community, Mr Senahi turned for help to the young head of Iran’s diplomatic mission in Paris.

Abdol-Hossein Sardari was able to provide the Senahi family with the passports and travel documents they needed for safe-passage through Nazi-occupied Europe, a month-long journey that was still fraught with danger.

“At the borders, my father was always really trembling,” recalls Mrs Cohanim but, she adds, he was a “strong man” who had given the family “great confidence that everything would be OK.”

The 78-year-old grandmother has lived for the past 30 years in California with her husband Nasser Cohanim, a successful banker. Mrs Cohanim has no doubt to whom she and her younger brother Claude owe their lives.

“I remember my father always telling that it was thanks to Mr Sardari that we could come out.

“My uncles and aunts and grandparents lived there in Paris. It was thanks to him they weren’t hurt.

“The ones that didn’t have him, they took them and you never heard about them again.”

Of Mr Sardari, she says: “I think he was like Schindler, at that time, helping the Jews in Paris.”

Like Oskar Schindler, the German industrialist who saved more than 1,000 Jews during the Holocaust by employing them in his factories, Sardari was an unlikely hero.

In his book In the Lion’s Shadow, author Fariborz Mokhtari paints a picture of a bachelor and bon viveur who suddenly found himself head of Iran’s legation house, or diplomatic mission, at the start of World War II.

Although officially neutral, Iran was keen to maintain its strong trading relationship with Germany. This arrangement suited Hitler. The Nazi propaganda machine declared Iranians an Aryan nation and racially akin to the Germans.

Iranian Jews in Paris still faced harassment and persecution and were often identified to the authorities by informers.

In some cases, the Gestapo was alerted when newborn Jewish boys were circumcised at the hospital. Their terrified mothers were ordered to report to the Office of Jewish Affairs to be issued with the yellow patches Jews were forced to wear on their clothes and to have their documents stamped with their racial identity.

But Sardari used his influence and German contacts to gain exemptions from Nazi race laws for more than 2,000 Iranian Jews, and possibly others, arguing that they did not have blood ties to European Jewry. 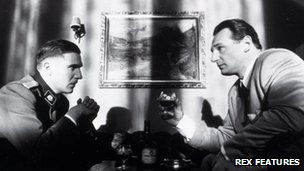 Oskar Schindler’s story was immortalised by Hollywood in 1993

He was also able to help many Iranians, including members of Jewish community, return to Tehran by issuing them with the new-style Iranian passports they needed to travel across Europe.

A change of regime in Iran, in 1925, had led to the introduction of a new passport and identity card. Many Iranians living in Europe did not have this document, while others, who had married non-Iranians, had not bothered to get Iranian passports for their spouses or children.

Iran signed a treaty with the Allies and Sardari was ordered by Tehran to return home as soon as possible.

But despite being stripped of his diplomatic immunity and status, Sardari resolved to remain in France and carry on helping the Iranian Jews, at considerable risk to his own safety, using money from his inheritance to keep his office going.

The story he spun to the Nazis, in a series of letters and reports, was that the Persian Emperor Cyrus had freed Jewish exiles in Babylon in 538 BC and they had returned to their homes.

Here you have a Muslim Iranian who goes out of his way, risks his life, certainly risks his career and property and everything else, to save fellow Iranians”

However, he told the Nazis, at some later point a small number of Iranians began to find the teachings of the Prophet Moses attractive – and these Mousaique, or Iranian Followers of Moses, which he dubbed “Djuguten,” were not part of the Jewish race.

Using all of his lawyer’s skill, he exploited the internal contradictions and idiocies of the Nazis’ ideology to gain special treatment for the “Djuguten”, as the archive material published in Mr Mokhtari’s new book shows.

High-level investigations were launched in Berlin, with “experts” on racial purity drafted in to give an opinion on whether this Iranian sect – which the book suggests may well have been Sardari’s own invention – were Jewish or not.

The experts were non-committal and suggested that more funding was needed for research.

By December 1942, Sardari’s pleas had reached Adolf Eichmann, the senior Nazi in charge of Jewish affairs, who dismissed them, in a letter published in Mr Mokhtari’s book, as “the usual Jewish tricks and attempts at camouflage”.

But Sardari somehow managed to carry on helping families escape from Paris, at a time when an estimated 100,000 Jews were deported from France to death camps.

The number of blank passports in Sardari’s safe is estimated to have been between 500 and 1,000. In his book, Mr Mokhtari suggests that if each was issued for an average of two to three people “this could have saved over 2,000 individuals”.

Sardari never sought recognition for his work during his lifetime, insisting he had only been doing his duty. He lived his final years in England in the early 1980s after losing his ambassador’s pension and Tehran properties in the Iranian revolution.

He is believed to have died in Nottingham, where he moved to be close to a nephew, after living for a time in a bedsit in Croydon.

He was posthumously recognised for his humanitarian work in 2004 at a ceremony at the Simon Wiesenthal Centre in Los Angeles.

Mr Mokhtari hopes that by telling his story, through the testimony of survivors, including Mrs Cohanim, he will bring it to a wider audience but also shatter “popular misconceptions” about Iran and the Iranians.

“Here you have a Muslim Iranian who goes out of his way, risks his life, certainly risks his career and property and everything else, to save fellow Iranians,” he says.

“There is no distinction ‘I am Muslim, he is Jew’ or whatever.”

He believes the story illustrates the “general cultural propensity of Iranians to be tolerant” which is often overlooked in the current political climate.